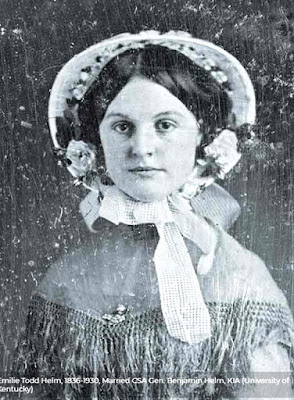 Emilie was the daughter of Elizabeth and Robert Todd of Lexington, Kentucky. Her father had 14 children by two wives. Among Emilie's half sisters was Mary Todd Lincoln who would become First Lady of the United States a few years after this portrait of Emily was taken. 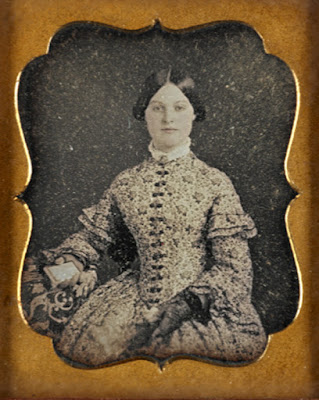 Emilie's wedding picture, perhaps, 20 years old, 1856.
Most of the photos here are from the University of
Kentucky Libraries. 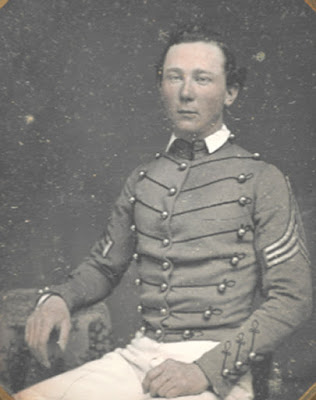 Benjamin Hardin Helm (1831 - 1863)
She made a good marriage, wedding the son of a recent Kentucky Governor. Lawyer Ben Hardin Helm had graduated 9th in his class the U.S. Military Academy and was related to many important Kentucky families, Barbours, Hardins and numerous Helms.
When the Civil War began Emilie's brother-in-law Abraham Lincoln offered the West-Point-trained Helm an office in the Union Army but the young man refused and raised a company of Kentucky Confederates. Kentucky remained a Union state and Helm's soldiers were called the Orphan Brigade as they had no secessionist "Mother state." 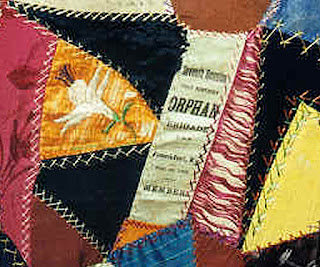 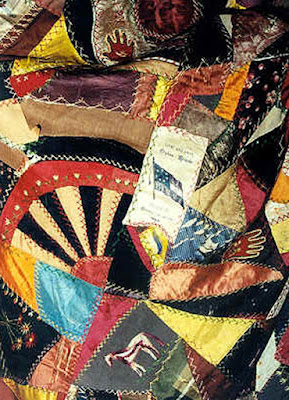 https://www.history.henrycountyky.com/quiltdetails.htm
General Ben Hardin Helm was killed at the Battle of Chickamauga in September, 1863, leaving Emilie with three children under seven years old 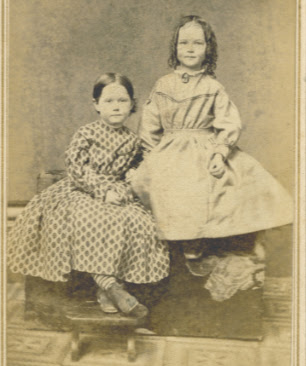 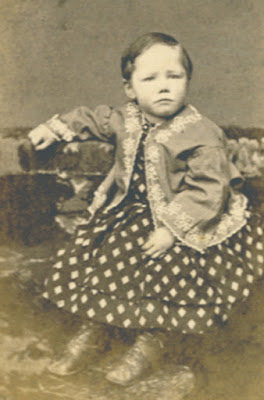 Ben Harding Helm Jr. was about 18 months old when
his father died.
Emilie, living in Georgia, wanted to return home to Union Kentucky but refused to sign the required loyalty oath. Abraham Lincoln, fond of his young sister-in-law and her husband, allowed Emilie to cross the lines without the oath to stay at the White House for several weeks. Many years later daughter Katherine published her mother's diary account of her visit to her older half-sister. 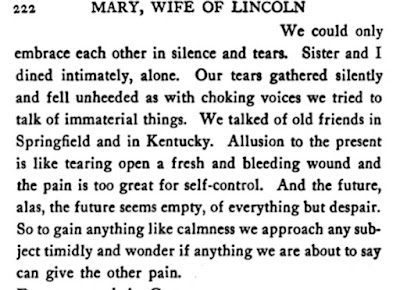 Mary's heart was broken over the recent death of her son Willie.
She and Emilie had lost two Confederate brothers as well as Ben. 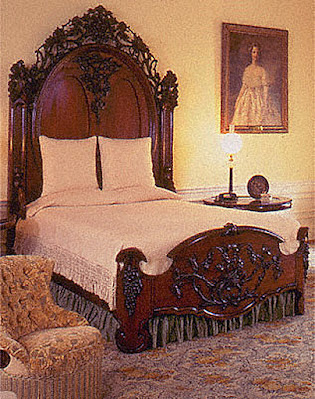 Emilie was given the "Prince of Wales" bedroom (Prince
Albert had slept here in 1860), now called the Lincoln bedroom.
Mary's decor did not cheer Emilie up:
“The purple hangings seem gloomy and funereal though brightened with yellow cords."
She soon joined her mother in Lexington with her children and spent the next 65 years filling the role of Confederate widowhood. Survivors of the Orphan Brigade declared her the Brigade's Mother and she attended reunions well into the 20th century. 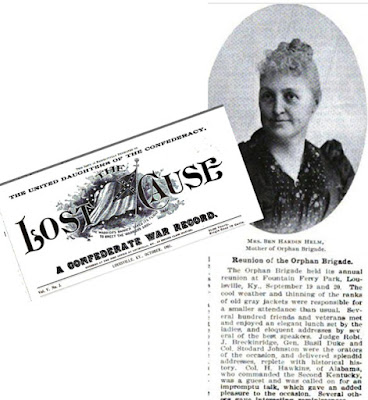 The United Daughters of the Confederacy's magazine Lost Cause
published a short piece on the 1910 reunion with Emilie's photo. 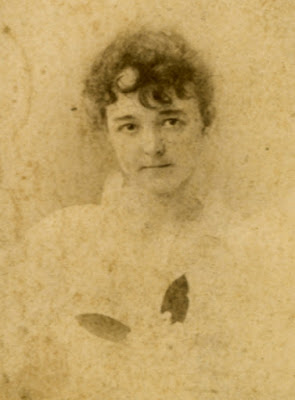 Katherine Riley Helm (1857-1937)
Emilie's daughter Katherine, a painter and a writer, published a biography of her aunt Mary in 1928. The True Story of Mary, Wife of Lincoln containing the Recollections of Mary Lincoln's sister... was based on Helm family papers (now in the University of Kentucky Library). Katherine Helm included excerpts from letters and from her mother's missing Civil War diary.
Dr Angela Esco Elder who has written about Emilie in her dissertation and a book chapter is not nearly as skeptical as I am on the authenticity of that diary and the facts in Katherine's book.

"This dairy is missing. Most historians believe that Emilie burned it just before she died because it contained 'too much bitterness.' " 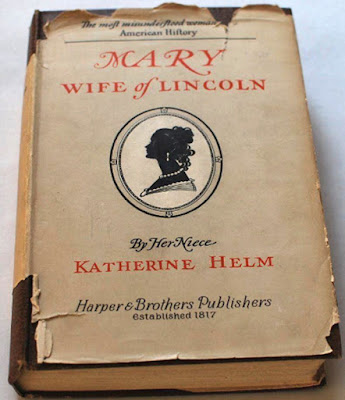 "Historians should read this text with a critical eye, as it was written and published decades after the war. Emilie...carefully crafted the image of the Todds and Lincolns that she showed the world in the postwar period. Some stories in this book, when compared to other sources and historical fact, ring true; others do not." Angela Esco Elder 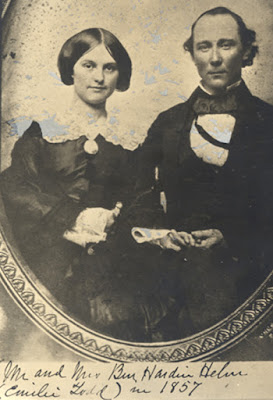 Embellished to support the myth of the Lost Cause or not Emilie's loss of a loved husband was a tragedy. The Todds suffered many.
I've never seen a quilt made by one of the many Todd sisters or sister-in-laws. But see posts on quilts by members of the Helm and Todd families. 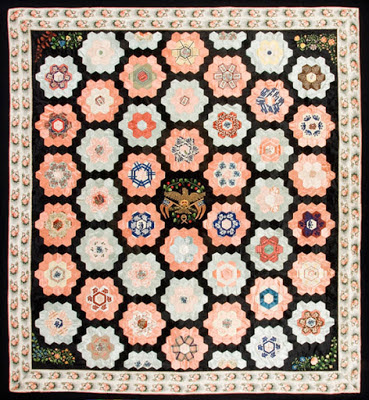 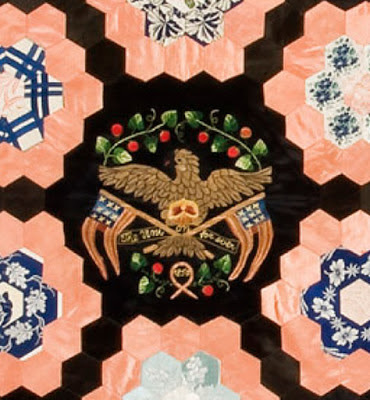 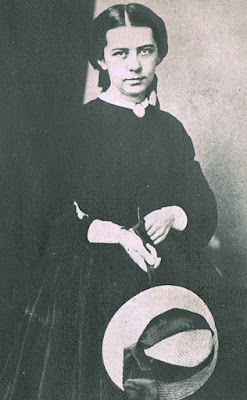 Elizabeth Pendleton Hardin (1839-1895) was first cousin to Emilie's husband Ben Hardin Helm.
After the war was over Lizzie, sister Jimmie and her mother visited Hardin's (as she called him) grave in Atlanta. 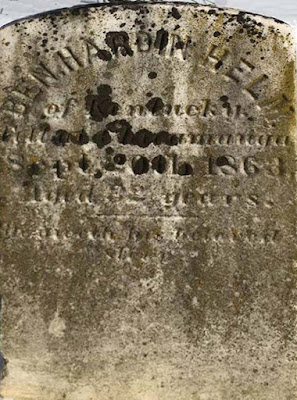 He was reinterred in Elizabethtown, Kentucky in 1883.
On their first visit they couldn't find it in the overgrown cemetery where cattle grazed. On a second trip:

"We found Hardin Helm's grave in a private lot, covered with the withered fragments of what had once been fresh flowers, placed there by some unknown hand."

This is a story I new nothing about. I've read Mrs. Lincoln's Dressmaker, and maybe that had a reference, but other than that I don't now much about the Lincolns and Todds. I've downloaded your references and will read up on this Union/Confederate family! I know there must have been many split families.

More fascinating reading. As always, a pleasure. Thank you, Barbara!

You always find such interesting information to share with us, thank you!