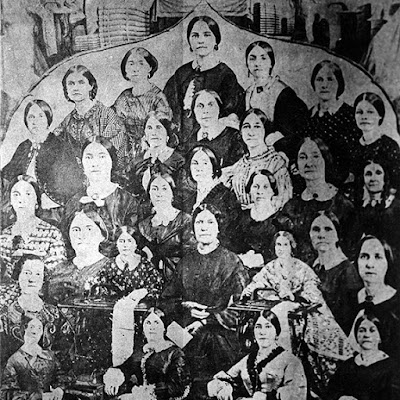 1861 Collage of the members of The Ladies’ Soldiers’ Friend
Sewing Society of Tallahassee, Florida.
State Archives of Florida
Individual portraits of 27 women have been combined. On the whole they look young to middle-aged and by their hairdressing and collars most of the portraits seem to be taken in the 1860s. 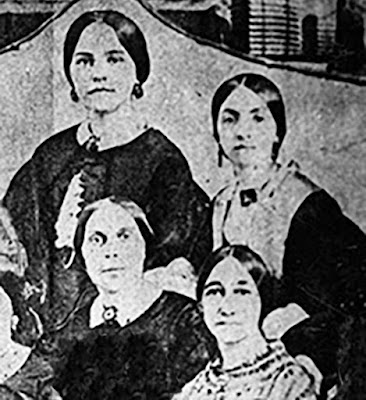 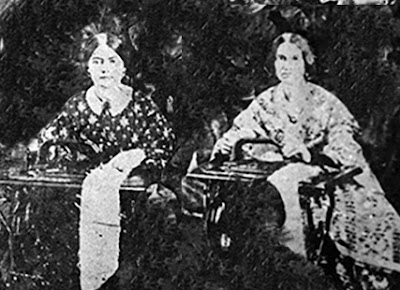 Two women posed with a simple sewing machine
One might guess the photographer visited the women at work
at the society.

Most appear to be dressed for a day's sewing
rather than a formal portrait.

Under the faces is a Key with numbers but the photo is not clear enough to see the numbers on the women or read their names. At top left it says Photographed by J. Sachi---or something similar. Sache, Sachs? A quick look at early Florida photographers reveals no one with that name.
We can see that MT (?) Barnard is President.
The Archives has recorded names of some of the women in the key.

Our best bet for more information is probably Mrs. Bradford 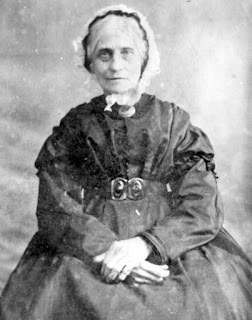 Likely Martha Lewis Branch Bradford (1806-1892)
who would have been about 55 when the Civil War began.
In 1861 Martha had three daughters, Margaret about 23, Susan 15 and Martha who is harder to track. The older Martha lost several other children as infants and young adults but Margaret and Susan lived long lives, Susan dying at 96. 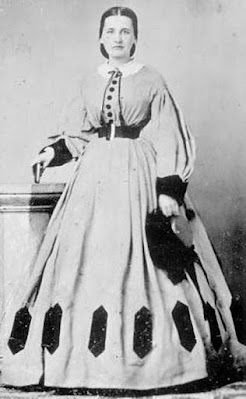 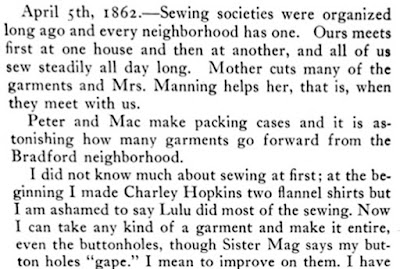 After a year of war Susan was learning clothing skills as she sewed for the soldiers although Sister Mag accused her buttonholes of "gaping." Lulu, Peter and Mac who assisted in the sewing and packing were three of the 150 or so slaves at the Bradford plantation called Pine Hill. Lulu (Lula Dennis) had raised Susan as her nursemaid or mammy, taking over the baby's care at the age of 18.
Earlier Susan had described Lulu's finishing those shirts. "She sews so neatly and she makes all my clothes, under Mother's direction. These shirts are blue and they are to have real silver buttons, which Aunt Sue has had made at the jewelers."
"Lulu is a wonder at pressing and making over." 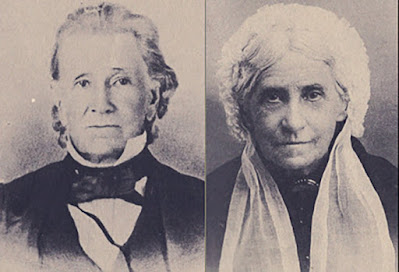 Edward Bradford and Martha Branch Bradford
When the war was over and Lulu came to understand that she was free she got into an argument with Martha who banished Lulu and daughter Hannah. They appeared glad to go. 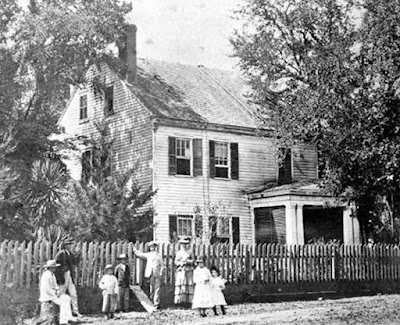 Pine Hill after the war.
The abandoned house in Bradfordville lasted into the 20th century 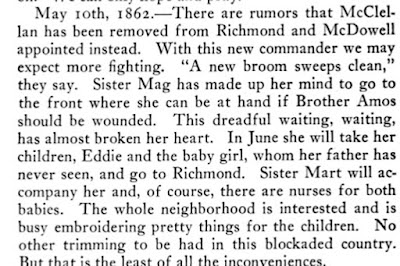 Mag was married to Amos G. Whitehead of the 2nd Regiment in the Florida Infantry and had two young children. "This dreadful waiting, waiting, has almost broken her heart." Amos lost a foot at Sharpsburg/Antietam in the fall, but survived the war only to die a few years later at the age of 37, probably from that injury.

Christmas, 1862:
"Brother Amos...can handle his crutches better than at first. He can walk about in the house but has to have help to go down the steps.  There are so many poor crippled soldiers. Oh, if this terrible war was over!" 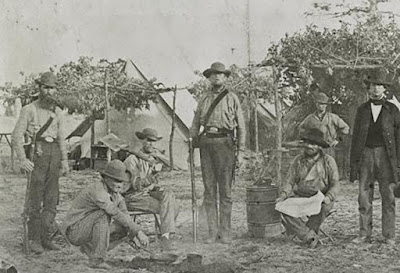 Confederates camping near Pensacola, 1861
Library of Congress.
Susan had her eye on another Florida soldier, writing "the very best marksman in the company proved to be Nick Eppes, a stripling of seventeen, as pretty as a girl and looks like one, too." He came to dinner after surviving the Battle of Gettysburg and they fell in love, marrying soon after the war. 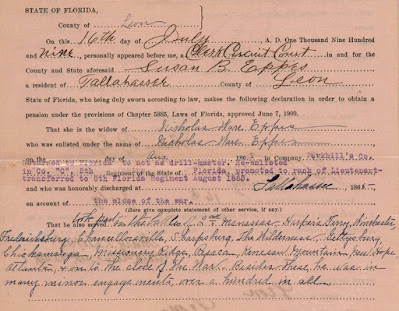 Susan's pension application in 1909 detailing Nick Eppes's
war experiences.
She and Nicholas Ware Eppes (1843- 1904) were well matched; both considered themselves members of Florida's elite society with pedigrees based on descent from powerful politicians. The Bradfords rested on the laurels of Oliver Cromwell and Governor Bradford of the Plymouth Colony in  Massachusetts. Martha's father was a North Carolina governor. Nicholas Eppes was Thomas Jefferson's great-grandson---all "men of wealth and often of distinction." 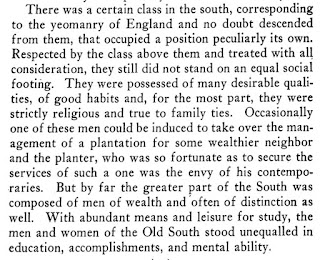 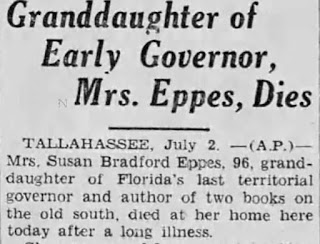 Susan's diary of the war and Florida reconstruction was published in her book Through Some Eventful Years in 1926. 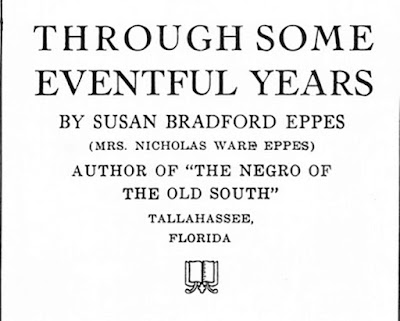 By then she had a reputation as a chronicler of Southern nostalgia
with her 1925 memoir: The Negro of the Old South:
A Bit of Period History by Mrs. Nicholas Ware Eppes.
https://catalog.hathitrust.org/Record/000407968
Both books are full of cliches:

“These Aristocrats of the Old South are beloved by the negroes... hard for an outsider to understand the loving kindness of the ex-master and the respectful love of the ex-slave.”

But her accounts are interesting (if one can get through the dialect and the condescension) because she reveals the disconnect between how she thought people like Lula Dennis felt and how they revealed their true feelings once that was permitted. 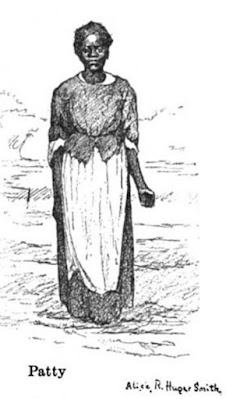 Patty of South Carolina, portrait
by Alice Huger Smith
One woman, a maid and cook planning to leave, was asked who would feed the family? "I don't care," was the perfect answer but one Susan found hard to understand. She remained clueless. 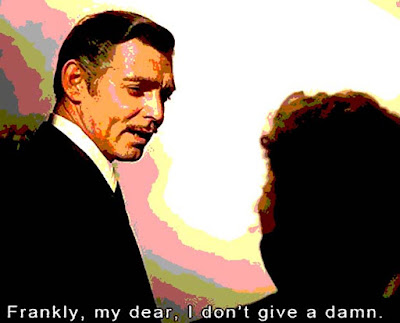 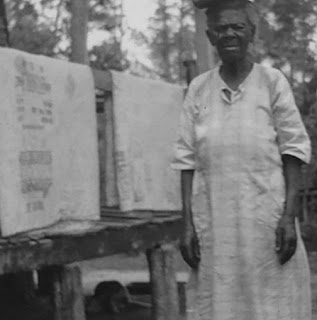 Daphne Williams, photographed by the WPA in 1938
at the end of a long life, was born a slave in Tallahassee
but moved to Texas when the plantation owner thought
liberation a threat. Are those quilts behind her made of
feed sacks?
Posted by Barbara Brackman at 6:00 AM

What an interesting post! Thank you Barbara for all you do. I have loved reading your blogs for many years. Thank you very much😊