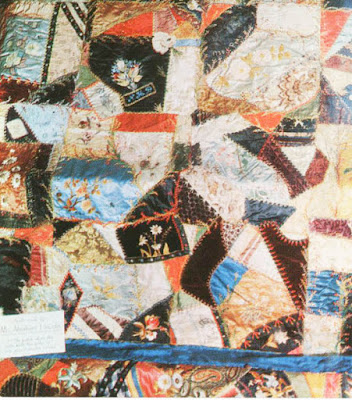 The label on this old photograph of a silk crazy quilt
is hard to read but it definitely says
"Quilt made by Mrs. Abraham Lincoln" 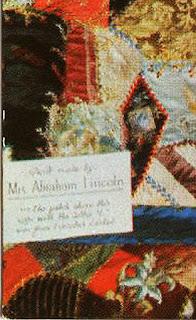 I've been reading about Mary Todd Lincoln and I was surprised to see this attribution. She did have a thing about collecting fabric, especially expensive silks, perfect for a high-style silk crazy quilt a national fad in the 1880s. But....

The first thing I did to check out the story was look up the date of Mary Lincoln's death. She died at 63 in Springfield, Illinois on July 16, 1882. Some biographers believe she had untreated diabetes; she was an invalid who lived in shaded rooms for months before her death at her sister Elizabeth Edwards's house. Her vision was poor and she complained of headaches and the light hurting her eyes. I feel confident she was not doing any sewing in 1882. 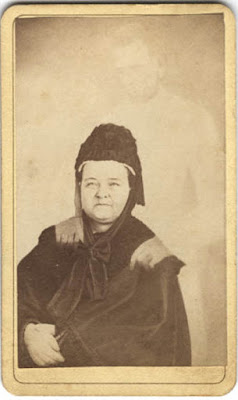 1871 Photo of Mary Lincoln with
the late Abraham Lincoln superimposed.

Mary Todd Lincoln could not have made this quilt based on the dates of her death and decline and the advent of the crazy quilt style, which is about 1882 or 1883.

See a post on the beginning of the crazy quilt fashion here:
http://barbarabrackman.blogspot.com/2010/09/crazy-quilt-outliers.html

Did Mary Lincoln make quilts? You know, everybody quilted in the years she was a young housewife in Springfield raising four boys. Her first son Robert was born in 1844 when pieced and appliqued cotton patchwork was the fashion. 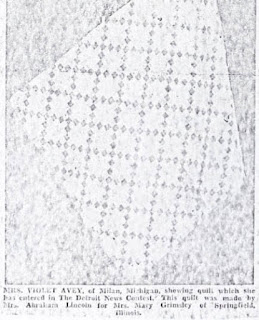 I have another old photo, a photocopy of a newspaper clipping from the Detroit News, showing a nine patch child's quilt with the caption:

"MRS. VIOLET AVEY, of Milan, Michigan, showing quilt which she has entered in The Detroit News Contest. This quilt was made by Mrs. Abraham Lincoln for Mrs. Mary Grimsley of Springfield, Illinois." 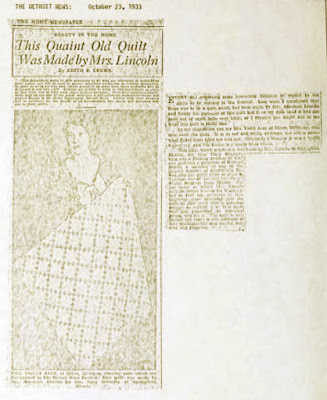 Edith Crumb, women's feature writer for the newspaper, mentioned the quilt in two articles in October, 1933. Here's the second article from the Quilt Index.

"EVERY day something more interesting happens in regard to the quilts to be entered in the Contest. Last week I mentioned that there was to be a quilt which had been made by Mrs. Abraham Lincoln and Friday the processor of this quilt laid it on my desk (and it had not been out of moth balls very long), so I thought you might like to see what this quilt is really like. In the illustration you see Mrs. Violet Avey of Milan, Michigan, who now owns the quilt. It is in red and white, although the red is somewhat faded from hard use and age. Originally I imagine it was a bright turkey red, and the design is a single Irish chain. This quilt, which is crib size, was made by Mrs. Lincoln in Springfield, Illinois, for Mrs. Mary Grimsley, who was a lifelong resident of that city and was a daughter of Richard Burch, a member of one of the pioneer families of Springfield. She was also the great niece of Jesse B. Thomas, one of the first two United States senators from Illinois. The last meal of which Mrs. Lincoln partook before leaving for Washington in 1860 was prepared by Mrs. Grimsley. Mrs. Grimsley gave the quilt to Mrs. Avery (sic?)who is generous enough to exhibit it so that those who are interested in historical pieces may see it. The quilt is very ragged but there is still evidence of fine workmanship and careful cutting and planning."

"She played with the Lincoln children and when the family was leaving for Washington, Mrs. Mary Todd Lincoln visited her just before going to the train."

This Turkey red and white quilt is a style that could well have been made in the 1840s. I've had no luck in finding out where it is today. It was rather worn in 1933. Has it survived? Did Mary Lincoln actually make it?

Questions with no answers. 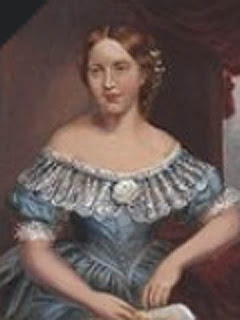 The only mention I've yet found of quilts in Mary Lincoln's published writings is in a September 20th, 1857 letter to half-sister Emilie Todd Helm, in which she mentions Julia Edwards Baker, their sister Elizabeth's daughter. Mary did not care for this niece, who turned out to be as eccentric (a polite term) as Mary.


"Julia & Mr. Baker are in Peoria, at the fair, from thence go to St. Louis. At the county fair, here last week, Julia's last quilt (which makes her third one) a very handsome silk one took the premium, she trusts for the like fate at Peoria & St. Louis---she has nothing but her dear Husband & silk quilts to occupy her time. How different the daily routine of some of our lives are...."

The snideness seem to relate to Julia being childless (she was only 20)---or perhaps vain about her needlework.

Julia won a prize in Peoria the next day, the highest amount given in the category of Needle, Shell & Wax Work---$8. (Hah! Aunt Mary) 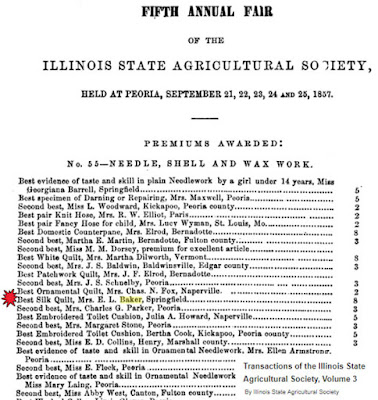 The letter is in Mary Todd Lincoln: Her Life and Letters, edited by Justin G. Turner & Linda Levitt Turner.

Quilts made by Mary Todd Lincoln???

Pretty doubtful.
Posted by Barbara Brackman at 6:00 AM

So interesting. Living here in IL I am intrigued about all things Mary Todd Lincoln. Diabetic? Wow! Never heard/thought about that possibility. Thank you for the informative (& humorous) post.

I don't think we would have enjoyed being around her Susie.

I read that the Lincoln’s had spiritual seances at their home. Mrs Lincoln shut herself up after Mr. Lincoln died. What sad times they lived in. I doubt Mrs. Lincoln made quilts.

How interesting! I have recently discovered I am a distant cousin of Mary Todd Lincoln. My paternal great-grandmother was a Todd.