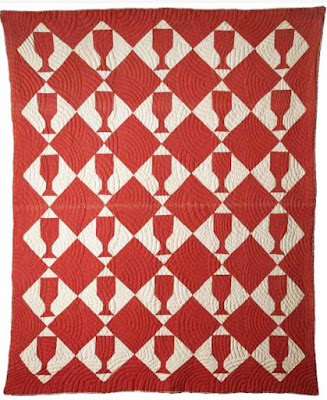 Chalice Quilt, Marshall, Texas
Estimated Date
"From 1855 (circa) to 1865 (circa)"
Collection of the American Museum in Britain
Acquisition number 1983.172

The quilt was given to the Museum by Mrs. W. Webster Downer, probably Marguerite Linam Downer (1920-2011). A 1983 publication listed the recent acquisition:

"Mrs W. Webster Downer has donated a quilt made by slaves on the Mimosa Hall Plantation, Texas. Legend has it that when the Bishop came once a year from New Orleans to confirm, baptize and marry his scattered flock, and stayed with different families on the many cotton plantations in the area, it was the custom to make a new quilt for his use on each visit."

The Museum has a second quilt with a connection to the Downer family. 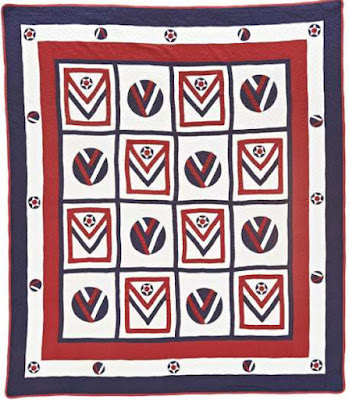 "Mary Earle Webster Downer made this quilt for her grandson during the Second World War. She lived on Mimosa Hall plantation in Marshall, Texas"

Mary Earl Webster Downer (1878-1956) was probably Marguerite's husband's grandmother. Web Downer, the soldier honored with the quilt, was an army attache in Belgrade after the War. Web and Maggie Downer lived in Europe and several U.S. cities, finally settling in Carmel, California. After William Webster Downer's death in 2006 he was buried in the family cemetery at Mimosa Hall in Marshall. 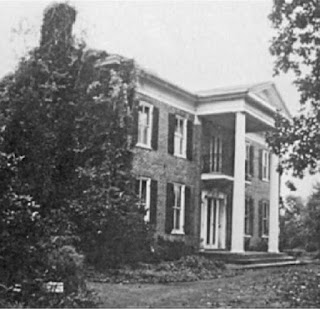 Mary Earl Webster Downer's grandfather John Johnston Webster went to East Texas from Tuscaloosa, Alabama with his family and slaves and built this mansion in the 1840s. The 1850 census lists 80 slaves at Mimosa. The house survives with the family burial ground on the property.

Marguerite Downer, the quilts' donor, was a Louisiana-born woman who appears to never have lived in Marshall. We assume she told the curators the Webster family history of the quilts as she recalled hearing about it from her in-laws.

From the online catalog for the American Museum in Britain:

"This quilt was made by slaves on the Mimosa Hall Plantation in Marshall Texas for the use of the Anglican bishop of New Orleans. Each year the bishop would tour the region’s cotton plantations to perform baptisms and marriages. After his departure, quilts made for his visit were given over for slave use."

The major flaw in this tale is that the quilt looks to have been made about 1900, many decades after Emancipation in the 1860s. The quilt may have been made by former slaves who had lived or still lived on the property. But there is very little likelihood that this quilt was made before 1880. 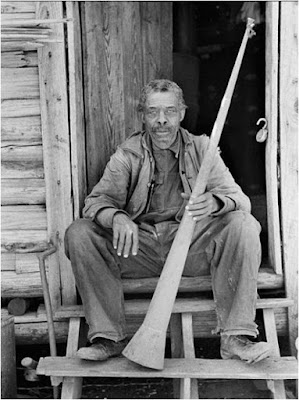 Man born into slavery posing with a horn used to call field workers,
photographed by Russell Lee in Marshall in 1939. 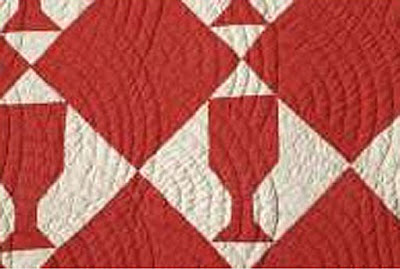 The catalog describes the quilt.


"The Chalice Quilt c.1860, Mimosa Hall Plantation, Marshall, Texas.
221x191 cm (87x75 in)
Thirty white blocks with red pieced chalice-shaped motif (... 9 in), set on point and sewn by hand, alternate with solid red squares. Three pieces of machine-stitched red and white striped cotton form the backing, which has been folded around the edges to bind the quilt. Semicircles, hand-quilted in white thread, decorate the entire surface." 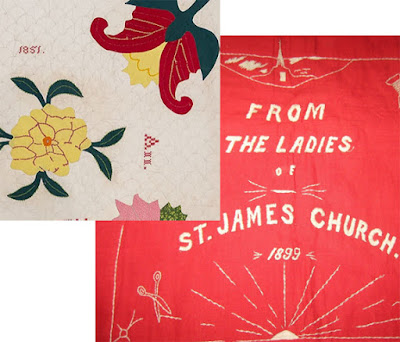 The fabrics offer little assistance in dating. Plain red cotton presumably dyed in some form of  colorfast Turkey red dyeing process and a plain white would be available in 1850 as well as 1910. 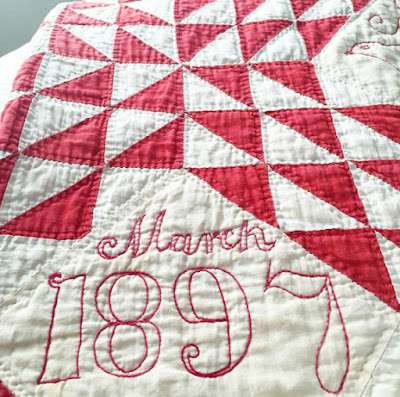 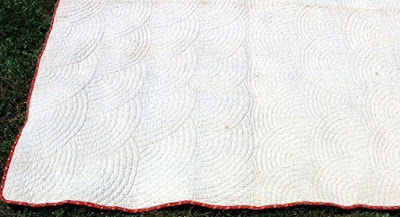 Back of a quilt quilted in the fan pattern.

Quilting style is also helpful here. The semi-circles described are a kind of concentric quarter-circle in a shell pattern. Today we call them fans. The all-over design is typical of quilts made after the Civil War, although there are a few exceptions.

The quilt's size (75" wide by 87" long) is also a weak clue. Narrow beds were common at the end of the 19th century. Mid-19th-century quilts are often far wider to cover larger beds.

The patchwork pattern is the strongest clue. Variations on the idea of a goblet or glass tumbler were often made in the years 1890 to 1950. The pattern was first published as Tumbler in 1907 in the magazine American Woman, according to pattern historian Wilene Smith. 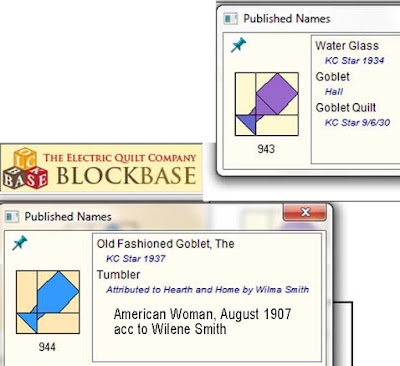 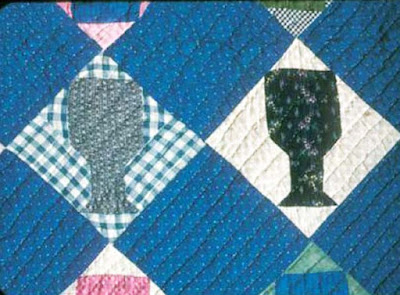 I have many photos of quilts made in the design such as this one
documented in the Quilts of Tennessee project, made by
Addie Lee Cope Butler. Note the black print with a bright figure on the right,
typical of the 1900-1920 years. 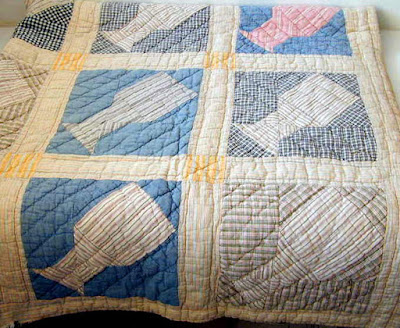 Woven checks and plaids were quite fashionable for quilts in the teens. 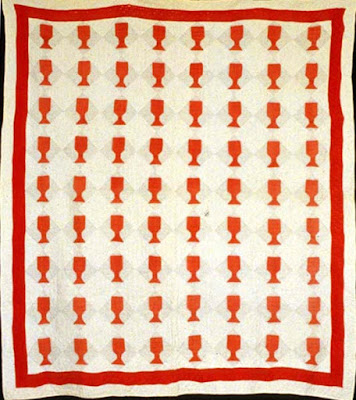 A red and white version from the Nebraska project.
The gray was once brighter but has probably faded
due to the unstable synthetic dyes introduced about 1880. 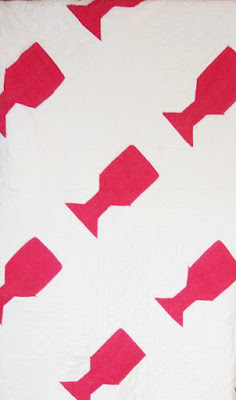 Another Turkey red and white version
from an online auction. 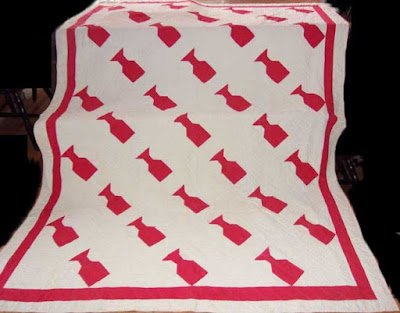 I am quite confident that the Mimosa Hall quilt in the American Museum in Britain was not made by people in slavery before 1865 but rather between 1880 and 1920 and most likely after the pattern was published in 1907. The corrected date calls into question the whole story about a chalice quilt made for an itinerant Anglican Bishop. (Were there itinerant Anglican Bishops from New Orleans in Texas?)

One source for more information about the Websters is Mary Downer's father's journal of plantation life during slavery days. John B. Webster's Plantation Journal survives in the family collection.

I wouldn't be so concerned about a false story except that this quilt is often used as an example of slave-made quilts with authors drawing conclusions about the genre based on an incorrectly attributed quilt.

The museum needs to change its cataloging information: Perhaps:

In 1983 Marguerite Linam Downer [Mrs W. Webster Downer] donated this quilt from her husband's family, the Websters,  who lived at Mimosa Hall Plantation in Marshall, Texas with the family legend that it was made by African-American people connected with the family during the days of slavery. Quilt style and pattern indicate that it was made decades after slavery was abolished from a pattern first published as Tumbler in 1907, so the family tale is doubtful. For another quilt from William Webster Downer's family see the World War II quilt made by his grandmother Mary Earle Webster Downer.

You go girl! That story about the Anglican Bishop of New Orleans (there wasn't one) traveling before 1865 all the way to Marshall Texas to perform the sacraments where this quilt was made for him by the slaves and given back to "the slaves" after his departure is the most preposterous provenance story I've ever heard about a quilt. One quilt "given" to 80 slaves, and it shows no wear??? The style, pattern and quilting all point to a later date, but just the story on its face is absurd.

Has the museum been made aware of this? I inherited a family quilt that I was told was from the late 1800s. It's a g-mother's flower garden clearly from the 20s. I love it, but for what it is not for an inaccurate date.

Besides, in the US the denomination is "Episcopalian" - tho' somebody may have transcribed as "Anglican" to please the Brits visiting the museum in Bath? hh