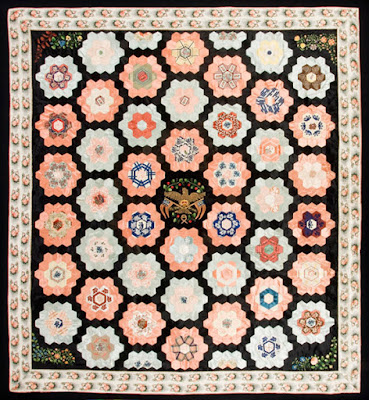 The Winterthur Museum's online catalog has several photos of this beautiful silk hexagon quilt. See a link below. 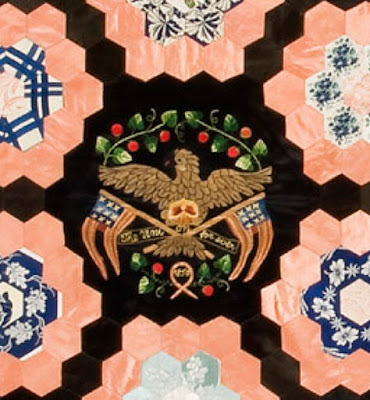 Elizabeth Helm Walker Stone was about 22 when she dated this quilt in 1850. The quilt and genealogical records tell us she was from a privileged family in Madison County, Kentucky.
The 1860 census's slave schedule lists 28 people living under her husband Robert Rodes Stone.

Despite being a slaveholder Elizabeth seems to have had strong Union sentiments as did Robert Rodes Stone (1817-1893) who attended Harvard Law School and became a Colonel in the Union Army. They married in 1844 and the year the quilt was dated had one child Anne Rodes Stone, about five. 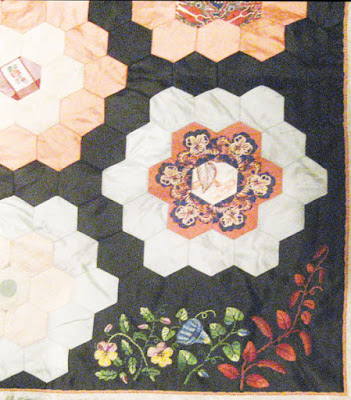 His obituary tells us that his father had "a large landed property...he preferred the simple, independent life of a country gentleman, which he never abandoned until the war and emancipation made it no longer pleasant or desirable....He married Elizabeth Helm Walker, one of two daughters of a prominent citizen of Madison County."

Elizabeth's obituary records she was born in Woodford County at "Helmsley, the ancestral home of her mother" near Versailles, Kentucky. The Helmses, originally from Virginia, remained a prominent Kentucky family. 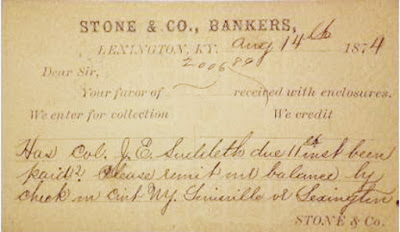 After the Civil War Robert and Elizabeth moved with the times, relocating to Lexington where Robert became a banker, described as "a wealthy capitalist" after his death. Their two daughters Laura, born in 1854, and Annie eventually shared "the magnificent estate" left by Robert becoming two of the "the wealthiest women in Kentucky," according to Annie's marriage notice.

The Stones used their money to travel. "Mrs Stone was a woman of literary taste, and having traveled much, after an extended tour in Europe...published a book of travels and sketches of life in foreign countries. She was a fine conversationalist, witty and original," according to her obituary. 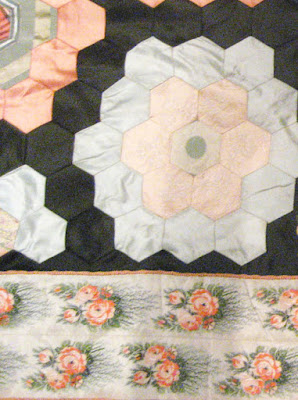 The quilt descended in daughter Laura Kinkead's family. Annie did not have children, and in fact was only married for several weeks late in life. In 1895 "A Romance in Life" circulated among U.S. newspapers telling the sad story of her marriage to Arthur Nithsdale Maxwell, British Royalty, who died two weeks later. Three months later another story was published wondering if the marriage ever existed. Returning to Lexington "Miss Stone, or Mrs. Maxwell, was suffering from the terrible shock....Her family thought it best to take her south, and about the middle of November she and her mother left for Florida." 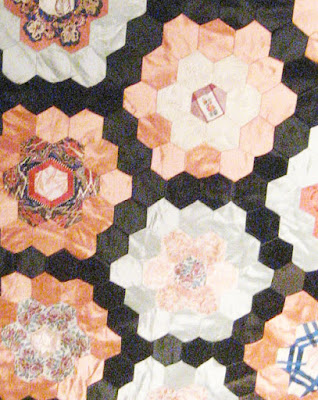 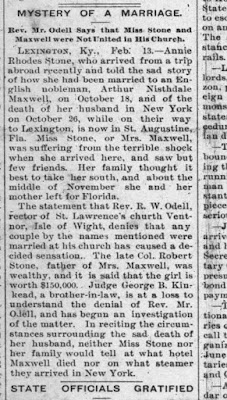 The easiest way to see this quilt at the Winterthur's web page is to go to the search page:
http://museumcollection.winterthur.org/
And do a search for Helm. Scroll down till you see the quilt. 2008.0023

Beautiful quilt, sad story... may or may not have been really married, and was perhaps being swindled for her money?