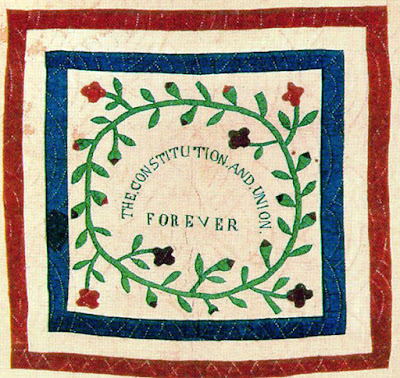 Center of a quilt made by Elizabeth Moffitt Lyle Moffitt,
Kewanee, Illinois

We documented this quilt during the Kansas Quilt Project thirty-some years ago and were a little confused about its date---pre-Civil War or made during the War? 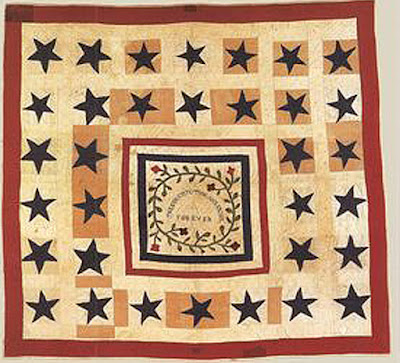 I thought I might revisit it in the internet age hoping to find more about when and why it was made. The quilt is in Salina, Kansas donated to the Smoky Hill Museum by Elizabeth Moffitt's Illinois relatives. The story that accompanied the quilt is that Elizabeth in her late 20s had help from younger brother John Leitch (Jack) Moffitt who cut the five-pointed stars for her. Elizabeth was a childless widow, having lost first husband Thomas Lyle after a year of marriage. He died at 29 in Denver, probably there for the gold rush. 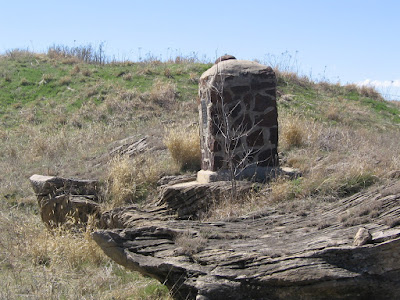 Monument to the Moffitt brothers and friends near Beaver Creek

The Moffitts and Lyles seem to have been an adventurous bunch. Brothers Jack and Thomas Moffitt also traveled west in the spring of 1864, settling in Lincoln County, Kansas to raise cattle. They established a house on Beaver Creek, the first white-built home in the area. In August, 1864 ignoring threats from the local tribes who were furious about settlers hunting on their land, the young men went buffalo hunting with friends. A group of Native Americans engaged in a battle with them and people were killed on both sides, including all four young cattle ranchers. 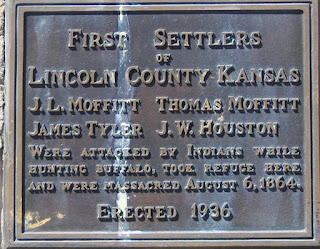 Seeing this territory battle as an Indian massacre, later settlers erected several monuments to the Moffitt party as "first settlers."

The Moffitt party was only one group
of  settlers killed in Lincoln County as
the tribes tried to maintain their land.
This 1909 monument recalls others. 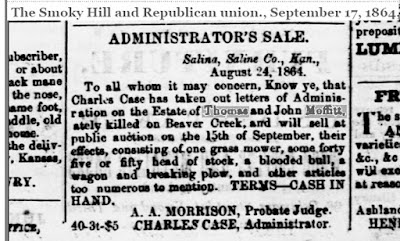 The brothers left fifty head of cattle sold in their estate sale.

The Moffitts of Kewanee, Illinois, which is northwest of Peoria, were Irish born. 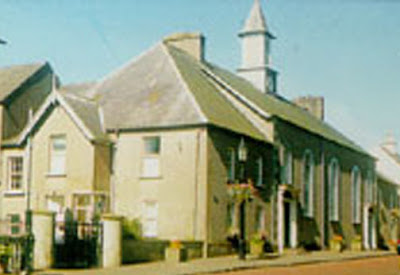 Elizabeth Nichol of  the Isle of Guernsey and David Moffitt of County Antrim had their nine children in Grace Hill in County Antrim, a Moravian settlement, and came to Philadelphia some time in the 1840s, perhaps with others of the Moravian religion. They moved west to Kewanee sometime after its development in 1854.

It is interesting to note that the younger Elizabeth's patriotic quilt was made by an immigrant who spent the first ten years or so of her life in Ireland. What is the quilt's date? Jack Moffitt died in 1864 so we will assume it was made before that date. 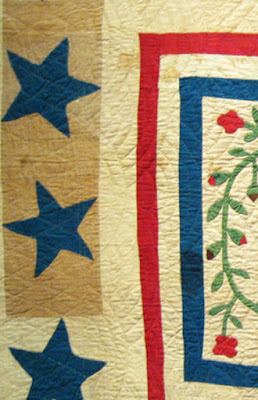 Was it made during the Civil War or beforehand? The fabrics, all solids give us no help in dating. The quilt's style is similar to patriotic quilts made after 1850 or so. 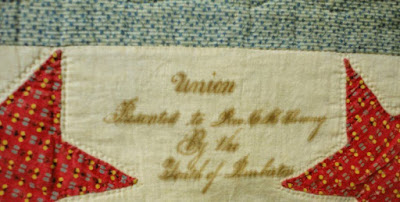 Here's a post on a similar Union quilt possibly made before 1861. 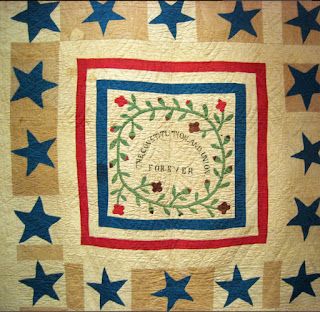 Perhaps the sentiment in the quilt's center can help date it. The phrase "The Constitution and Union Forever" does not seem to have roots in any particular oratory in the years before or during the Civil War. Certainly there were many references to "The Union Forever." 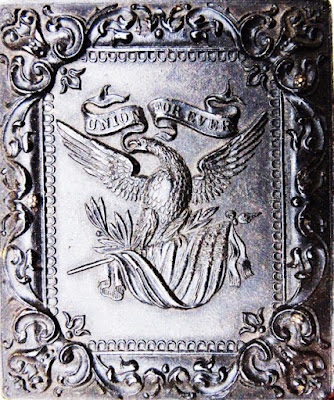 The "Union Forever" on a photograph case 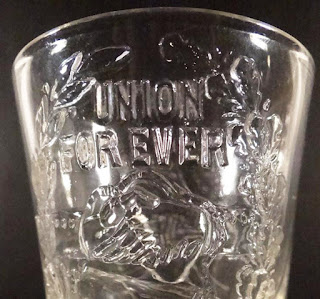 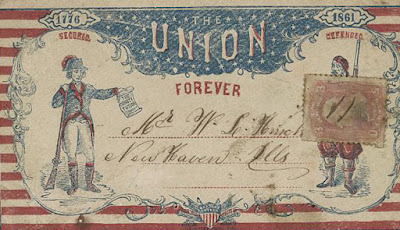 and a patriotic envelope.

A discussion on Slate of a similar phrase makes me wonder if Elizabeth had heard of  Hubbard Winslow's 1853 call to action in Massachusetts with the ideals in reverse order, "The Union and the Constitution Forever." But that is pretty obscure.

The idea must have been in the air. 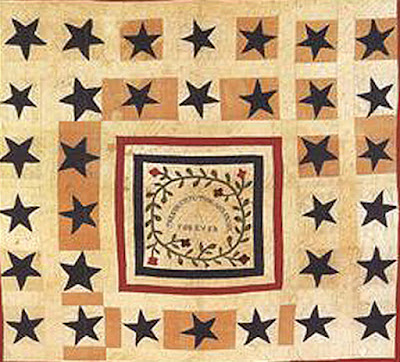 Our best clue to date might be the 33 stars. The U.S. flag contained 33 stars from July 4, 1859 when Oregon was counted as the 33rd state to July 4, 1861 when Kansas was added. Kansas actually became a state in January, 1861 before the war began but stars aren't added till the following July.

It is possible that Elizabeth counted her stars precisely and made the quilt sometime in those two years while she was getting over the shock of her husband's death. We don't know much more about her. She did remarry in May, 1865, curiously to another man named John Moffitt. This John B. Moffitt (1833-1891) was also Irish born and led an adventurous life. He might have been a relative; he first settled in Philadelphia, traveled around the world fighting pirates and came to Kewanee in 1863. 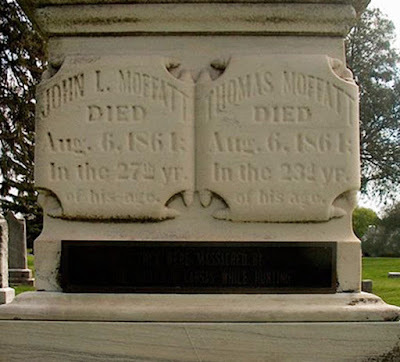 Jack and Thomas are buried near their mother.

All these Moffitts (Moffats) are buried in Kewanee. Here's a link to Elizabeth's page at Find-A-Grave.
https://www.findagrave.com/memorial/28704529/elizabeth-l.-moffitt 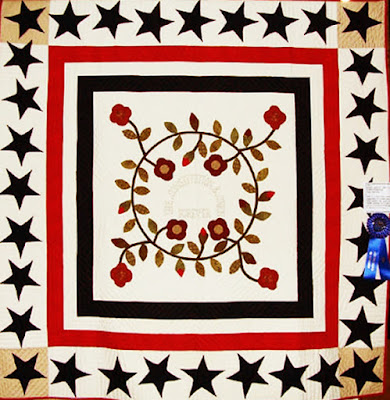 In my book Quilts From the Civil War we did an updated pattern based on Elizabeth's quilt. Here is Nina Ashworth's  prizewinner made from the pattern, Dad's Quilt: The Constitution and Union Forever.

Read about second husband John B. Moffitt in the local history:
https://books.google.com/books?id=WVmspSyKnVAC&pg=PA699&lpg=PA699&dq=elizabeth+moffitt+lyle+kewanee&source=bl&ots=7O7YuDcV41&sig=5ELp-0RHTsI8aje7BV_YTOgVZHQ&hl=en&sa=X&ved=0ahUKEwiN8JOplc7aAhVXyYMKHbe_B7M4ChDoAQg-MAU#v=onepage&q=john%20b%20moffitt&f=false

Very interesting. I'm from Kewanee and have heard the Moffit name.