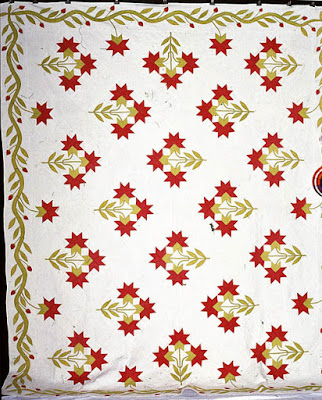 Nearly 30 years ago the Arizona Quilt Project documented a red and green quilt from the Speer family of Lawrence, Kansas (my home town.) A recent gift from mother to daughter, the quilt had been accompanied by the story that it'd been stitched by a distant aunt Mary Spear (sic) Neff of Lawrence.

I knew Mary Speer (at least knew of her.) She was the daughter of John and Elizabeth McMahon Speer, local heroes in our Civil War stories. The Speers were victims and survivors of Quantrill's Raid when Confederate Missourians burned Union Lawrence in 1863. Two of the Speer boys were murdered in the raid. Mary was 13 years old when her older brothers died in the attack on the family's newspaper office.

Here's the link to the file:
http://www.quiltindex.org/fulldisplay.php?kid=67-EC-4BA 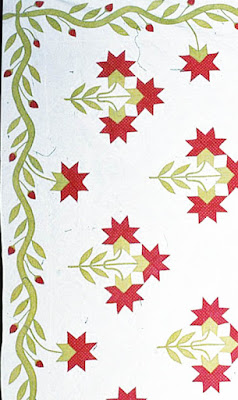 The border cleverly positions a star flower
in the blank spaces.

The quilt is a classic in the pattern we often call Cleveland Tulip or Carolina Lily. The pattern was particularly popular in Ohio, Indiana and Pennsylvania before the Civil War. Mary was born in Medina, Ohio in 1850.

If she indeed made it the most likely date would be after 1865 when she 15 and before her early death at 36 in 1886. This is possible but there are a few style characteristics that make me wonder if the quilt was made in the 1840s or '50s, possibly by Mary's mother Elizabeth Speer. 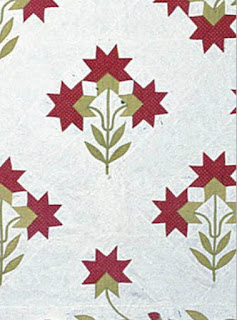 Although hard to see in the picture,
the quilting on the Speer quilt is fancy, described as a
vine and leaf pattern. 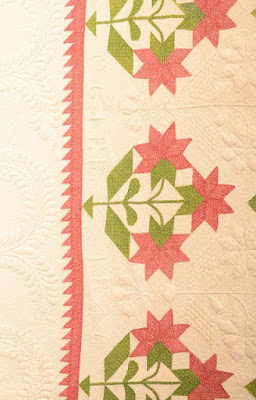 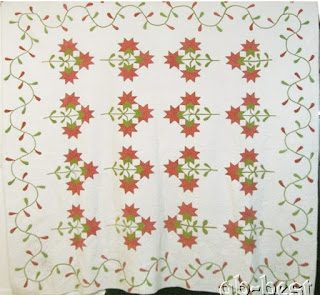 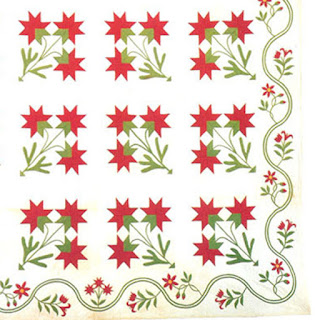 Detail of a quilt date-inscribed 1847 and
signed by Parnell Grumley. She also included the
name "Peony & Prairie Flower".
Collection of the Shelburne Museum 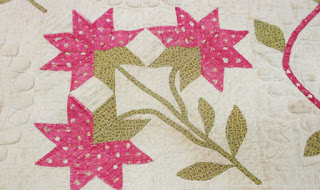 Subtle clues like placing the blocks on point; leaving white space for elaborate quilting, and including a fancy border indicate a date before the end of the Civil War. 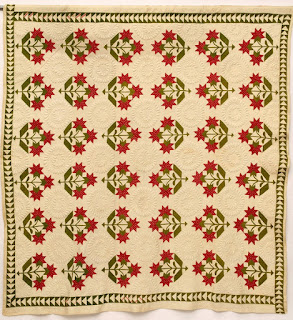 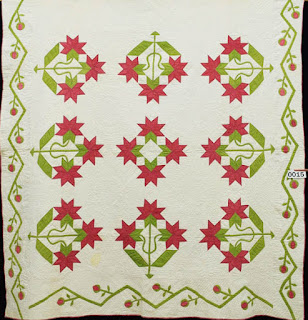 Also from the Arizona project
with no history, found in an antique shop. 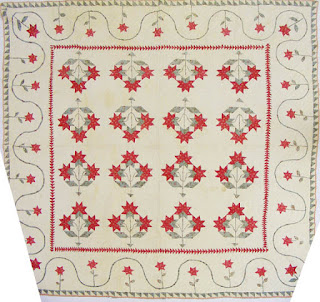 Documented by the Western Pennsylvania Project.
All these undated quilts look to be 1845-1865

Mary's father John Speer was an itinerant newspaperman before he moved to Kansas in 1854, printing and editing papers in Western Pennsylvania, Indiana and Ohio. He married Elizabeth McMahon or McMahan in Corydon, Indiana in 1842. 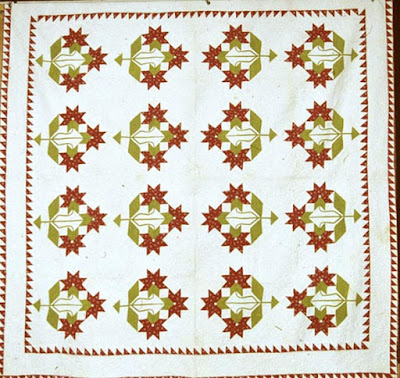 West Virginia Project,
Family thought it to be made for an 1869 wedding.

Another thing that makes me think that Mary did not make the quilt in Lawrence before her 1886 death is that in the Kansas Quilt Project we saw very few quilts made in Kansas before the 1880s. When we checked on stories we generally found that the mid-19th-century quilts were brought here from eastern states. 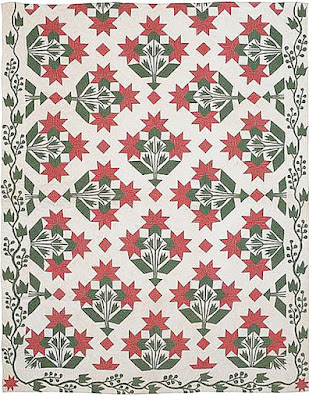 From the Flack Collection

Did Elizabeth Speer bring the quilt with her when she came to Lawrence in 1855? She was born in Corydon, Indiana and lived in Medina, Ohio before going west to be among the first European- American settlers in Kansas. The pattern was certainly being made in those states in the 1840s and '50s. 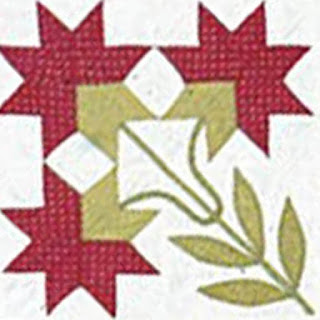 The Block: Perhaps the Speers called it a Peony
rather than a Cleveland Lily.

I've written about Elizabeth Speer before, including a block for her in my out-of-print book Borderland in Butternut and Blue. 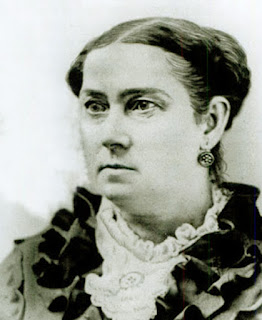 Elizabeth Speer, about 1870,
from the Kansas State Historical Society 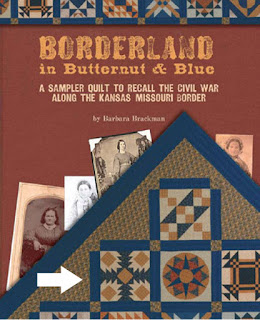 I picked the block Mother's Dream (see the arrow above) because Elizabeth's son Robert was presumed to have been killed in the fire at the newspaper office in 1863 but no remains were ever found. For the next twelve years left to her Elizabeth set a plate for him every night at the dinner table, maintaining her dream that he'd somehow come back from that small Civil War battle.

Whether Elizabeth or her daughter Mary made the quilt, it is a real pleasure to find a link to the Speers and the history of Lawrence.

Read more about the history of the pattern here:
http://encyclopediaquiltpatterns.blogspot.com/2016/10/oldest-carolinacleveland-lily-quilts.html

On my monitor it looks like there is tan fabric in Mary's quilt. Isn't that a faded synthetic green of the later part of the 19t C?

Barbara, you alone are a treasure. When I see old antique quilts, itb rings to mind the maler, the era etc. you make the information cmoe to life, make the people very real.
We can not even imagine how different losing a loved one was. Death was an ever present fact of life. To realize she set a place at table for 12 years in the deep hope her son would walk through the door is so deeply sad.
The qult is beautiful...perhapd they better used their time than we do.
Thanks again
Juliein TN

What a clever way to tie the border into the body of the quilt. Carolina Lily is on my bucket list and I just pushed it a little higher up the list. As always, your posts motivate me. Thank you!

Barbara, I throughly enjoy your emails about these quilts. Thank you so much..

I believe there's always stories on every quilts, just like those quilts above, every single details explains it all.

Some aspects of the Elizabeth Hopkins quilt are reminescent of the Reunion Quilt made in Brooklyn. This quilt is extremely well sewn, the applique circles actually look perfectly circular in shape, a difficult result to achieve.
ตารางคะแนนลาลีกา