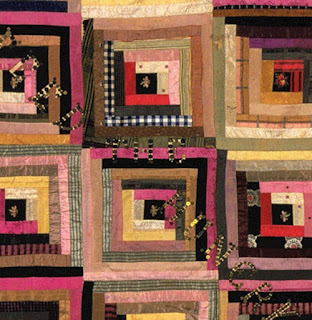 Silk log cabin quilt in the collection of the
Missouri History Museum.

It's hard to see but letters stitched in sequins on the diagonal across the blocks read:
"Feed the Hungry" 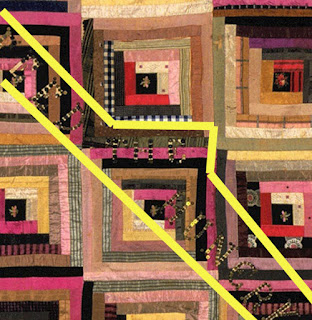 The catalog copy:
"Log Cabin style quilt made in Lexington, Missouri, for a Methodist-Episcopal church bazaar to raise money for families of ex-Confederate soldiers from the Civil War. Spelled out across the front of the quilt is a reminder to parishioners to “FEED THE HUNGRY” in the wake of a devastating war that left families impoverished." 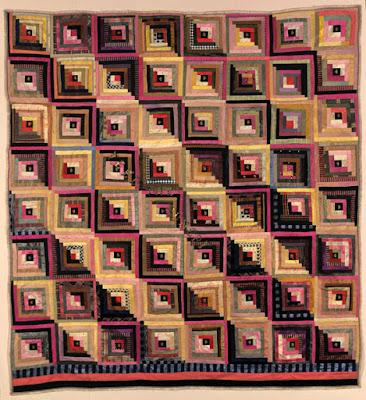 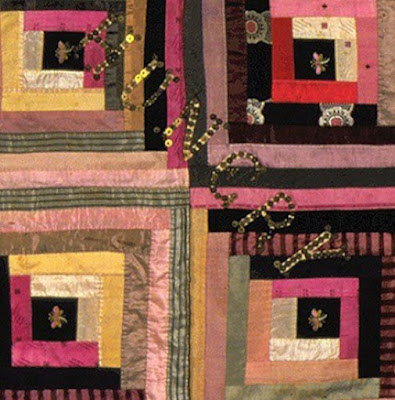 In the center of most blocks is a butterfly, which was cut
from a piece of silk once a dress belonging to
Carolyn Godbey, according to Paula Calvin & Deborah Deacon's book
American Women Artists in Wartime

With an unusual name like Godbey it's not hard to find a little about Caroline's life. 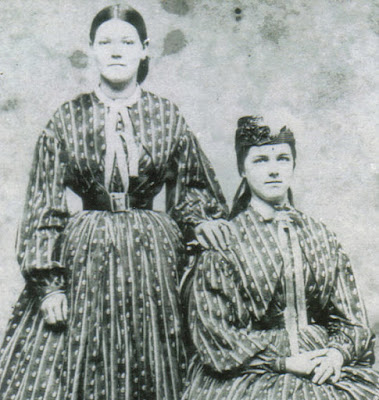 During the Civil War Methodism in Missouri was divided by sectionalism and violence that is hard to believe in people purporting to be religious. The Godbey's were affiliated with the Methodist- Episcopal Church, South. Three M-E South ministers Thomas Glanville, Edwin Robinson and Samuel Steel Headlee were killed in the factional fighting.

Caroline and her husband lived in Lexington in the decades after the Civil War when the quilt was thought to have been made. Her fourth child Victor Ammeil was born in Lexington in 1868. 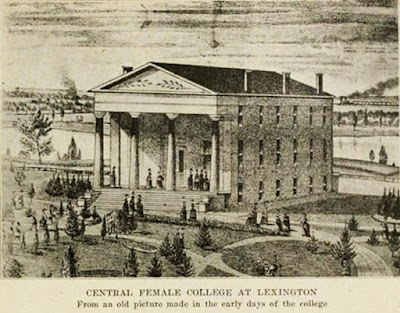 Reverend W. C. Godbey is recorded as living in Lexington and teaching at the Central Female College that was founded there in 1869. At some point he was chaplain of the State Penitentiary in Jefferson City.  In 1879 the family moved to Morrisville, Missouri, where William Godbey became
President of the Morrisville Institute, later Morrisville College, another Methodist-Episcopal Church, South, school. 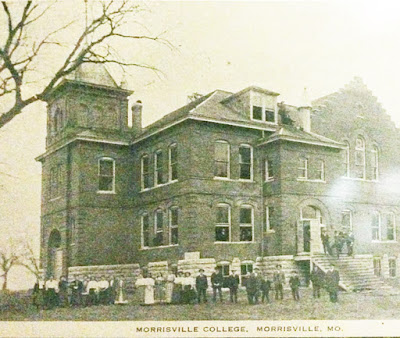 The quilt was donated with the story that it was sold at a Methodist-Episcopal Church bazaar in Lexington in 1866, although this date seems a little early for a silk log cabin. Similar quilts date to the 1880s when silk was relatively inexpensive. I was hoping to find more about the Lexington church bazaar in local newspapers but came up with nothing. It may be that the quilt was actually made in Morrisville at a later date.

I did, however, find out why Carrie Smith Godbey is not buried with her husband. She is buried in Morrisville and her Find-A-Grave file is quite complete, except for mention of his grave.

The answer seems to be that he disappeared in disgrace in 1886. 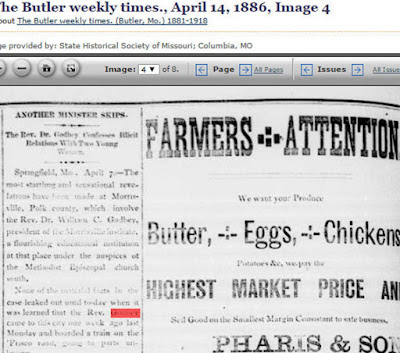 The Butler Missouri Weekly Times showed the family no mercy.

"Another Minister Skips
The Rev. Dr. Godbey Confesses Illicit Relations with Two Young Women
The most startling and sensational revelations have been made at Morrisville...

"None of the material facts in the case leaked out until today when it was learned that the Rev. Godbey came to this city one week ago last Monday and boarded a train on the Frisco road going to parts unknown. The cause of the sudden departure is alleged criminal intimacy with young lady students regarding which it is reported that he made a full confession to his wife just before he left."
The McFarland sisters did not board at the school but "kept their own house"..."As he was at the head of the school and old enough to have been the father of the young women, nothing was thought of this until rather recently, when Mrs. Godbey by some means got an inkling of her husband's infidelity, and he made a clean breast of the matter to her and then skipped out."

Read the "startling and sensational" story in the Butler Weekly Times here:
http://chroniclingamerica.loc.gov/lccn/sn89066489/1886-04-14/ed-1/seq-4/#date1=1789&index=5&rows=20&searchType=advanced&language=&sequence=0&words=Godbey&proxdistance=5&date2=1924&ortext=godbey&proxtext=&phrasetext=&andtext=&dateFilterType=yearRange&page=1

And here's a little more: 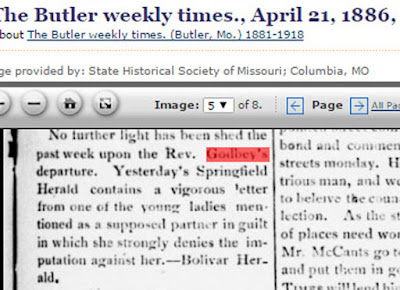 "The charges of immoral conduct and adultery were true....
expelled from the conference and the ministry....
his name dropped from the church record...."

So all we can say to Carrie is we are sorry for her troubles. She stayed on in Morrisville where the scandal occurred and we hope she got on with her life (as we advise today.)

As far as the quilt made from her butterfly dress, it was donated to the museum in memory of the Methodist ministers murdered during the Civil War.

What a nice quilt. Looks great condition as well. That pink fabric is very nice. before reading your blog, I [incorrectly] assumed they did not have pink fabrics in that era, lol. The "Feed The Hungry" across the front is a wonderful history of people's love and charity for others. There have always been good people in this world.

On my! What a life this woman lived! Thank you for sharing this quilt and story.

I went to college in Missouri but I'd never heard of Morrisville or the Morrisville Institute. Your reference led me down a rabbit-trail to a blog/website devoted to "America's lost colleges." Thanks!