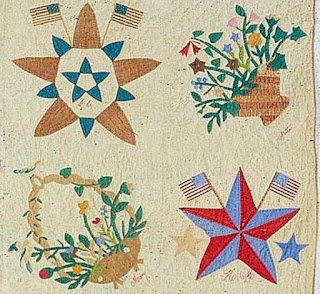 Susan's quilt is one of the samplers that provided inspiration for our 2017 Block of the Month Yankee Diary. It begins Wednesday, January 25.

Susan B used a white background with various blues, reds and greens. Note the flags of striped fabric. Hers is set in conventional squares but we are going to be doing an irregular set with various sized and shaped blocks. 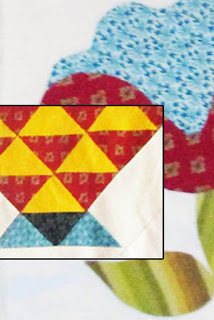 I am doing mine in traditional colors like Susan B, primarily red, white and blue with green and yellow accents---no browns. 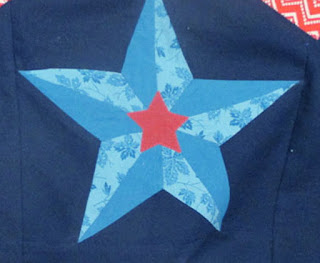 Denniele is doing hers in red, white and blue. Her background is a plain navy blue.  For the applique and piecing she's using some clear, bright reds and the blues are from Baltimore Blues 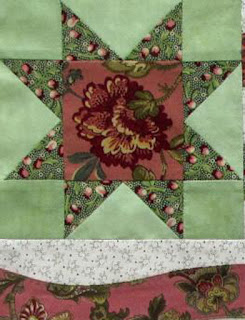 Becky's background is a small print, a slightly gray shirting print.
Her colors are red and green but in this block the red is pushed to pink and the green to a more pastel, clear green. 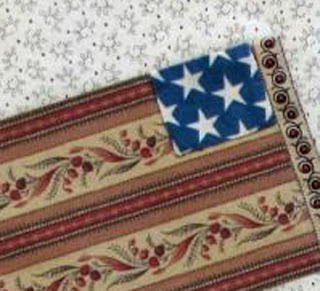 You'll be making some flags. I bought a fat quarter of a blue polka dot and a red zig-zag stripe. Denniele also used a zig-zag for her flags; Becky a traditional madder-style stripe. A fat quarter of each is enough but you may want a half yard so you can use the prints in other blocks too. 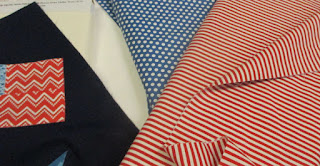 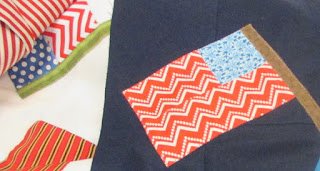 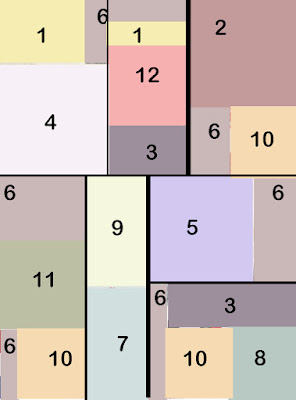 Here's the plan for the quilt finishing 42" x 54"
The numbers are the monthly pattern numbers.

For the applique and piecing in the blocks you will want an assortment of prints (or maybe plains). You'll need the flag fabric (see above).
Fat quarters:  Perhaps 8 would be enough for the monthly blocks and checkerboard filler strips. It's going to be very scrappy so you probably can raid your stash for most of it. 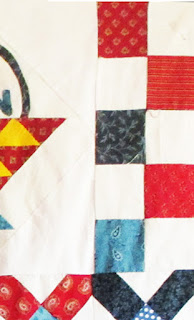 Block 6 in the diagram is a checkerboard filler.

Other Color ideas.
Below some samplers I found on the internet. 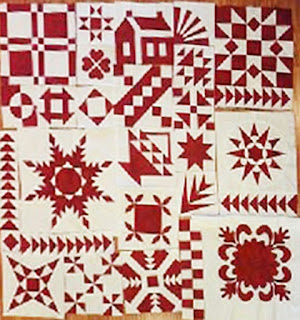 Red & white by whom? (see UPDATE below)
Here's a sampler of irregular sized blocks, which
is what we'll be doing. It looks great in red and white
and the two-color combination unifies different sizes and blocks.

Thanks to commenter Alwayssketpintap: "thought I'd share the designers of the red and white sampler shown above. They are the SentimentalStitches.net Gay Bomers and DearJane.com author, Brenda Papadakis. Their debut duet work was called Just Takes Two. 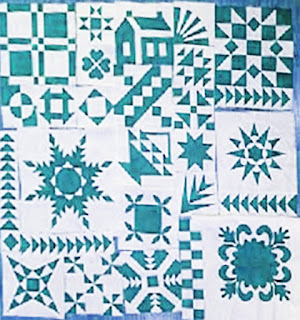 Same sampler in two fabrics - recolored in blue and white. 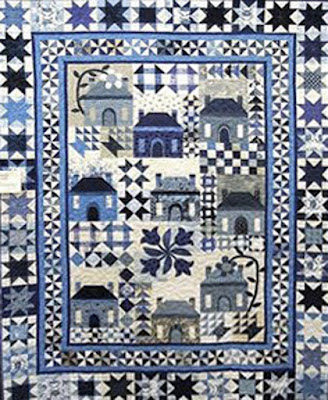 Shades of blue by whom?
Thanks to Chickadee who says:

The blue house quilt is called Indigo Manor by Louisa Otis. The pattern, called Meet Me at the Manor, was in Quiltmaker magazine. Isn't it beautiful? I've never made a monochromatic quilt but it is tempting. 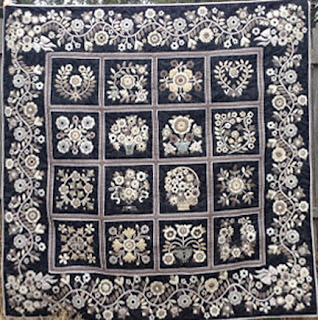 Almost black and white by Elisa 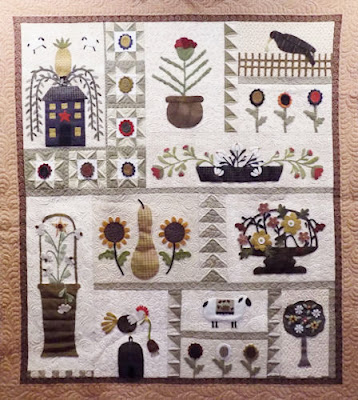 Farmhouse Spring Sampler.
Colors pushed almost to grays.
The kit is from The Cotton Patch---wools and cotton flannels. 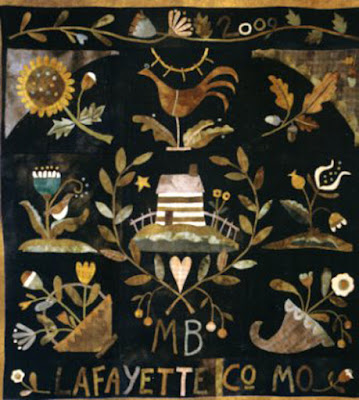 Settlers' Pride sampler by Maggie Bonanomi
Wool on black.
That Maggie look is a great look. 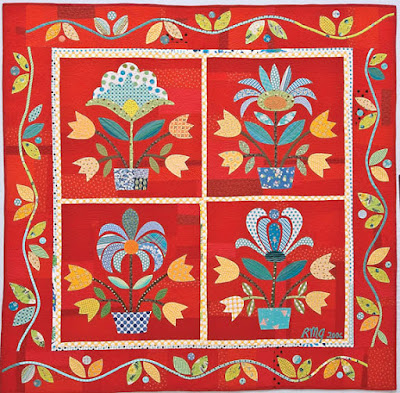 And then there's Becky Goldsmith's take on traditional color.

Thanks for showing so many different options. It helps in deciding which way to go with fabric choices.

Wow! Thanks for all the choices! I'm thinking to go with a softer color palette on my end. It will be fun to do some shopping!

Thanks for this excellent informative introduction! I'm looking forward to this series!

Thank you for what looks to be another wonderful year of stitching.

This looks so tempting again!

I hope someone will do that black & wool variant (not me!!!). I'm feeling like that could look great. :D

I have never done a block of the month. Are you saying that in January there will be a pattern for the first block? Is there a cost?

I like the last one with the red backgrounds. I had the whole line of that fabric at one time, I gave it away I always wish I hadn't. I think it was their first line of fabrics. What is a Yankee Quilter?

I thought I'd share the designers of the red and white sampler shown above. They are the SentimentalStitches.net Gay Bomers and DearJane.com author, Brenda Papadakis. Their debut duet work was called Just Takes Two.
I am looking forward to another fun and informative year with you. Barbara, Does this BoM have a name already?
Thanks for sharing so much with us all! Happy Holidays!
Cathy von Jess in MA

The blue house quilt is called Indigo Manor by Louisa Otis. The pattern, called Meet Me at the Manor, was in Quiltmaker magazine. Isn't it beautiful? I've never made a monochromatic quilt but it is tempting.

Do we need to sign up for this series? If so, where? I love the different styles and the fabrics that are hard for me to find. I go on a fabric hunt every day!

This will be another year to discovery America and his history for me! The only obstacle will be to find the fabrics here where I live, maybe I'll start with fabrics from my stash.
Thank you for this new adventure!
Rina, from Italy.

This looks interesting and fun. I love history about America and quilts. I have 16 fat eighths in Sunday's Best by Kim Deihl. would that be enough for the blocks and checkerboard?

Looks like another great year of learning!
I'm looking forward it!

I am tempted to begin this journey with all of you Civil War Quilters. I am an admirer and love the Civil War and folksy Kansas Troubles look but seem to always have so many other projects going.
How does this work? Does one start with the flag block for January?
I could use some enlightenment as I am new to Civil War quilting, {but am fascinated by underground railroad history}.
My stash, however is somewhat vast(!!) & mostly traditional so I'm'closely related' by taste.
How do I start this project?