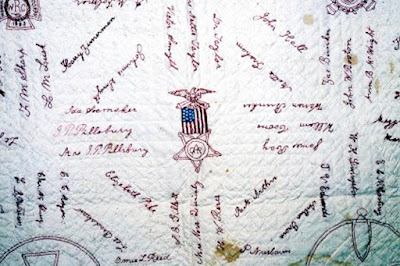 I showed a detail of this quilt a few months ago. It was recorded in 1988 by the Arizona Quilt Project at a quilt day in Yuma, It seems to have been brought to Arizona from Washington State. Photos and a short description are posted on the Quilt Index. 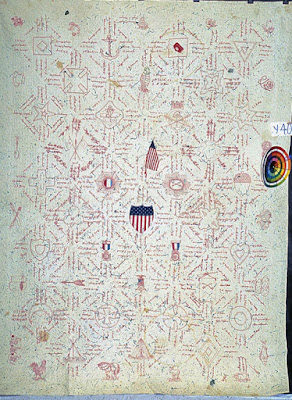 Suzanne reminds me to explain that the largest Union veterans group was the GAR (the Grand Army of the Republic). This quilt must have something to do with that organization. 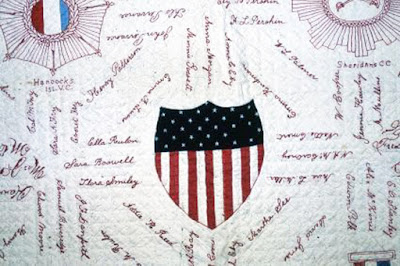 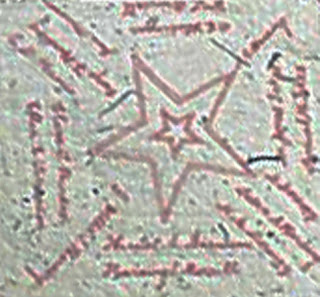 There are 32 blocks placed on point. Each has an insignia of some kind in the'center with names on the diagonal and on the square along the edges. 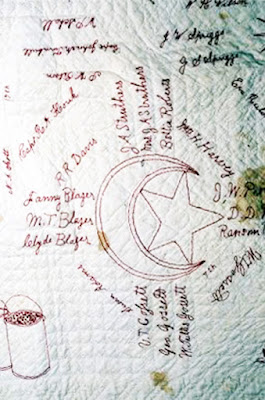 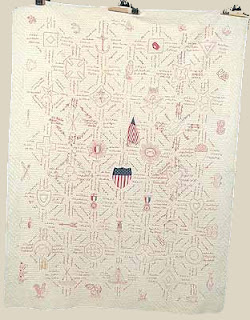 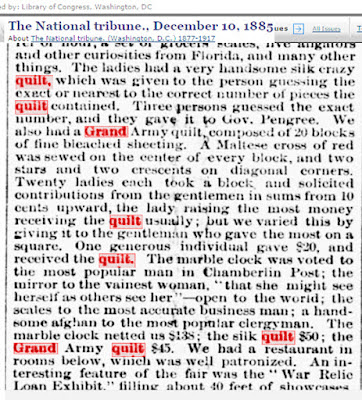 I did a search in the Library of Congress's newspaper site for "Grand Army Quilt" and came up with something quite similar to the Morgan quilt. The National Tribune, a veteran's newspaper, mentioned a GAR get-together in St. Johnsbury, Vermont, in 1885 where a "Grand Army quilt" was used as a fundraiser.

"We also had a Grand Army quilt, composed of 20 blocks of fine bleached sheeting. A Maltese cross of red was sewed on the center of every block, and two stars and two crescents on diagonal corners. Twenty ladies each took a block, and solicited contributions from the gentlemen in sums from 10 cents upward, the lady raising the most money receiving the quilt usually; but we varied this by giving it to the gentleman who gave the most on a square. One generous individual gave $20, and received the quilt."

I would guess that Anna Morgan was not the quilt's maker here, but the recipient or related to the recipient who won some kind of fundraising competition.

http://www.quiltindex.org/fulldisplay.php?kid=67-EC-884
Posted by Barbara Brackman at 6:00 AM

I assume "Grand Army Quilt" is for the Grand Army of the Republic, also known as the GAR. Is there a reason to rule out multiple makers? I think I'm seeing embroidered names by different hands, but can't see it as well as if seeing the real thing. Often these fundraisers were cooperative ventures. The 1880's are the time period in which the GAR was most active in its fight for more inclusive veterans pensions, Old Soldiers Homes, etc. I think their efforts in that regard were the usual reason for the fund raising quilts. Often the money for each signature was raised at one of the GAR's very large multi-state regional conventions called encampments at which booths were set up to sell items and solicit signatures. After the signatures were sold, a woman or, much more likely, several women had a major task in from of them to embroider all those names on the blocks. In addition to the methods mentioned in the quoted article for finding the quilt a permanent home, often these quilts became double fundraisers when the finished quilt was auctioned off also to benefit GAR. The families of one or more of the makers might have been very interested bidders.

If a list of names has not been compiled, that should be done. Genealogical research might tie a name to the donor family or reveal the GAR or Ladies GAR or Woman's Relief Corps chapter which would have been in the right location to collect the names. Then, although surviving records of these organizations are scarce, maybe some mention of it in the chapter records could be found.

I should have explained the Grand Army reference. Thanks for posting it.