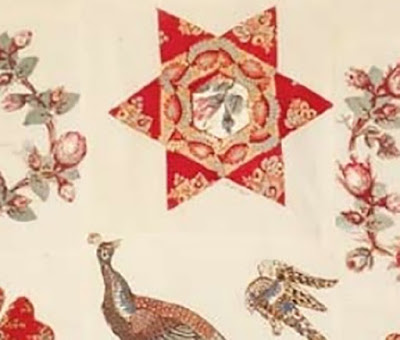 Star block with Miriam Moses Cohen's inked name in a quilt
made for Eleanor Solomons in Savannah, Georgia, in the early 1850s. 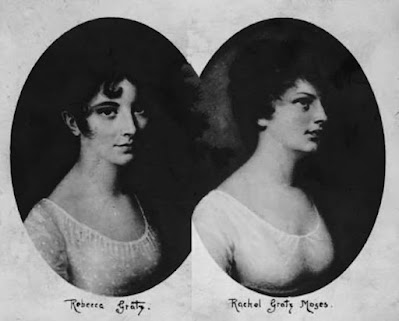 Temple University
Sisters Rebecca and Rachel Gratz
Miriam Gratz Moses (1808-1891) lost her mother Rachel Gratz Moses when she was about 15, but gained another in her aunt Rebecca Gratz. Rebecca and her Philadelphia brothers and sisters took on the pleasant task of raising Miriam and her siblings. Their closeness is shown in a letter Rebecca wrote to her sister-in-law in 1837 when Miriam left Philadelphia to live with new husband Solomon Cohen (1802-1875) in Georgetown, near Charleston, South Carolina. 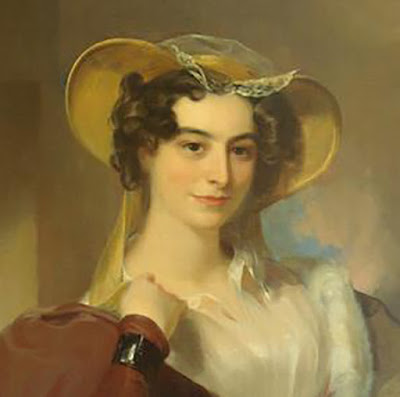 "It will be long ere the loss of My dear Miriam's society can be made up to me....to part with a daughter---one whose mind has been trained under your own eye and...has endeared to your heart....this parting has been a severe sorrow to me, and yet I rejoice in her happiness." 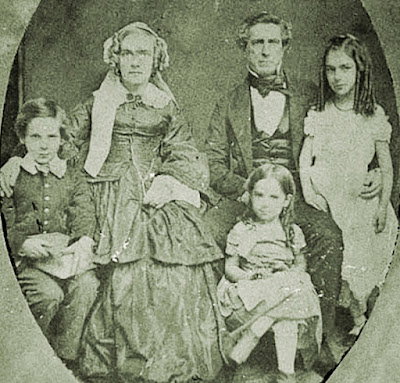 Georgia Archives, Vanishing Georgia Collection
Miriam and Solomon Cohen with son Gratz
and daughters Belle and Miriam, about the time
the quilt was made.
By then the Cohens had moved to Savannah. Solomon had family money and land; he was postmaster and city alderman and after the Civil War a US Representative from Georgia. Miriam volunteered at city charities such as the Needle Woman's Friend Society that enabled women to sew items to support themselves.
When the Civil War began in 1861 Miriam had two young girls and a 17-year old boy Gratz. Her Aunt Rebecca in Philadelphia was probably not pleased to hear Gratz's opinions about secession. He claimed it was the duty of every Southern state to leave the Union. His father was an enthusiastic supporter of slavery. How could one have an aristocracy without a servant class? 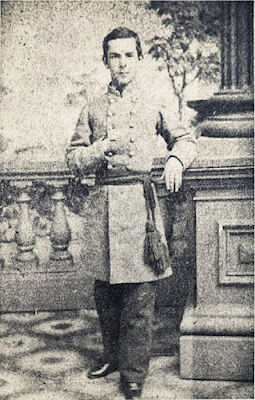 Gratz Cohen (1844-1865)
Gratz joined the Savannah Artillery and returned home a few times as "incapacitated" with chronic foot trouble and sickness. He enrolled in the University of Virginia, only to re-enlist, joining General P.G. Harrison's forces as they backed into North Carolina under General Joe Johnston.. On March 19, 1865, a few weeks before the South's surrender he was shot in the head at the Battle of Bentonville. 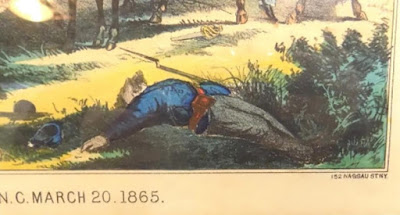 John Branum was killed in the same battle. See a post here:
https://civilwarquilts.blogspot.com/2022/02/a-quilt-stolen-and-rescued.html

Gothic memorial to Gratz
We know what the men in the family believed but nothing of northerner Miriam's private opinions during the war. Did she agree with her aunt who trained her mind or with her Southern-born men?
Letters between Confederate and Union states were rare once the war began. Rebecca was glad to report to her Kentucky sister-in-law:

"I had the rare treat of a letter from Miriam Cohen through a private opportunity to N.Y. which was forwarded to me---her family are well, and in her own sweet way she uttered kind thoughts that made my heart glad....She tells me there is not a young man at home in all their large connection---of course they have all gone to fight against us." 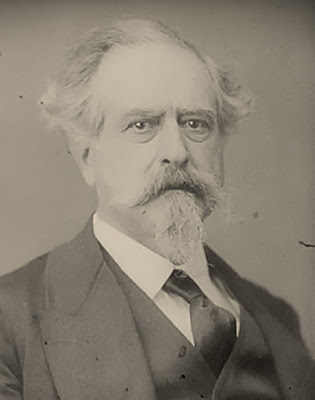 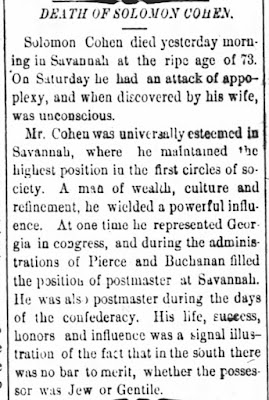 Miriam's husband Solomon died suddenly in August, 1875.
Five years later the census found Miriam at 71 "keeping house" with daughters Miriam, unmarried at 29, and Belle who'd married childhood friend Frank O'Driscoll. Frank died at 28 in 1875 leaving Belle with 3 daughters (They lost baby Aimee in her first year in 1869.) Their house full of women could support three servants, two women from Georgia and an Irish woman with the wonderful name of Mary Quilty (a not uncommon Irish name.) 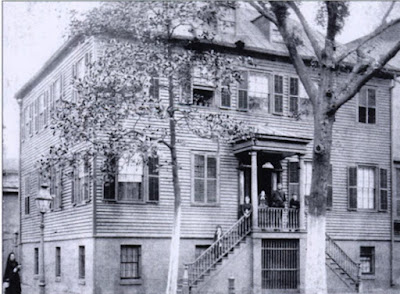 Daughter Miriam (Mamie) married James Dent that year and this home on Liberty Street
down the block from her mother's house is said to have been a wedding gift from her family.
Mamie's house still stands. Her mother's' is gone. 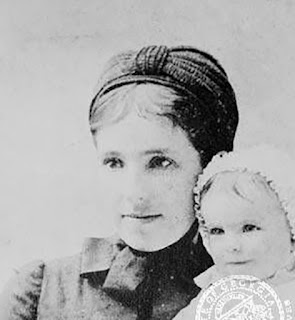 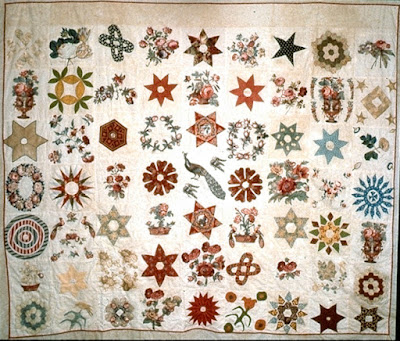 Blocks include names of relatives from South Carolina, Georgia and New York
The quilt with the older Miriam's name on a block descended in the family and is now owned by Judith Shanks who has done much work into its history. The gift to (Solomon Cohen's cousin?) Eleanor Solomons (1794-1856) upon her move from South Carolina to Savannah is typical of mid-19th-century Southern album or friendship quilts. Names are inked (not signatures) on the blocks---Judith believes inked by Eleanor herself who assembled the blocks. The wide range of sewing skills indicates different stitchers worked on the blocks. Perhaps Miriam pieced her own star. 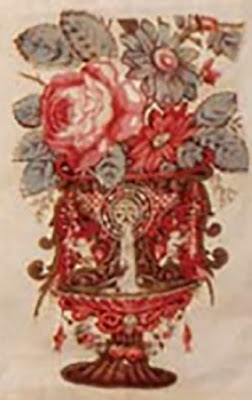 The combination of piecing, applique designs of calico and blocks with
images cut from chintz furnishing fabrics is typical of the times.
Two blocks are cut from this floral arrangement in a fountain. 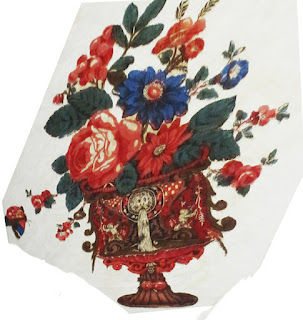 The Charleston Museum has a single block
cut from the same chintz. 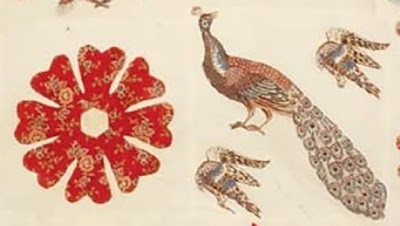 Peacock and a pair of birds in the center block with the initial "C."
were cut from a popular English chintz in the 1820-1850 period. 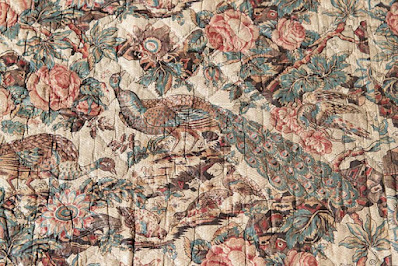 Peacock and Chicks in a wholecloth quilt
Read Judith Shanks's research on her family quilt:
https://www.judithwshanks.com/old_family_things/RIMbook_CH3_8MAR10b.pdf

More on Miriam's husband:
https://momentmag.com/solomon-cohen/
More about the quilt in a McKissick Museum catalog, A Portion of the People: Three Hundred Years of Southern Jewish Life:
https://books.google.com/books?id=ia3rXmIzhJcC&pg=PA108&lpg=PA108&dq=quilt+solomon+south+carolina+cohen&source=bl&ots=eqfftUniNv&sig=ACfU3U1Kqu2oU232bKMzQFGH8luQgVS95w&hl=en&sa=X&ved=2ahUKEwjqkYuIh_jzAhX6B50JHbE7CQ4Q6AF6BAgnEAM#v=onepage&q=quilt%20solomon%20south%20carolina%20cohen&f=false
Miriam's grave site:
https://www.findagrave.com/memorial/68683103/miriam-gratz-cohen
Posted by Barbara Brackman at 6:00 AM