A Quilt Stolen and Rescued 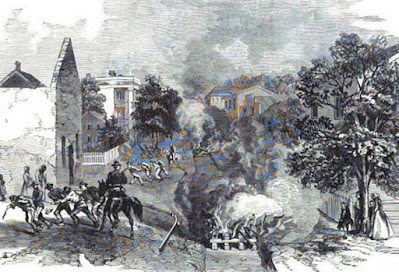 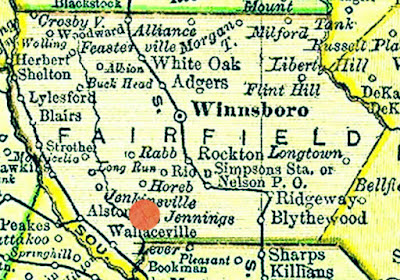 Branum mentioned they were in Matthew's Bluff on the Alston Road.
In preparation for moving north orders were issued to break up camp and throw away surplus items. Branum, about 23 years old, kept an account of his army experiences:

"I had a beautiful new patchwork quilt that I regretted to abandon....I went up to the home of Dr. Glenn, on whose plantation we were staying. I took the quilt with me, preferring some one should have it, rather than see it burned in camp."

He found a number of women in the large house, some of whom had been burned out by the Yankees.

"I told the lady I had brought a quilt that some of our colored boys had taken from a house, and having no use for it, would leave it with her rather than see it destroyed. She looked strangely...hesitated to take it."

But his manner must have given her confidence. She begged him to stay and protect them. "It would give me pleasure to do so but we were moving on and I could not stay." We assume Mrs Glenn kept the quilt. 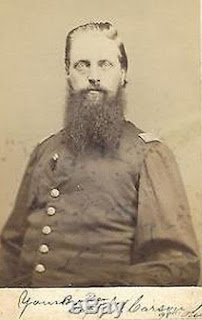 Captain John W. Carson
from his Find-a-Grave site
Branum did move on to fight at Bentonville, North Carolina, one of the war's last battles where Sherman's troops routed Confederate General Joseph Johnston's. His long-time friend Captain John W. Carson reported back to his parents in Bridgeport, Ohio on Branum's death from a minie ball.

“He was about three paces from me when he was struck, and though deadly as the shot was, he did not fall instantly. He turned to me and said, ‘I’m killed, Captain,’ then made one step towards me and fell into my arms, saying ‘Take care of my things and send them to Mother.’ I laid him down slowly to the ground.” 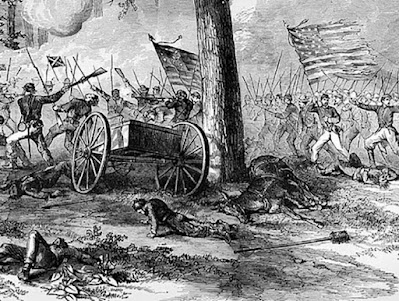 The Battle of Bentonville, 1865, Leslie's Illustrated
Branum was really not cut out to be a soldier. General William T. Sherman had no doubts about the "just punishment" his army was administering in the last days of the Confederacy but shortly before handing over the quilt John Branum questioned the Yankee' method of operation foraging and terrorizing civilians:
"Will we ever have to atone for our doings here? or are we right in doing these things?" Branum's letters were published in book form in 1897 (Letters of Lieut. J.M. Branum from the 98th Ohio Volunteer Infantry) but copies are hard to find. However, the G.A.R. newspaper, the National Tribune serialized them in 1900.
"Letters From the Field. Letters by the late J.M. Branum. 98th OVI."
The local G.A.R. post #271 in Ohio was named for him.