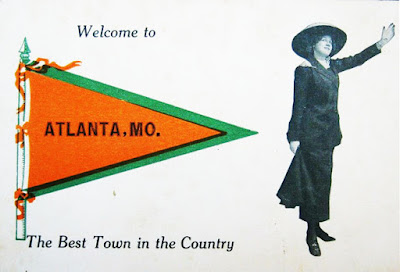 Well, you wish you could have seen this quilt at the Atlanta, Missouri fair in 1917.

It was a large silk quilt with a map of the Confederate states and 161 autographs of "prominent women of the Confederate states." Then there was a "monument to the memory of the heroes of the Battle of Wilson Creek." The Battle of Wilson's Creek was a Missouri battle early in the Civil War fought on August 10, 1861, an early Confederate Victory. The exhibitor was Dr. James Franklin Gross, who lived 9 miles west of Atlanta at the time. 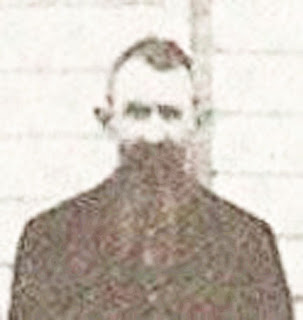 J.F. Gross fought at the battle when he was a 19-year-old after enlisting in the Missouri State Guard, Company B, 1st Regiment. He was mustered out after six months on December 3, 1861.The MSG was affiliated with the Confederate army in the strange loyalties of that first year of the war.

The 1917 article says he "conceived the idea of collecting the autographs in 1898." 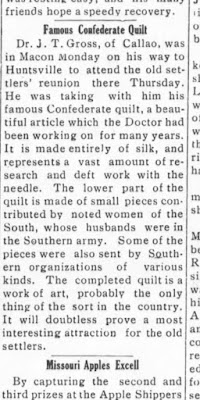 1915 article on the famous Confederate quilt

"It...represents a vast amount of research and deft work with the needle. The lower part of the quilt is made of small pieces contributed by noted women of the South, whose husbands were in the Southern Army."
While Dr. Gross may have done some of the research he did not do the deft work with the needle, despite the article telling us he'd "been working on [it] for many years" 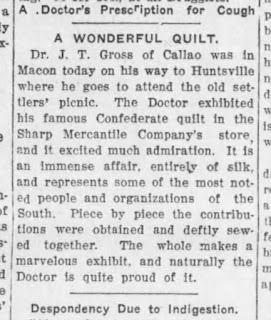 On the way to the Huntsville, Missouri Old Settlers' Picnic
Dr. Gross showed off the quilt in Sharp's Mercantile Company. 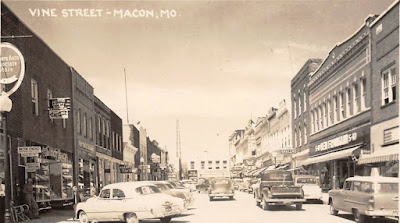 The local papers were enthusiastic over Dr. Gross's famous quilt, but
you know he didn't make it. 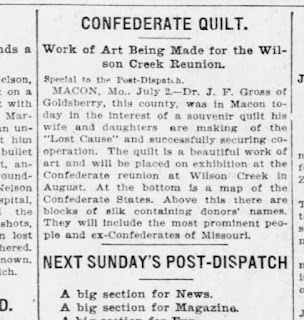 St. Louis Post-Dispatch
This article was copied in numerous papers, particularly
in Kansas where the news undoubtedly grated on a few nerves.

The earliest article mentioning the quilt gives credit where it's due.
In July, 1897 he may have been showing it off when he was in Macon "in the interest of a souvenir quilt his wife and daughters are making of the 'Lost Cause' and successfully securing operation (whatever that means?) They planned to exhibit it at a Confederate Reunion at Wilson's Creek in August. The piece seems to have been finished with the map in place and then "blocks of silk" containing donor's names. (Was this a fundraising project?)
The names will include "the most prominent people and ex-Confederates of Missouri." 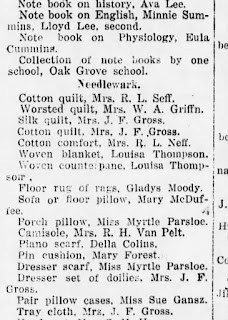 The anonymous wife and daughters probably did not want their names in the papers---it was all so unseemly.  However, we do see the Doctor's wife as a prize winner at local fairs with her needlework. At the 1917 Atlanta Fair Mrs. J.F. Gross displayed a silk quilt (this one?) and a cotton quilt, a pair of pillow cases and a tray cloth.

She was Clarissa Steadman Gross (1844- 1938) married to James in 1864. They had 8 children. The two daughters who may have worked on the quilt were probably Maryetta Magdalene Gross Wood (1870 – 1899) and Nora Percy Gross Thurman (1874-?). Maryetta had tuberculosis and died in Wyoming two years after the silk quilt was begun

Clarissa was born either in Wisconsin or Ohio. Trying to figure out anybody's loyalties in rural Missouri is difficult, but we must assume she was a Southern partisan---or at least deferred to her husband. 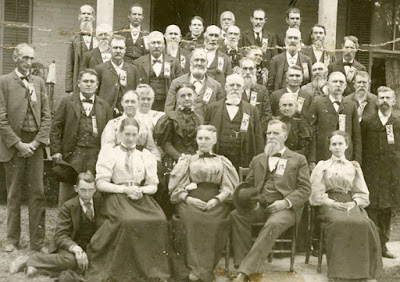 Survivors from the Confederate Missouri Infantry regiment who'd fought at
Wilson's Creek at the 1897 Reunion.
Photo from the Wilson's Creek Battlefield archive.

The 1897 reunion in Springfield was a Blue & Gray reunion welcoming old soldiers from both sides but apparently the Confederate veterans felt they were not given the respect they felt they deserved. 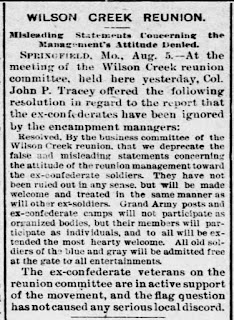 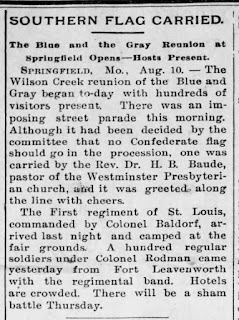 No Confederate flags were to be displayed in the parade.
The Gross quilt with it's Confederate map probably did not foster the spirit of reconciliation.
But it must have been a wonder.
I wonder if it survives.

Thank you for posting this story !
Clarissa and her husband J.T. Gross were my mother's paternal grandparents.
I was never sure where their political leanings were, which is now very apparent. I had only heard a story of carpetbaggers coming to their door and, that Dr. Gross told them that he needed to get his shoes. Apparently, he then fled out a back door.
It was interesting to find out that Clarissa was accomplished in quiltmaking and needlework. I know now who most likely made the few pieces I have.

Dear Unknown
Do send pictures of your inherited needlework. Clarissa deserves a lot more credit.
send an email if you have time to
materialcult@gmail.com