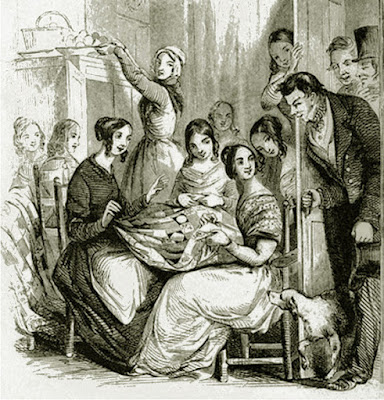 A Quilting Party of the '50s

When Joseph Fountain, a 44-year-old English immigrant, joined the Sixth New Hampshire Volunteers, December, 1861, his wife Mary Ann must have sent along a quilt to keep him warm. Sometime in the early years of the Civil War while in Virginia Joseph was ordered to march with a light pack:


"We have just received orders to through [throw] away all we can't carry on our backs, and you never see such a time there is, in nailing up boxes of all sizes to send home, and you will receive one from me in which I have sent my old quilt, for I did so hate to through [throw] it away and I want you to get up a quilting match and fix it up new again, I dont know what else I have put in it only I know there is quite a variety.

Joseph left Mary Ann with six children from 18 years old down to an infant back in New Hampshire. He survived the war although he was discharged with a disability in November, 1863. His letters were offered at a Cowan's Auction last November. 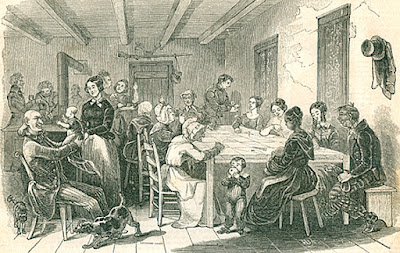 We learn two things from this snippet: He called a sewing get-together a "quilting match," perhaps an English rather than a New Hampshire term. Quilting party was the common American name at the time.

And the Army provided shipping services in the field. Boxes of homemade goods came into the camps, gifts for soldiers from family and friends, and boxes went out.

I've noticed before that several soldiers wrote their families they were shipping boxes home, usually in the context of plundered Southern goods.

The Army or the private shipping services like Adams Express sent all those quilts, silver and other souvenirs up north 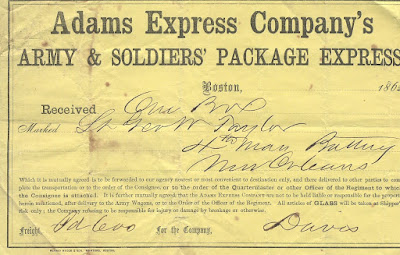 "Quilting match" made me laugh - I thought maybe it was his little joke about the sometimes competitive nature of quilt groups.

I agree that it was a nice service for the men that if they could not carry their goods then they could send it home. I had not realized the amount of plundering they did, but should not be surprised. It is sad that they do that.