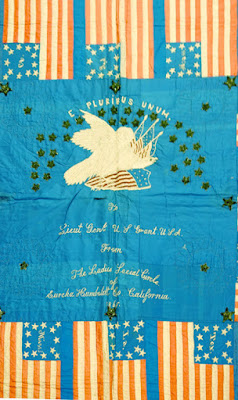 Banner Quilt made for General Ulysses S. Grant during the Civil War
by the Ladies' Social Circle of Eureka, California.
Collection of the Clarke Museum in Eureka.

Every couple of years the Clarke Historical Museum shows this fragile quilt. It's been on display this summer, coming down today, September 2, 2017. Humboldt County Quilts Over Time is showing over two dozen quilts from the Clarke Museum’s collection. 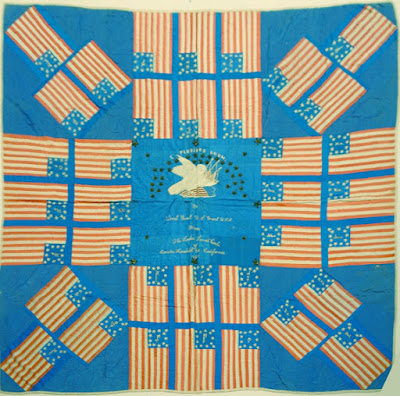 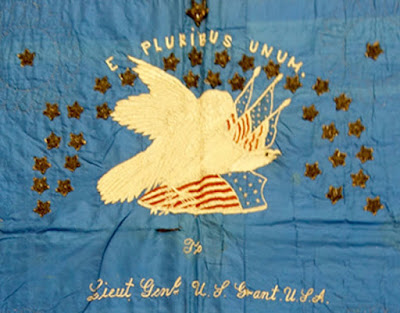 It's been well documented. Kaaren Beaver Buffington published an article in Uncoverings 2004: "A Quilt for General Grant: A Local Response to a National Need, Humboldt County, the U.S. Sanitary Commission and the Great Civil War."


"Before he became a Civil War hero and the 18th president of the United States, Ulysses S. Grant served as a young captain at Fort Humboldt in Eureka from 1853 to 1854. In 1865 [Probably 1864] , to honor the famous former resident, members of the Ladies Social Circle of Eureka made a patriotic-themed quilt, which they auctioned off to raise money for wounded veterans."
Hand-stitched of red, white and blue silk, the quilt displays an American flag for every state in the then-reunited union. A center medallion of gold thread shows an eagle and the quilt’s dedication to the Civil War victorious Gen. Ulysses S. Grant. After the funds were raised, the “Grant-Banner Quilt” was sent to Grant along with a letter, and this brought a thank-you note from Grant himself. In 1991, the Grant family returned the quilt to Humboldt County, entrusting it to the Clarke Historical Museum in Eureka." 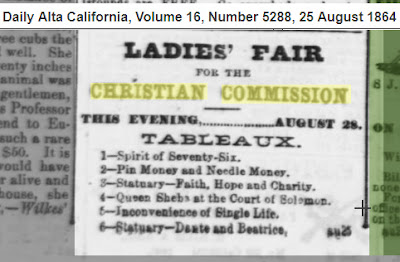 It seems that the quilt was exhibited at the San Francisco Christian Commission fair in August, 1864, and sent to Grant after the War was over. Grant thanked the ladies in July, 1866. 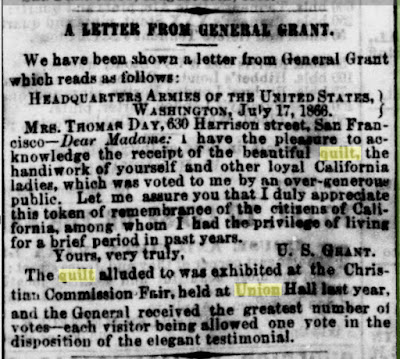 Mrs. Thomas Day, 630 Harrison Street, San Francisco---
Dear Madame: I have the pleasure to acknowledge the receipt of the beautiful quilt, the handiwork of yourself and other loyal California ladies, which was voted to me by an ever generous public. Let me assure you that I duly appreciate this token of remembrance of the citizens of California, among whom I had the privilege of living for a brief period in past years.
Yours, very truly, U.S. Grant
The quilt alluded to was exhibited at the Christian Commission Fair, held at Union Hall last year and the General received the greatest number of votes-each visitor being allowed one vote in the disposition of the elegant testimonial.


"Grant was stationed at Fort Humboldt from 1853 to 1854 and several members of the Eureka Ladies’ Sewing Circle decided to make a quilt in 1864 to honor the general (and future president) for his efforts. During the Civil War, local quilters got together, made the quilt, auctioned it off quite a few times,” Brown said. “Basically, they had a fundraiser. People gave the money but didn’t get the quilt and they kept doing that. Money raised was donated to the U.S. Sanitary Commission and U.S. Christian Commission."

The newspaper went on:

"According to museum signage, after the fundraising auctions wrapped up, the all-silk quilt was mailed to Grant and eventually passed on to his youngest son, Jessie Grant, then his son, Major Chapman Grant, and finally to Mabel Grant Hazard, Grant’s great-granddaughter. After Hazard’s death, her husband and children decided the quilt should be returned to Humboldt County, so they donated it to the Clarke Museum in 1991."