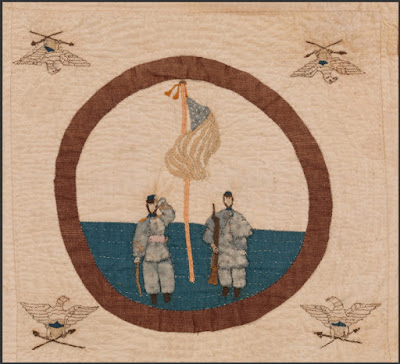 Block 11. Detail of a pictorial quilt attributed to
Emma Civey Stahl
about 1870.
Collection of the Metropolitan Museum of Art 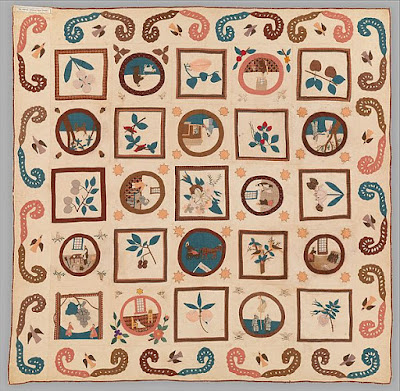 Emma Stahl's quilt is called the Women's Rights Quilt or Suffragette Quilt
because several of the vignettes picture a woman involved in the movement.

But the quilt also includes pictures of Civil War soldiers. On the left Block 5, a bearded soldier in light or faded Union blue is leaving a woman with a checked apron. On the right Block 6, he is returning. 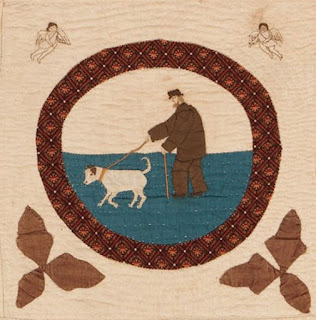 And perhaps this is also a
war-related image, Block 9, a bearded man with a cane
and some kind of assistance dog (or perhaps just a pet).

The use of  trained guide dogs for war-blinded veterans is not thought to have begun until the first World War. But this man with a cane and two angels above him may be evidence that informal use began earlier. Dogs are always eager for a job. 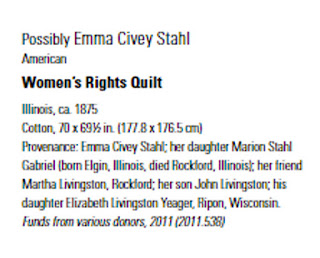 The museum has a good idea of the chain of ownership of this quilt so attributing it to Emma Civey Stahl seems accurate. I could find only a little about Emma C. Stahl: The record in Pleasant Valley, Iowa, of the birth of her second child Joseph Augustus Stahl in 1880. Her husband Jacob Shelden Stahl is listed as a laborer. He was born in Ohio, she in Missouri.

Her daughter Marion Stahl Gabriel was perhaps married to William A. Gabriel, chief watch designer at the Elgin Watch Company from 1888 to 1933. Marion apparently died August 24, 1965 at an Eastern Star home in Illinois on August 24, 1965. I first saw this quilt in the 1970s at a Chicago show, which makes sense chronologically. 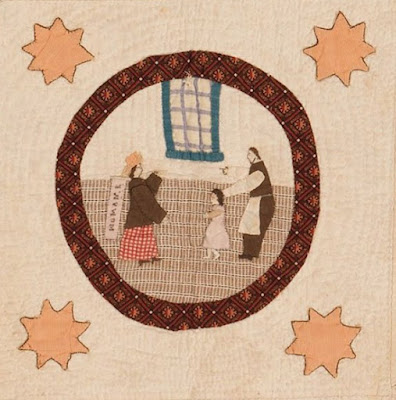 I was impressed enough to remember it to this day because it was such a knockout. At the time there was a sheet of typed paper posted next to it. I made notes on what it said. I see by her 1990 book Wrapped in Glory: Figurative Quilts & Bedcovers 1700-1900 Sandi Fox also saw that paper. She wrote:

"All too rarely does an explanatory note accompany a quilt ...at some point someone wrote...a series of comments on the figurative blocks (Footnote: Until several years ago, there was attached to each story block a tag with a number corresponding...)

4. She was told that war has been declared and she comes home and tells the husband he will have to go to war.
5. She gets him already to go to war and now he is telling her if God spares his life he will return
6. He does return and this is their meeting. This is all of the story. But in order to fill in the Quilt there is other pictures.
9. Angels are guarding the Blind man and his Dog. Notice how he is groping is way.
11. Is the Soldiers under the Flag of Freedom....There is not another quilt like this."

The notes add much to the quilt's interpretation. For one thing it is fascinating how the quilt centers on that woman. He doesn't go off to War, she tells him he will have to go to war. See Sandi's book for the rest of the notes. The book's so cheap used you should buy two.

You can view the individual blocks at the Met's website:
http://www.metmuseum.org/collections/search-the-collections/10024736?img=2
See also:

http://www.quakerquilthistory.com/2015/03/quaker-causes-and-womens-rights-quilt.html
Posted by Barbara Brackman at 6:00 AM

Great post! Thanks for the info on Sandi Fox's book. I just ordered it on Amazon.

Bettina writes: "I too was impressed by this quilt when Julie Powell was responsible for first bringing to light at the Land of Lincoln Symposium in 1982."

Just happened across your blog today when I was putting up a google alert for William Atkinson Gabriel, my first cousin twice removed. The quilts are beautiful!

You mentioned the possibility that William was married to Marion Stahl Gabriel. That is not so. William was married to Emma Louise Selbie in Bridgeport, Connecticut in 1883. He was indeed the chief designer for the Elgin Watch Company. I have a couple of his drawings for the early 1900's. Emma died in 1939 and William did not remarry. My part of the family lived in San Francisco but I have a photo of William with one of his daughters and my grandmother when they traveled to the Chicago area. I have collected quite a bit of historical information on William and the Elgin Watch Company. Perhaps I could do some searching on your Marian Stahl if you would like to give me a little more information on her. Thank you.
Lynnette Bates