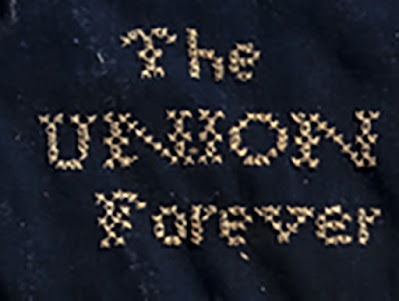 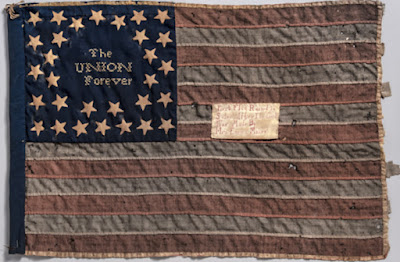 https://www.oldsalem.org/item/collections/american-flag/11600/
The label stitched to the flag reads:
"First Flag Raised In
Salem After the Civil
War Made By
Mrs. Emma Miller" 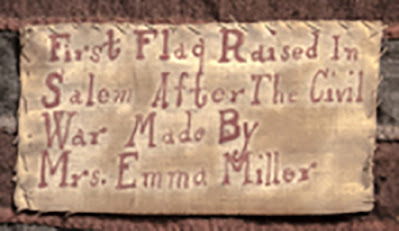 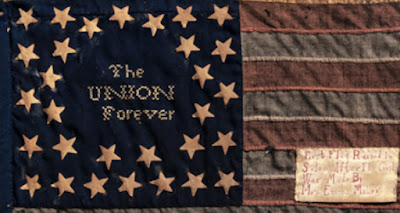 The fabrics may be both wool and cotton cloth with the blue
wool bleeding into once-white cotton stripes and the fugitive red stripes
bleeding into the stars and embroidery. 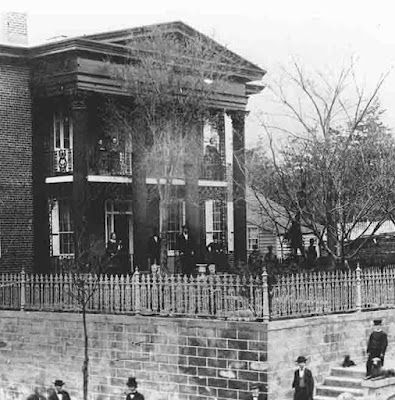 The Belo House in Salem about 1860
Salem is now part of Winston-Salem.
The flag---the first Union flag raised in Confederate Salem?--would have been "raised" in spring, 1865, after Salem surrendered to Union forces under General George Stoneman on April 10. Was the maker this particular Emma Miller, daughter of Elender Vanhoy & Harmon Miller? She's recorded in Salem's 1860 census, born in 1851, about 14 when the war ended. It seems unlikely. Her brothers, Confederate soldiers, died during the war. John W. Miller was killed at the Battle of Fredricksburg in 1862. Major Alexander Miller of the 21st North Carolina Infantry died in 1863 of wounds suffered at the Battle of Gettysburg. 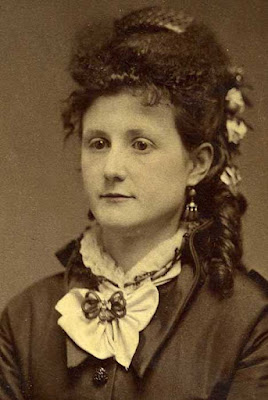 This may be the wrong Emma Miller---she became Mrs. Johnson, not Mrs. Miller. This Emma certainly knew how to accessorize---a fashion necessity in the 1870s.

The Emma Miller with Union sentiments may have been a student at the local Salem Female Academy, a well-respected boarding school since 1772 that continued to operate during the Civil War.

Teacher Emma Lehman remembered when Union troops under Colonel William J. Palmer occupied the town and the school (inhabited by "the very flower of Southern aristocracy.") She described the students' contempt for the Yankee soldiers so a Union-sympathizing flagmaker among them is a curious concept. 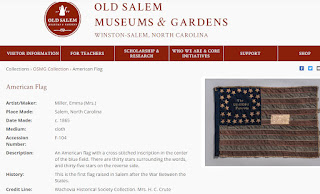 Tracking the flag's donor Mrs. H.C. Crute doesn't give us much information. She and her husband lived in Farmersville, Virginia, no hotbed of Union sentiment.

I love this flag!

It does give us something to ponder, though