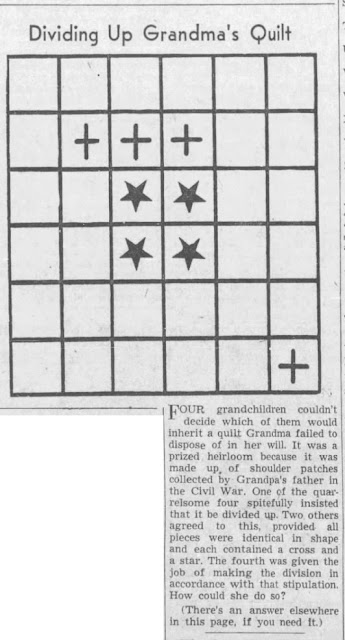 In 1949 the Vancouver B.C. Times published this spatial puzzle
that must have been syndicated from the U.S.
The quilt in question (rather asymmetrical) was "Made up of shoulder patches collected by Grandpa's father in the Civil War." 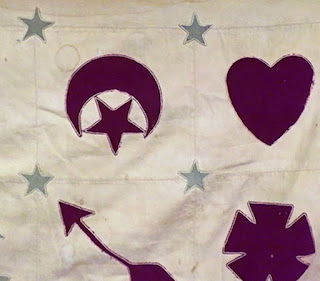 They must have been referring to something like this, the rather popular style of applique using the images of Union Army Corps Badges. 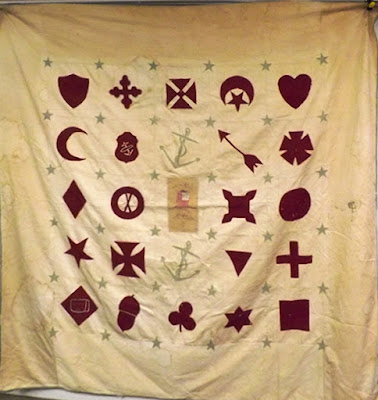 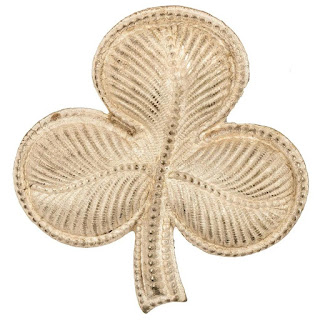 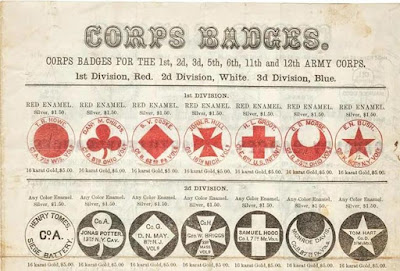 The Union Army adopted Corps Badges in 1863. Soldiers
often wore them on their hats.
It's an odd allusion. And here's the solution to the puzzle. 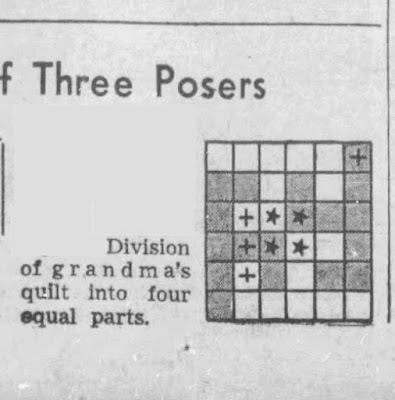 The whole puzzle is so obtuse I don't even
get the solution.
Posted by Barbara Brackman at 6:00 AM

The Mauch Chunk Times-News in Pennsylvania published a series of these puzzles (in the 1950s). The puzzles always cracked me up. Mauch Chunk is now Jim Thorpe, PA. Greetings from Allentown and enjoyed your recent post about quilt names from here! Have a great day!

I'm guessing the trick is equal parts didn't necessarily mean all the blocks had to stay together. In other words, so each child got the same number of blocks, I think I'd have left the one side in 2 3x3 block sections. Then on the other half, cut a star and a blank from one side and 2 blanks from the other and swapped those.

Oooooooo... just walked back in from getting the 2nd cup of coffee - All 4 sections are the same shape. If you take one of the parts and rotate it around the center, not only did each get a star and a cross, but the blocks are in the same arrangement.

Resulting in odd little strips of quilts? No thanks!

All four are in the shape of a letter "J" as well as having two crosses in each. Not sure I'd want to have one of those quilted shapes though. As a maths teacher, I would often find puzzles of this type to solve. The answers are never straight forward either!