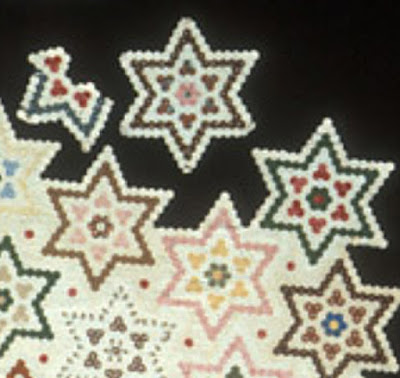 Lucy Walton Barrett was about 15 years old when the Civil War began. She started this hexagon project during her teenage years, according to an interview with her granddaughter Lucy Curtis in 1999. Her family might have hoped whip-stitching tiny hexagons together would keep her and her sister out of trouble but Lucy's granddaughter remembered:

"Lucy was quite a spitfire. According to family stories the night the Yankees came they went into the parlor and found a vase on the mantle piece, with a little confederate flag in it. The soldier claimed the flag was a war trophy. Lucy said, 'Here's the flag and waved it over his head, which infuriated him (he was probably three sheets to the wind).... He tried to shoot her but was hustled out by other soldiers... Lucy was then sent to a Seminary in South Carolina for her own protection."

Family stories about the Civil War, especially Southern family stories, tend to dramatize the record and in this family the tales of Yankees at the Barrett farm (located where the Jackson Zoological Park is now) were passed down in many branches. The grandmothers must have been entertaining reconteurs (if not tooooo accurate.) Grant's army occupied Jackson, Mississippi in the spring of 1863 and the Barretts and the Wrights, relatives and neighbors on the Clinton-Jackson Road were in the middle of the battles for every acre of ground around Jackson. The first fight took place in May, 1863 and the Battle of Barrett's Farm was fought in July when Confederates attacked occupying Union troops.

The neighboring household was headed by Sarah Cornelia Walton Barrett (1819-1901). Her husband, Lucy's father (another Oliver) had died in 1858. Lucy had two sisters, Catherine (12-years older who supposedly had a hand in the quilt) and Sarah Cornelia, two years younger. 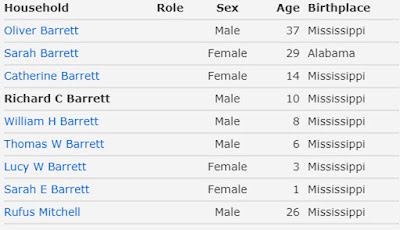 1850 census. Rufus Mitchell may have been a resident teacher.

Sarah C has gone down in family lore as just as spunky as Lucy. The story:

"Sarah Cornelia Barrett was my great-grandmother, and my grandmother (her daughter) never stopped telling this story."


During the military occupation, Sarah about 14,

"thought it would be a good idea to take a pitcher of water to the Confederate soldiers outside. About that time the battle started. She got yelled at by a young [Confederate] officer who told her to get back into the house. She yelled back and told him to mind his own business; she had a right to do what she wanted on her own property. They made an impression on each other. After the war, they got married."

In 1869 Sarah married Buxton Townes Ligon [1839-1894,] a Mississippian born in China Grove in Pike County.* Perhaps someone else can find a record of him as a Confederate soldier serving near Jackson in 1863, but I haven't been able to.

UPDATE: Within 24 hours two readers found record of Buxton Ligon on the Barrett farm in 1863. In the comments Jill wrote:


"I checked my subscription genealogy site and found that Mrs. Cornelia Barrett Ligon received a pension from the state of Texas in 1912 until her death in 1932 from her husband's Confederate service. Buxton Towns Ligon enlisted in the Confederate Army, Co A, 1st Mississippi Light Artillery on 13 May 1862 until their surrender at Jackson Mississippi. The Company was discharged by "parole at the close of hostilities" at Jackson MS. 12 Feb 1865. By the time of parole, Buxton Ligon was a Sergeant in his Company.
I checked Westar Wright also. It appears he and Buxton served together in Co A, 1st MS Lt Arty."

And Virginia found a book online:

From Jackson to Vicksburg 1861-1865 Memories of the War Between the States. Personal experiences on the Barrett Plantation Hinds County, Mississippi by Cornelia Barrett Ligon as told to her daughter, Kate Ligon McGarvey


"Of course, I was not acquainted with the soldier who fired the cannon that day, but subsequently I met him, Buxton Townes Ligon, and he slept on the front porch that night, along with my brother, and their horses were hitched close by, ready for use. He and brother Thomas were members of the First Mississippi Light Artillery. After the war, Buxton and I were married. We lived right there on that same plantation where we were married and raised a family of eight children." 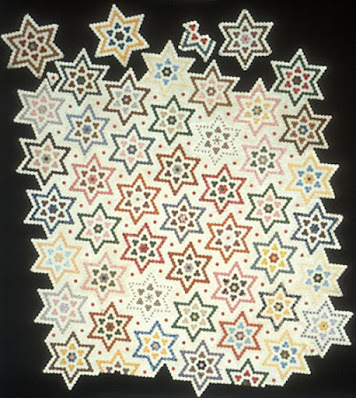 I wonder if Sarah Cornelia didn't co-opt her older sister's story. Weeks after the war was over Lucy married Wistar Nichols Wright, of Laurens, South Carolina, She was almost 20; he about 30, probably related to the Wright side of the family with relatives in Laurens. Wistar or Wister seems a very Philadelphia kind of name but I found no ancestors from that famous family. Friends called him Wis.

Apparently both sisters married soldiers they met in that July, 1863 battle near Jacksonville.

Wistar Wright did find himself at the Barrett/Wright farms in 1863 as a member of the 1st Mississippi Light Artillery, W. T. Ratliff's Battery, which suffered five casualties there in July after the fall of Vicksburg. Wistar survived, perhaps mustered out in July due to a neck wound he'd suffered in May. 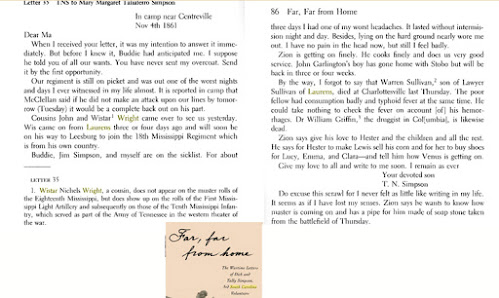 Wis Wright is mentioned in his cousin's letter in November, 1861 when he and brother Archibald came upon their cousin Taliaferro Simpson. Archibald fell ill and died in camp in 1862.

Wistar came back to Jacksonville and married Lucy Barrett on May 2, 1865. The 1870 census shows them living as farmers in the neighborhood and interestingly enough Lucy is listed as the land and property owner. New son Archibald was named for his uncle.

The 1880 census found them in Laurens County, South Carolina where they were farming; twenty years later they were still in Laurens. Wistar was a "pattern maker" and eldest son Thomas worked in a cotton mill. 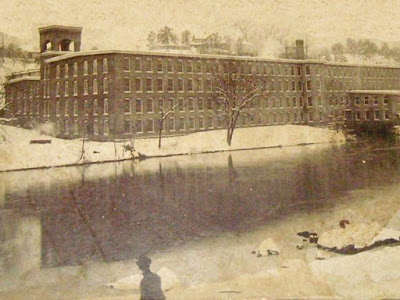 In 1903 Wistar and family were living in Pacolet, Spartanburg County. He probably worked at the Pacolet Mills when he accidentally stabbed himself in the thigh with a metal awl, dying of blood poisoning soon after at 67 leaving Lucy with four grown sons and two daughters.

She lived until 1936, undoubtedly entertaining her granddaughters with romantic tales. The women told another story about their mother Sarah Cornelia, just as spunky as her daughters, during the Battles of Wright's and Barrett's Farm. She'd supervised preparation of a supper for weary Southern soldiers but when Union troops forced the Confederate defenders back to Jackson, three high ranking Union Generals:

"walked right in..sat down uninvited and prepared to eat. This infuriated [Mother] since this was her house, she had not invited them in, and she had not prepared food for enemy officers to eat. There was little she could do since she was alone in the house except for her daughters and other female relatives. However, she refused to be cowed....strode into the dining room and glared.... Although she did not know it at the time, she was confronting three famous Union generals in one room at the same time - Grant, Sherman, and MacPherson. According to family lore, she was known to be steely-eyed, cold, and scary when really angry, and she was definitely angry.... She stared at the Union officers in silence until she got their attention and then said [famous quote in our family] - 'Go ahead and eat all you want.......but don't say I didn't warn you.' She then gave them a hard, malicious smile." 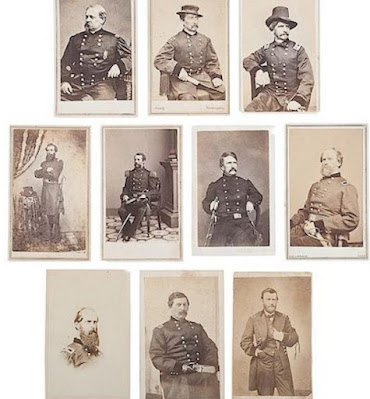 All three Generals left in a hurry---too intimidated to eat the meal or molest the household further.

That's a fascinating story, telling us how feisty the Barrett women were and how easily one could frighten a Union General. When talking about a culture where the spoken story is reverently repeated it's probably a faux pas to say these three Generals were NEVER in the same room in Jacksonville, Mississippi in July, 1863, so we'll let that one stand too. 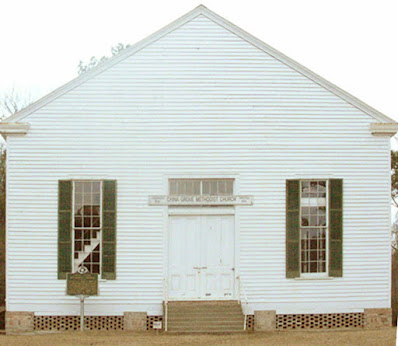 Church at China Grove,
as perfect as Welty's short story

*China Grove, Mississippi was made famous by Eudora Welty in her story "Why I Live at the P.O." where StellaRondo has returned to town with a mysterious child.

Read Cornelia Barrett Ligon's memoir here as a PDF:
https://electricscotland.com/webclans/minibios/c/FAMILY_BOOK_VolII.pdf
Her chapter begins on page 74. It's quite a story---she mentions General Grant and the tale about her mother threatening a poisoned dinner, but not in the same incident. There are some very fanciful stories: e.g. one morning they woke up to see the word Memphis in the fire ashes and sure enough Memphis fell to the Union that day.

Hi Barbara,
I checked my subscription genealogy site and found that Mrs. Cornelia Barrett Ligon received a pension from the state of Texas in 1912 until her death in 1932 from her husbands Confederate service.
Buxto Towns Ligon enlisted in the Confederate Army, Co A, 1st Mississippi Light Artillery on 13 May 1862 until their surrender at Jackson Mississippi. The Company was discharged by "parole at the close of hostilities" at Jackson MS. 12 Feb 1865. By the time of parole, Buxto Ligon was a Sergeant in his Company.
I checked Westar Wright also. It appears he and Buxton served together in Co A, 1st MS Lt Arty.
You always find the BEST stories!