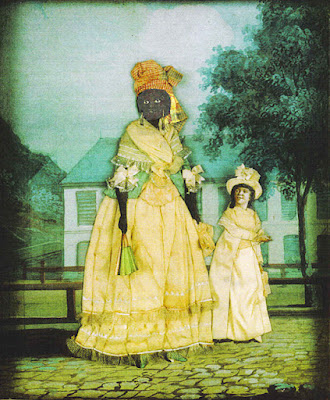 Found this in the picture files with the caption: "Free Woman of Color & Her Daughter, Collage, New Orleans." It's a collage but a type of collage known as a Dressed Picture. The Louisiannes here have paper faces but their clothing is actual cloth, pleated, trim, ruched and fussed with just like a real wardrobe.

The piece is from a folk art dealer in New Orleans, Andrew Hopkins.
http://andrewhopkinsart.blogspot.com/2011/02/julien-hudson-new-orleans-antebellum.html 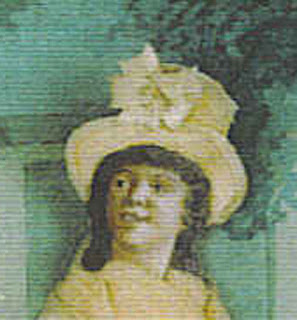 He thinks it's late-18th century and it could well be that old as Dressed Pictures were popular in England and American in that era (and probably elsewhere in the Western world.) I know nothing about Creole fashion in New Orleans so cannot date it from the clothing. 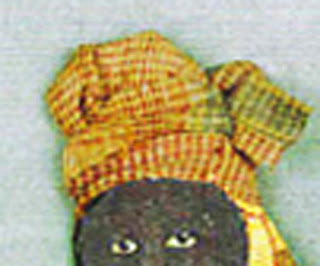 The woman's face may be painted on paper.
Her kerchief is perfectly arranged.

She looks just like a woman described by author Kate Conyngham, a Northern visitor to The Sunny South, who published a book about her trip in 1860, describing an impressive Creole woman seen on a train in Louisiana, wearing


"an orange and scarlet plaid handkerchief about [her head] Turkish turban fashion, a style that prevails here among the Creole servants. She had in her ears a pair of gold ear-rings, as large as a half-dollar, plain and massive, she wore a necklace of gold beads, hanging from which was a carnelian cross, the most beautiful thing I ever saw, upon her neck was a richly worked black lace scarf, her dress was plain coloured silk, made in the costliest manner... In one hand she held a handsome parasol, and the other fondled a snow-white French poodle upon her lap. said poodle having the tips of its ears tied with knots of pink ribbon and a collar of pink silk."

The author thought of the well-dressed passenger as a servant, but it seems obvious from her appearance that she had servants of her own. I quoted The Sunny South in my book Facts & Fabrications: Unraveling the History of Quilts & Slavery.

Nothing in the Sunny South was what it seems, and I was surprised to find that The Sunny South; or, the Southerner at Home was actually written by a man named the Joseph Holt Ingraham using Kate Conyngham as a pen name. 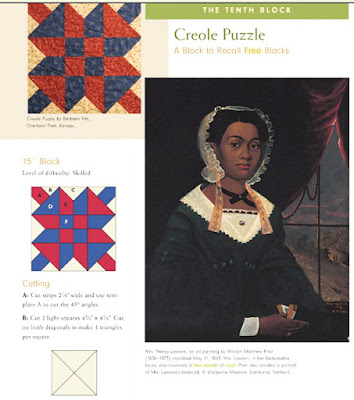 See quilts with dressed pictures in a post here:
https://barbarabrackman.blogspot.com/2020/03/leila-utters-dressed-pictures.html