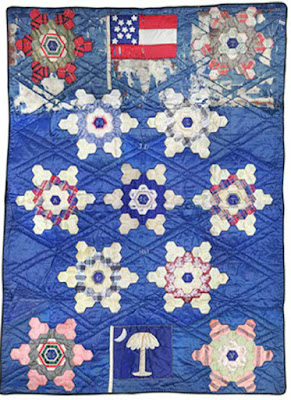 The cliche is that every quilt has a story. This crib quilt tells a tale that isn't pretty. 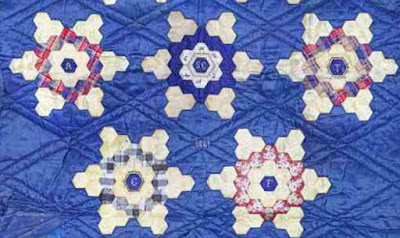 The silk quilt features the new Confederate flag at the top and South Carolina's palmetto flag at the bottom. Eleven hexagon stars each have a letter or two embroidered in the center, standing for the 11 states of the Confederacy symbolized on the flag. 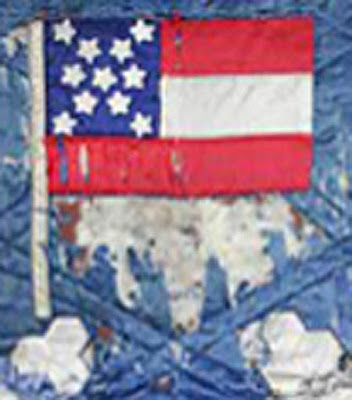 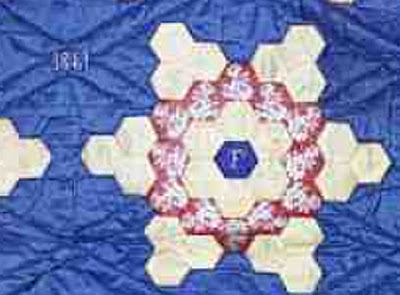 F for Florida
Tennessee was the last state to secede in June, 1861, so Maria Preston Harper may have finished it after that date in the summer of 1861.

The little Secessionist commemorative, stitched to indoctrinate a baby in Southern principles, was donated to the Museum of the Confederacy, now the American Museum of the Civil War, by Catherine Dickson who told the museum that Maria Preston Harper made it to warm James Augustus Dickson. Born in 1861, he was the first son of Henry Dickson and Catherine McPheeters Dickson and perhaps Maria's grand nephew. 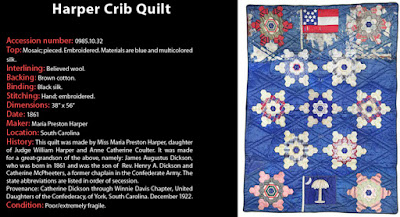 James Augustus Dickson was born May 26, 1861 in the midst of the secession crisis.

Maria probably made the quilt celebrating the brave new world of the Confederacy in either Lancaster or Fairfield County, South Carolina where her family seems to have had homes. She never married so left no descendants to keep track of her but here she is in the 1860 census living with her mother and widowed sister, McPheeter nieces and nephews and other assorted people in the Fairfield District of South Carolina. Her name is spelled Mariah and she is 37, born about 1823.

Maria had sisters Nettie and Ann Harper McPheeters and brother Wesley. She was undoubtedly a comfortable member of the aristocratic class of the Carolinas. Her mother seems to be worth $110,440.


Jesse Davis, a freed slave living in Winnsboro, South Carolina, was interviewed in the W.P.A. Slave Narrative project in the 1930s. He remembered his own master as rich but "not big rich like the Davises, the Means, and the Harpers." Jesse was about 20 during the Civil War so would have a reliable memory of the hierarchy among local plantation owners. 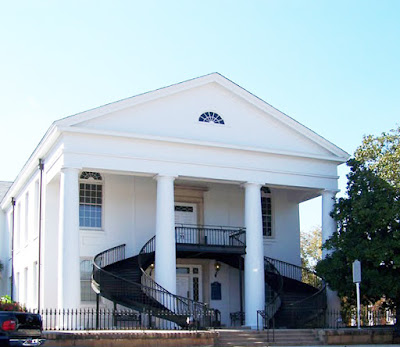 Yorkville's Court House (now York) designed by
the prolific architect Robert Mills who did much
to create classical Southern style.

Maria's father William Joseph Harper (1790-1847) had died over a decade earlier. Her mother Anne Catherine Coalter Harper died soon after the baby Dickson was born, as her tombstone tells us---on the "dawn of the 45th anniversary of her wedding day." Anne and William are both buried in a small cemetery at Salem Crossroads. 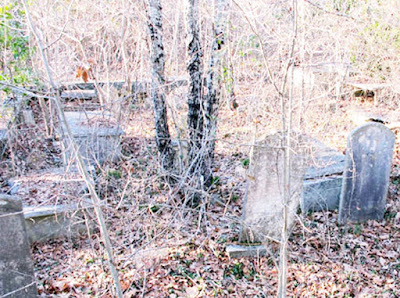 Maria may well be buried in the Salem Crossroads Cemetery
but no one has transcribed a stone for her.

And that would be all we know about Maria Harper with all discussion of her motives pure speculation if not for the fact that her father was quite an important politician, a U.S. Senator, a Carolina Senator and a Judge. William Harper was born on the Caribbean island of Antigua to Irish Methodist missionary John Harper and Antigua native Henrietta Hawes Harper. John Harper was reported to be an abolitionist and certainly a strong Methodist (another son was named John Wesley Harper.) 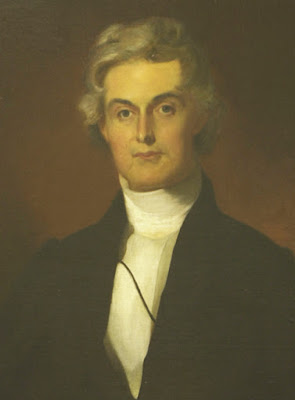 When William was about three the Harpers moved to Boston for his mother's health (she died soon after.) Reverend Harper's politics may have been welcome there, but five years later he took the family to Charleston and then to Columbia, South Carolina where he founded the Washington Street
Methodist Church.

Son William became a Carolinian, well known for his radical politics, described as second only to Senator John Calhoun as advocate for South Carolina's perceived rights from the nullification crisis of the 1830s to his death in 1847. 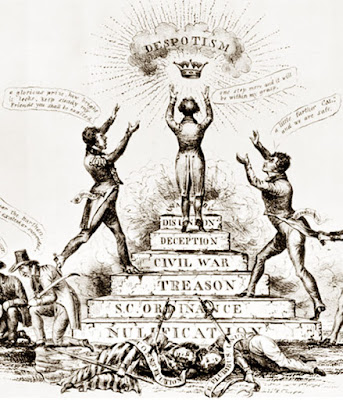 Anti-Calhoun cartoon from 1832. Is Harper depicted on the right?

Despite his father's abolition ideas William Harper was a chief apologist for slavery. In his arguments slavery, rather than being a necessary evil, was a positive good creating civilizing benefits and preventing evils such as degeneracy, barbarism and political radicalism. 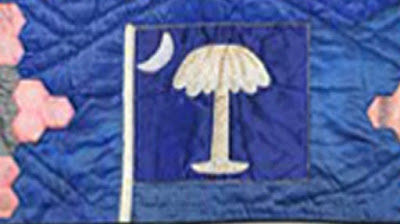 Understanding Maria Harper's fathers' politics gives us a glimpse as to how she came to make the silk quilt for her young relative. Trying to grasp her motivations at a deeper level in the context of her peer group is more difficult. Understanding her generation's virulent advocacy of secession and the Confederacy and their seemingly inherent hatred of the North presents deeper problems. 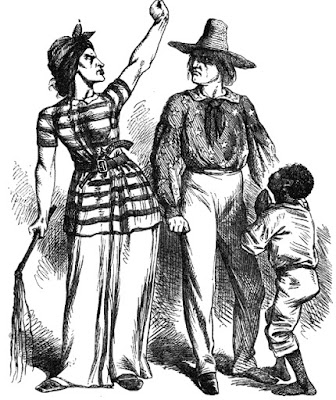 Southern Woman demanding a divorce from the North over
the rights to "larrup" her slave. From the English magazine Punch

Reading about South Carolina's women in biographies, diaries, letters and essays explains some of the antipathy. Out of that reading grew the stories behind our Block of the Month quilt patterns for 2020. I found the hostility, particularly in South Carolina, was endemic, reinforced by politicians, ministers, newspapers, teachers and family.

Louisa Cheves McCord, whom we will revisit in the applique quilt Cassandra's Circle, was spokeswoman for the Southern female. Never one to avoid a dramatic turn of phrase, she characterized the antebellum Union of North and South as wretched twins, "linked in incongenial brotherhood" using the analogy of Cheng & Eng Bunker, the famous Siamese conjoined twins. 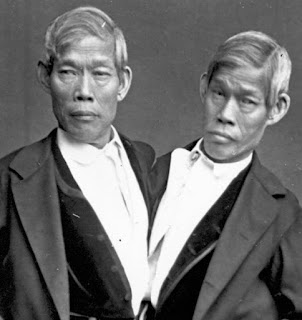 The South was unhappy victim of Northern legislation favoring an industrial economy. "Blind as they seem to the fact, our Northern States prosper by us and through us," was the way McCord saw it. The agricultural South's resentment of the industrial North will be explored in the pieced BOM, Yankee Notions. 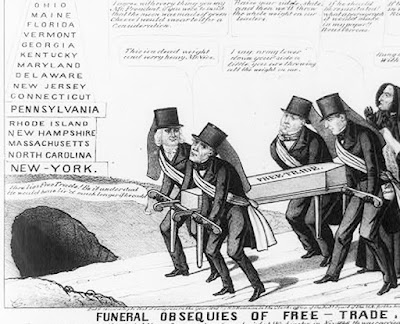 John C. Calhoun and his compatriots believed a state could
nullify any law the federal government made, particularly
any trade laws that benefited Yankee industry and taxed
Southern consumers---hence the Nullification Crisis.
(It's unconstitutional.) 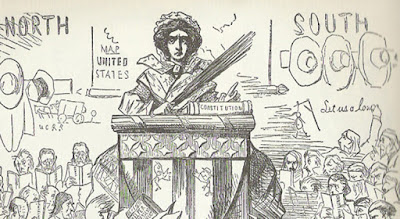 Miss Columbia with her Constitution and a switch,
trying to keep order among unruly boys.

Look for both patterns to start in January, 2020.

Amazing there is so much we know about that crib quilt! It is an important textile!!

I have several Barbara Brackman books and have followed the "Civil War Quilts" blog for the past year. I have found them to be generally balanced and without political rancor. However, I will cancel after this post.

I realize it is quite fashionable to bash the South, but I do not have to support it. While slavery has always been an evil institution, that does not give anyone license to disparage my ancestors. I am a proud Southerner and make no apologies for being from the South.

The ridicule and contempt about this Southern quilt and quilters was biting in this post. Listed below are just a few excerpts that I find offensive. If you read the entire blog, you will see the overall theme.

"The cliche is that every quilt has a story. This crib quilt tells a tale that isn't pretty." (I thought since this was a crib quilt, that some of her children had died. No, no deaths were mentioned in the blog).

"The little Secessionist commemorative, stitched to indoctrinate a baby in Southern principles." (Condecension, much? Have you ever said anything remotely like this about a Northern quilt?)

Have you ever seen a blog article on Northern quilts that "spoke" with such open disdain?

Dear Anonymous. Sorry you do not want to hear what I have to say. I have read extensively and I stand by all my statements. Do you not think an abolitionist poem or a temperance image on a child's quilt is "indoctrination in Northern principles?"

I totally agree with you Barbara. Especially regarding the childrens quilts, where such views should have no place - keep them sweet for sweet little ones.

What happened in the past unfortunately cannot be undone, but it doesn't mean that we should condone the worst of it, but endeavour to ensure that it never happens again in our civilized society and that all people whatever religion or race are treated with respect as fellow human beings.