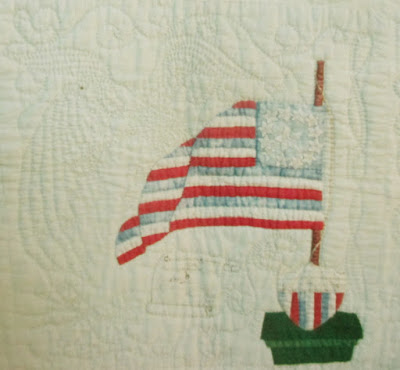 Twenty-two years ago Linda Critchfield sent me snapshots of a quilt from her collection. We had hopes of including it in my book Quilts From the Civil War, but it did not happen. I'm sorting through my paper files, digitizing pictures and information as I organize the files to ship to the Quilt Research Center at the University of Nebraska Libraries in Lincoln. 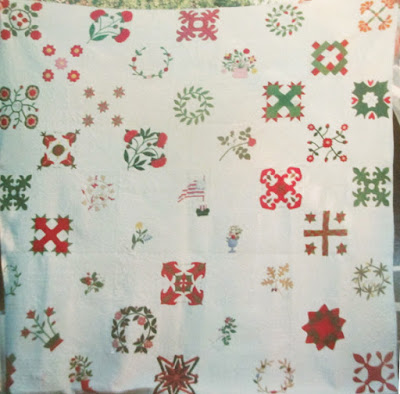 The flag is in the center of a pieced & appliqued sampler, typical of the 1850s & '60s. If I knew nothing about it I'd guess midwest: Ohio, Indiana, Illinois by the matter-of-fact set. Nothing fancy,
just the blocks and a lot of white leaving space for the quilting which was fancy. 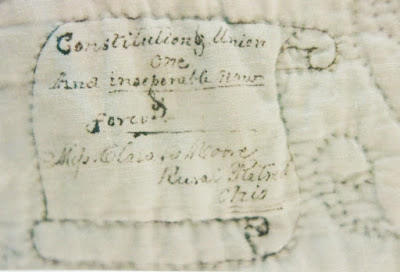 But the blocks are signed with names, dates and places. 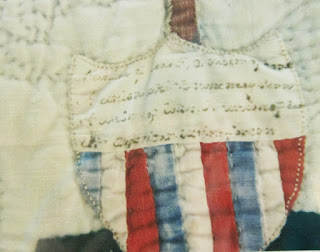 Below the flag is a shield with an inscription. I blew the photo up and drew over the letters,
laid it on my desk and everytime I walked by tried to read it. After a few
weeks I've come up with:

I was hoping that was enough information to find a similar poem online, but came up with nothing.

Clara was one of eleven members of the Moore family to sign the blocks. There are 38 signed blocks with place names in Clermont and Belmont Counties, Ohio and Kentucky, Indiana and Tennessee. Dates range from August 10, 1859 to 1861. 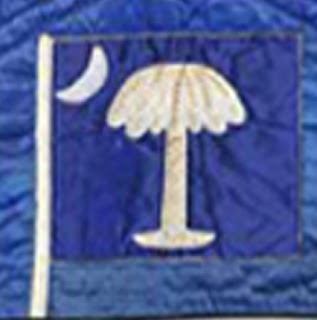 Contrast this quilt with its political message to one made about the same time in South Carolina, the other side of the sectional divide. See a post here:
http://civilwarquilts.blogspot.com/2019/12/maria-harpers-confederate-memorial-quilt.html

Linda wrote: "Included in the quilting are blocks illustrating the Capitol building, an anchor, telescope and a globe, a lyre, a pineapple, and a trapunto dog."

I mentioned Linda's quilt in the book but we didn't photograph it, which is too bad. It would be nice to have good photos of the blocks and more information about the names and places.

Clara's block refers to a motto that excited much discussion and sectional division in the decades before the Civil War. Massachusetts Senator Daniel Webster asserted in the Senate in 1830 that the U.S. was not an association of sovereign states able to choose which laws to obey, as many Southerners argued. Liberty to follow regional interests would destroy the constitutional idea of a union. Liberty yes, but "Liberty and Union, now and forever, one and inseparable." 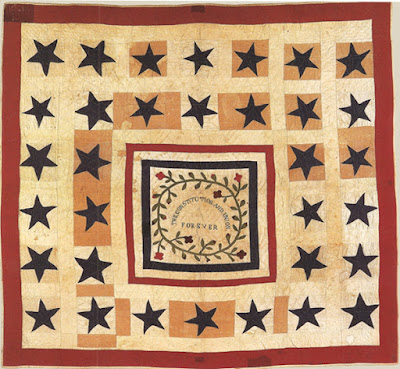 Elizabeth changed the rallying cry to "The Constitution & Union Forever" Always fascinating! Thank you for taking the time to post all these wonderful quilts and their history. I hope you had a nice holiday and Happy New Year ahead!

Union and Constitution forever - in our era we have a president who picks and chooses which part of the constitution he will follow...... wonder if any one in our era will make a quilt?

Yes, always fascinating! I know it is difficult to read but could Miss Clara D. Moore's location be "Rural Retreat"?
Happy new year to all.

What an incredible gift for any institution, Barbara. Thank you for choosing the IQSC at Lincoln as the recipient of all your hard work over many years. And while I know it was a labor of love and great passion, thank you also for the years of study and documentation of quilts that may have been lost to posterity but for you. Just your blogs are certainly a great education to all of us. Thanks again for a wonderful life time of educational works.