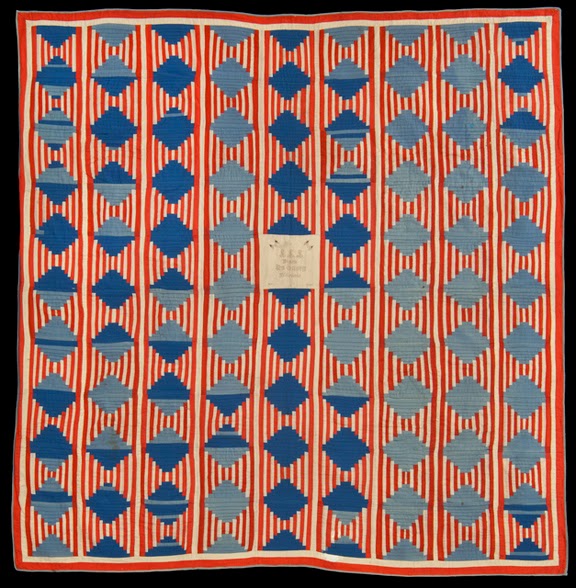 Last week I posted an argument that this log cabin quilt date-inscribed May, 1865, was made after the Civil War years, perhaps dating to the 1880s or later.

I asked several questions many concerning the inscription. 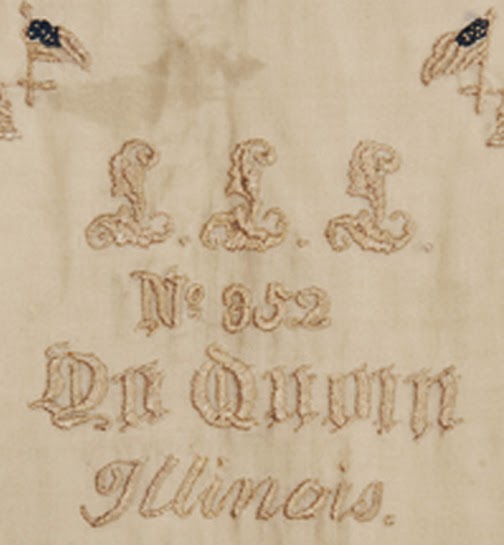 The Minnesota Historical Society links the initials L.L.L. to the Loyal Ladies' League

The Loyal Ladies' League seems to have had several incarnations. Early references were to a Union organization founded in 1863. The history of the Springfield, Illinois, chapter tells us about the evolution of their goals.


"The 'Loyal Ladies' League of Springfield' was formed on May 13 [1863] after an advertisement was published in the Journal on the twelfth calling for "all loyal ladies of Springfield" to meet ... "for the purpose of forming a Ladies' Union League." At the meeting, each prospective member was required to sign a pledge promising unconditional support to the national government. Though the organization was at first designed only as "an associated expression of loyal sentiment," its members — numbering several hundred — quickly adopted the goals of aiding the families of soldiers as well as aiding sick and wounded soldiers....The league also worked in close fellowship with the Soldiers' Aid Society, sometimes joining them in projects to aid the soldiers, such as purchasing potatoes to send to Illinois soldiers in the field and giving picnic lunches for the soldiers at Camp Butler." 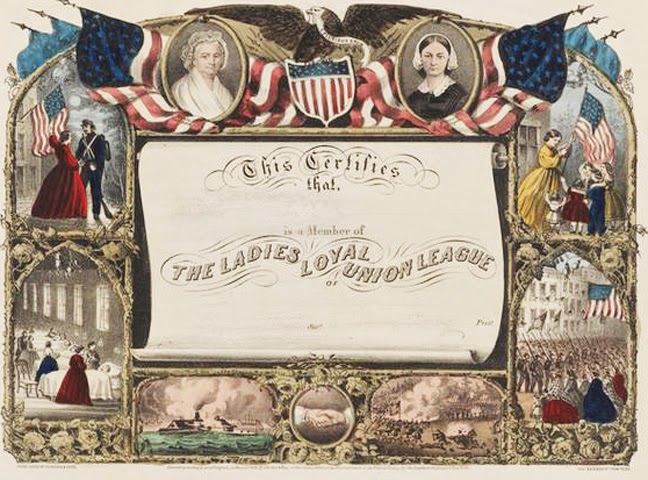 During the War the word "loyal" signified strong Union sentiments in Northern states where many proclaimed Southern sympathies. Towns in southern Illinois like Du Quoin were home to sectionalism that divided neighbors and families. Perhaps the date of May, 1865, refers to the organization of the Du Quoin chapter of the LLL. However, I can find no online references to that chapter other than in the quilt in question. 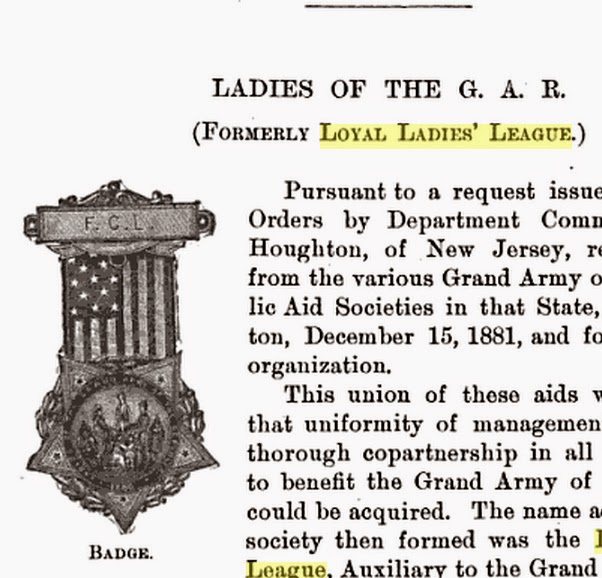 The badge has the initials F.C.L at the top, further confusing the issue. 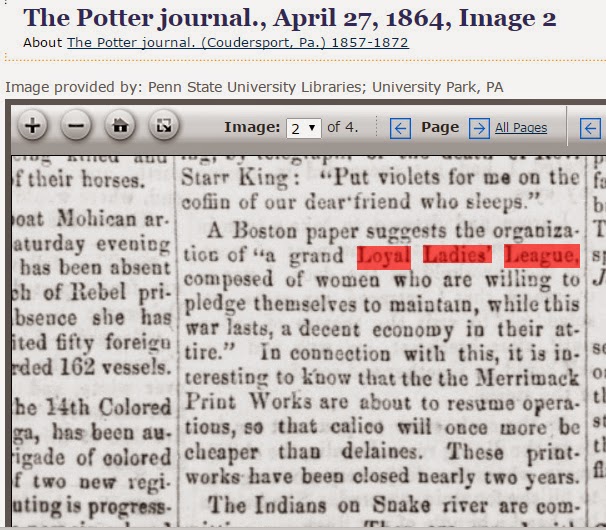 There are  references to a Loyal Ladies League encouraging women to wear economical clothing during the last part of the Civil War. Presumably, wearing imports was unpatriotic and dressing to excess showed little sympathy for soldiers. Above a reprint of an article from a Boston
paper suggesting:

"the organization of 'a grand Loyal Ladies' League, composed of women who are willing to pledge themselves to maintain, while this war lasts, a decent economy in their attire.' ....The Merrimack Print Works are about to resume operations, so that calico will once more be cheaper than delaines. These printworks have been closed nearly two years." 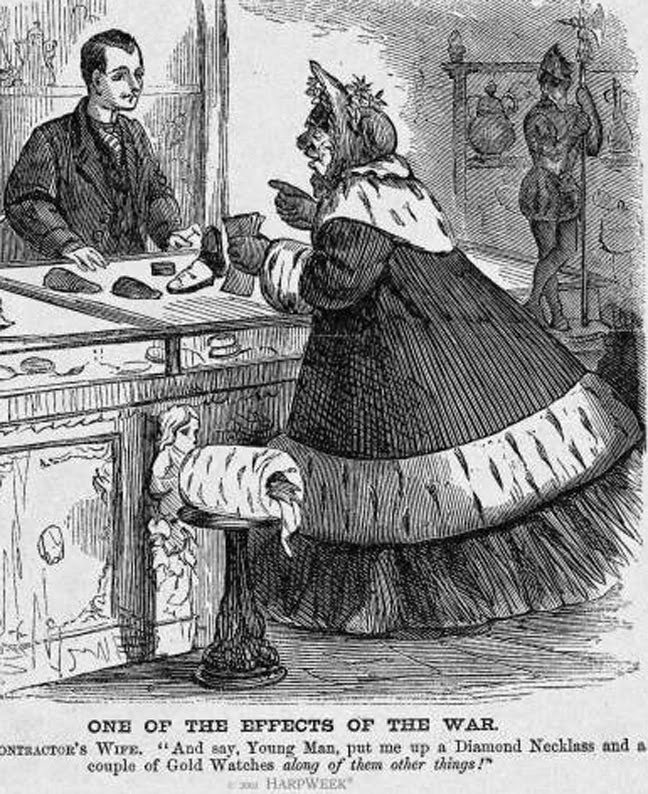 Harper's cartoon satirizing an Army contractor's wife
dressed to the nines and buying diamonds and gold.

After the War ended several women's organizations maintained patriotic and relief activities. Dissension eventually occurred between the LLL and another large women's group. The LLL confined membership to wives and families of veterans while the competing Women's Relief Corps (WRC) welcomed all women. In the 1880s (a variety of dates are given in various sources) the Loyal Ladies' League changed its name to the Ladies of the Grand Army of the Republic. 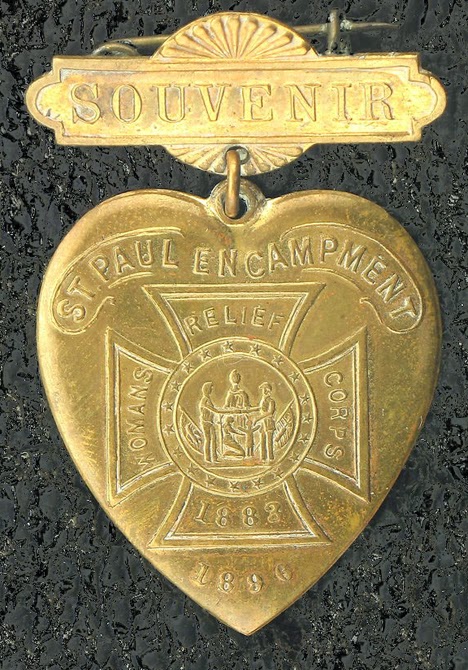 The WRC became the official Auxiliary of the largest Union veterans' organization, the Grand Army of the Republic (GAR.) 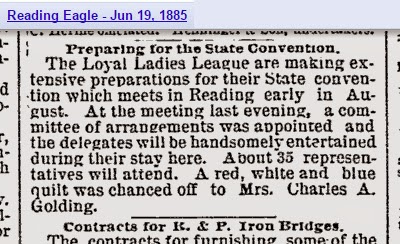 In Reading, Pennsylvania in 1885 The Loyal Ladies League
"chanced off" a red, white and blue quilt, presumably
to fund the organization's upcoming State convention.

In 1946 the "Loyal Ladies league met at the church basement
Friday afternoon and finished a quilt"
in Heppner, Oregon.

Did the loyal ladies evolve into a group to support World War II veterans?

Detail from the Currier & Ives print

I found few answers as to what the Du Quoin quilt's inscription meant. The history is bound up in the complexity of Reconstruction, fraternal organizations and post-war politics. Loyal also implied Republican party allegiance after the war. 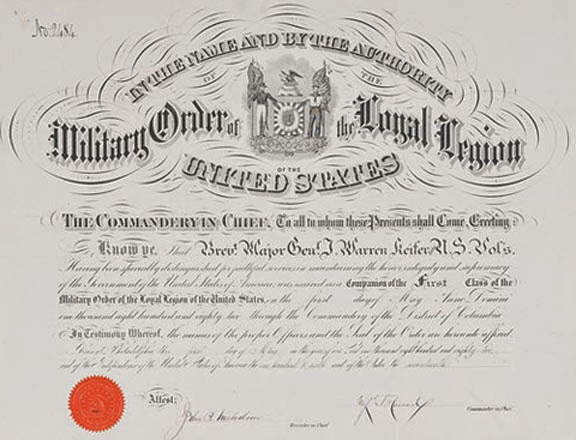 The Military Order of the Loyal Legion---for men 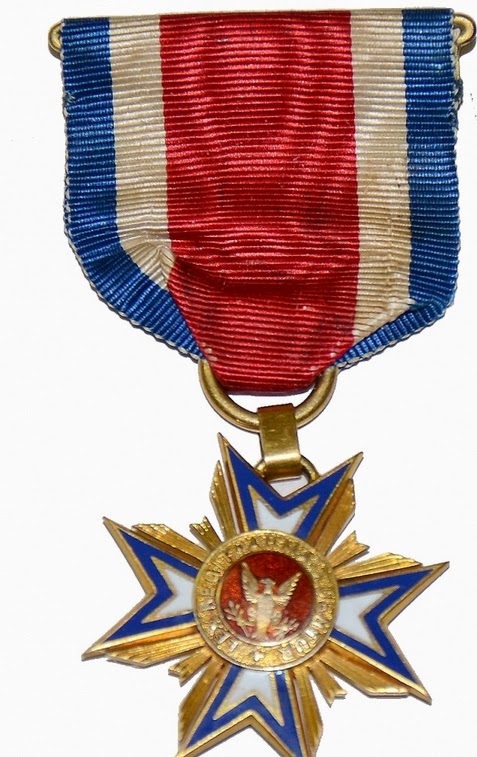 Badge for the Loyal Legion of the GAR---a men's group 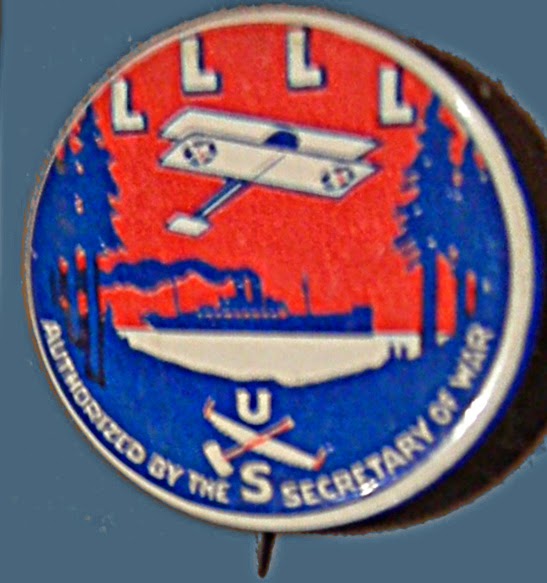 The Loyal Legion of Loggers & Lumbermen
(from World War I?)

I doubt the quilt was made by the woman with the initials L.L.L.---Lucy Lee Lamson, whose son donated it. I'm guessing it was made some time after 1880---

Donor Watson Lamson lived into his 90s, dying in 1935. A veteran of Company B 7th Minnesota Infantry, he may have purchased this quilt at a fundraising raffle, a reunion or it may have been a gift. The possibilities are vast. 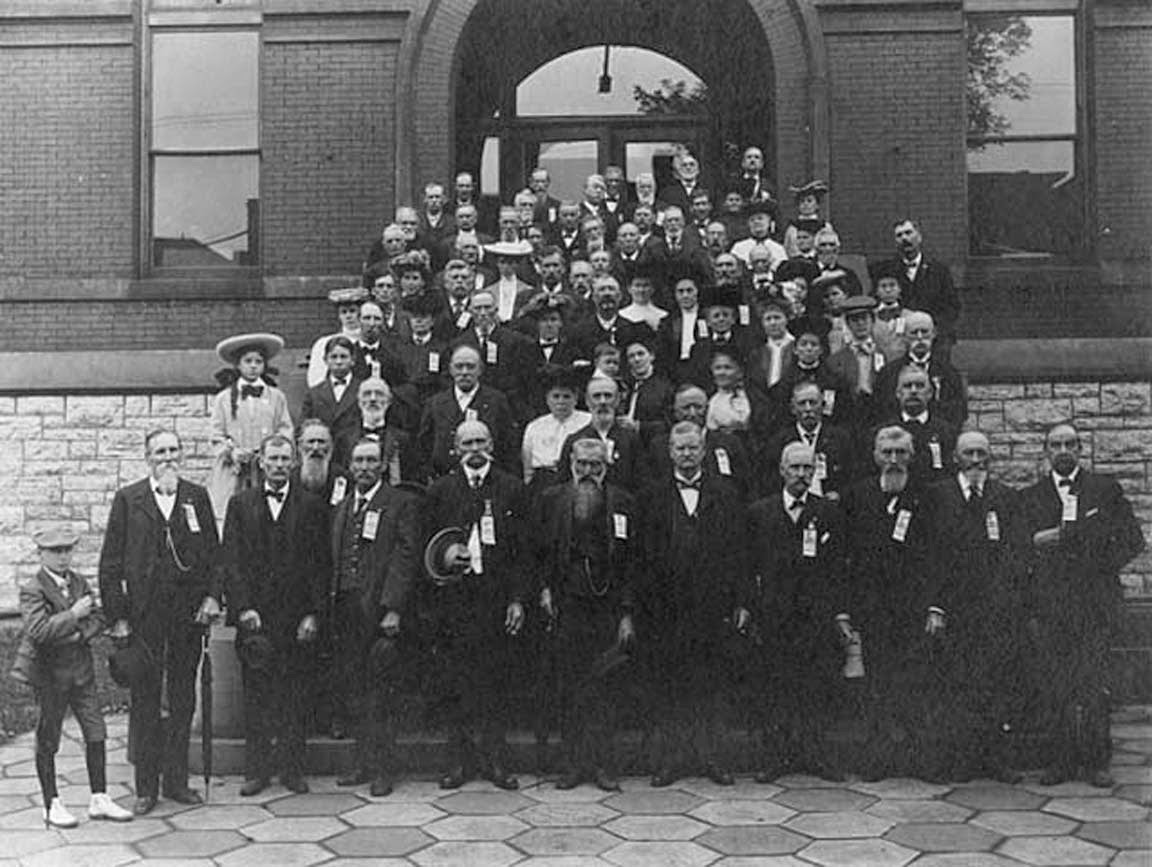 Lamson died in 1935 so was likely to be in this photo as a man about 60 years old. A county history tells us: "Socially he is connected with the Grand Army of the Republic." 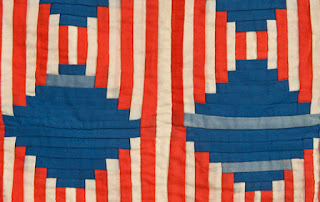 So I can come up with nothing but the quilt in patriotic
colors would have been quite appropriate possession for
the Lamson family. Who made it, exactly when and exactly why
remain a mystery.

For more information about the Union or Loyal Leagues see this post at the "Opinionator" at the New York Times:

"The Rise of the Union Leagues" by Christopher Phillips:
http://opinionator.blogs.nytimes.com/2013/11/15/the-rise-of-the-union-leagues/

Read more about the history of the Loyal Ladies League:

The quilt at the Minnesota Historical Society website:
http://collections.mnhs.org/cms/display.php?irn=10335600&websites=no&brand=cms&q=quilt&startindex=176&count=25

And read more about other postwar quilts from women's organizations at this post:
http://civilwarquilts.blogspot.com/2014/03/ladies-auxiliaries-gift-quilts.html
Posted by Barbara Brackman at 6:00 AM

I was randomly doing a search on Civil War quilts and ran into your blog. Thanks for raising these questions. I have poked into research on this quilt for many years, also dismissing the original assumption that LLL stood for the maker's initials and that it dated to 1865. My working assumption in researching donations starts with "there's a kernel of truth to a family story." As you've concluded, the few things we know for sure is that the quilt was owned by the Lamson family and Watson Lamson served in the Civil War.