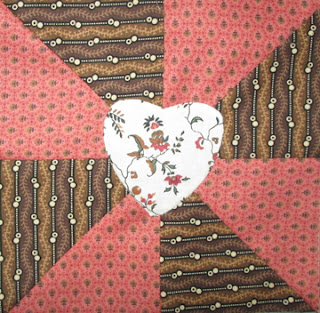 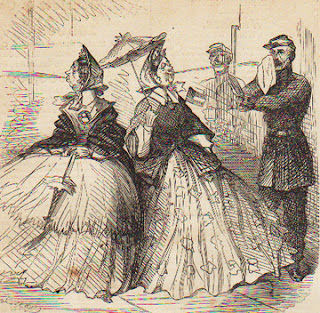 
July 1, 1862, Baton Rouge
"I heard such a good joke last night!...These officers say the women talk too much, which is undeniable. They then said, they meant to get up a sewing society, and place in it every woman who makes herself conspicuous by her loud talking about them. Fancy what a refinement of torture! But only a few would suffer; the majority would be only too happy to enjoy the usual privilege of sewing societies, slander, abuse, and insinuations. How some would revel in it. The mere threat makes me quake!...
Oh, how I would beg and plead! Fifty years at , good, kind General Butler, rather than half an hour in your sewing society! Gentle, humane ruler, spare me and I split my throat in shouting 'Yankee Doodle' and 'Hurrah for !' Any, every thing, so I am not disgraced! Deliver me from your sewing society, and I'll say and do what you please!" 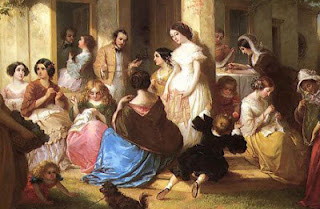 Detail of The Sewing Party 1857
By Louis Lang
Warner Foundation 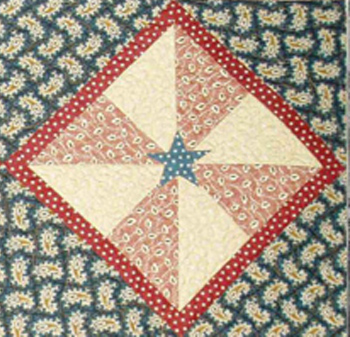 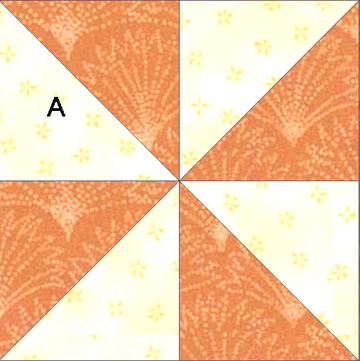 The pieced block has a BlockBase number.
BlockBase #1262a
(Don't forget the "a" if you are searching by number.)
Names include Mosaic and Millwheel 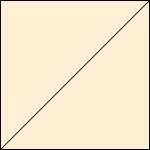 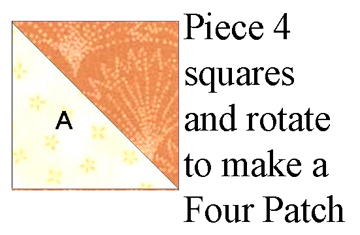 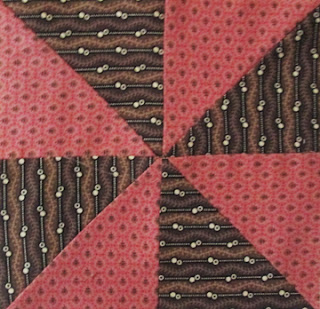 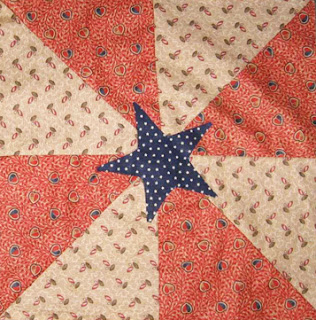 Applique a star or a heart after piecing. 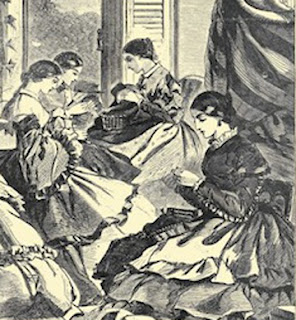 good morning saturday, I finally have all my fabrics now-so can begin sewing the blocks, should be caught up this month. I am enjoying reading the diary along with your posts too. thank you Kathy

Obviously the ladies in the sewing circles Sarah had experienced weren't quilters. We're all nice and perfectly good company!

Since I found this Civil War block of the month, I couldn't wait for today so I could get the instructions and story for Block 3. Thank you so much for putting this together for us to enjoy and sew along.

Miss Morgan is pretty amusing. Did The Beast steal her spoons? Speaking of Butler, I wonder if Sarah authored opinions on the KKK Act of '71, the Civil Rights Act of '75 and the '83 ruling. I'll check.

I, for one, wouldn't want the lovely people of Fort Jackson to suffer the company of the likes of Sarah Morgan but I am quite fond of Columbia and her folks. A Bronx Cheer for Sarah.

Her common opinion of sewing circles reminds me of Susan B. Anthony's disdain for Elizabeth Cady Stanton's sewing. Tsk!

Another good month. Thank you, BB.

Just wanted to say THANK YOU!!!

thank you from me too! your work is amazing!!!! hugs