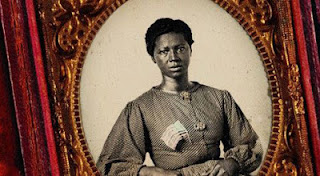 Image from the cover of
Envisioning Emancipation: Black Americans and the End of Slavery
by Deborah Willis and Barbara Krauthamer 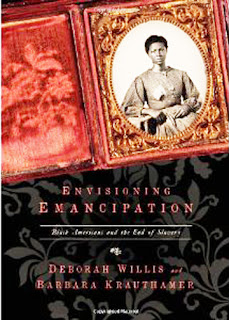 2013 marks the 150th Anniversary of the Emancipation Proclamation. In these times of little money for museum and other public exhibits it is good to find several shows devoted to the topic. 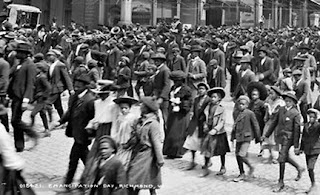 The Schomburg Center at the New York Public Library is in the closing weeks of the show Visualizing Emancipation featuring 80 photos of  "enslaved and free black women, men, and children. The images record the presence of black soldiers and black workers in the American South and help the 21st century viewer reimagine a landscape of black people's desire to be active in their own emancipation." The show, which is related to the book by Kratuhamer and Willis, closes on March 16th.

Read more about the book at the Temple University Press site:
http://www.temple.edu/tempress/titles/2253_reg.html

The authors are on a book tour so you might find them speaking in a venue near you this month.

The New York Times had a recent article in the Antiques column by Eve M. Kahn,
"Photographic Artifact of Black Civil War Troops," which discussed several exhibits and books on the topic

Other photographic exhibits on the topic: 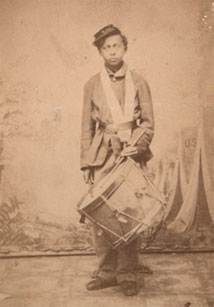 Boston's Museum of African American History commemorates the 150th anniversary of the Emancipation Proclamation and of the Massachusetts 54th Regiment, the first black soldiers from the north to serve in the American Civil War with an exhibit Freedom Rising, through December 2013
http://www.afroammuseum.org/exhibits.htm#Freedom_Rising_2013


At the Smithsonian in Washington:
Bound for Freedom's Light: African Americans and the Civil War
Up through March 2 next year 2014
"To commemorate the 150th anniversary of the Emancipation Proclamation, the National Portrait Gallery presents [an] installation that  focuses on the roles that individual African Americans played during the course of this hard-fought conflict....includes vintage photographs and historic prints, the majority drawn from the collection of the National Portrait Gallery. The installation’s curator is Ann Shumard, senior curator of photographs at the museum."
See more here:
http://www.npg.si.edu/exhibit/exhbound.html

And on the general topic of the Civil War Sesquicentennial:
The National Portrait Gallery has several other exhibits up. Here is a list of shows up in Washington now and in the future. The individual links may work. Otherwise try this:
http://npg.si.edu/exhibit/cw/npgcivilwar.html 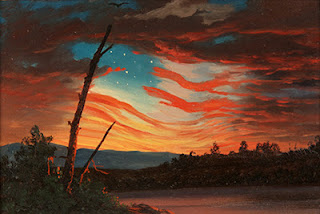 Frederic Edwin Church,  Our Banner in the Sky (detail),
1861 from the collection of the Metropolitan Museum.

New York's Metropolitan Museum of Art has two Civil War anniversary displays scheduled for summer 2013.
The Civil War & American Art opens May 28 and closes September 2, 2013. "More than two hundred of the finest and most poignant photographs of the American Civil War have been brought together for this landmark exhibition."
Plus a selection of American prints reflecting Civil War themes, by Winslow Homer, Thomas Nast, and others from May 20–August 25, 2013.

And if you want to stay home---here's an online photo exhibit about women and the war from the University of Maryland.
Women on the Border: Maryland Perspectives on the Civil War


http://www.lib.umd.edu/civilwarwomen/exhibition/introduction_womenwar.html
Posted by Barbara Brackman at 6:00 AM

Thank you for the research and history lesson. There is so much we don't know about the bravery of Black men and women during the horrific period of the Civil War.

Glad to see the famous "washerwoman" ambrotype on a book cover. Camp followers are a study unto themselves.

I am looking forward to making a Civil War Quilt and have signed up to follow your blog. I can not get the star or heart pattern, however. We have to update our flash player, but to do that we have to know a number which we don't know. Is there any other way that I can get the pattern for them.

Nancy. I'd do a websearch for Adobe Flash player and upload the latest version. But here's an alternative-go to the January 5 2013 post and I just added a JPG with the picture. Print it out at 8-1/2" x 11" and it should work.