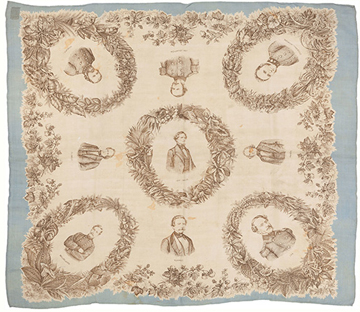 Silk handkerchief about a yard square
with blue/gray border
from the Railsplitter blog
http://railsplitter.com/?page_id=2772

While there are many Union textiles, particularly dress-scale prints, Confederate partisan prints are rare. The reasons are complex but have a great deal to do with the lack of a textile printing industry in the south. 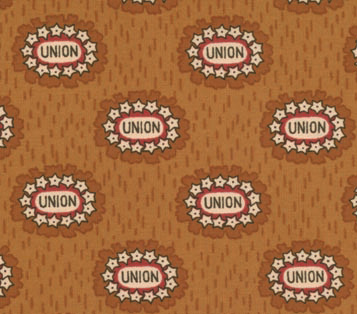 The mills were in the north. 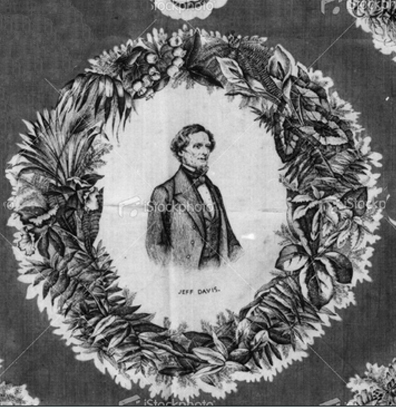 But there were mills in England that would take commissions. An English manufacturer printed this handkerchief featuring portraits of Confederate heroes. In the center is Confederate President Jeff Davis with generals in the corners. 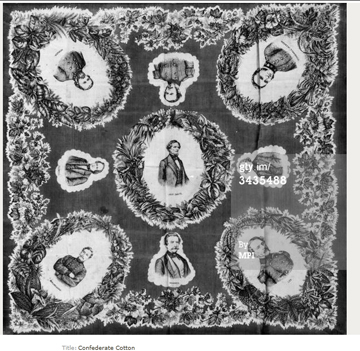 Those pictured, beginning at 12 o'clock:

The black and white photos are from Getty Images, which describes the dark version as a "Confederate cotton handkerchief printed in London, 1860." The Railsplitter blog noted "Examples are known in purple and powder blue."

One would imagine these textiles are rare indeed.

At the end of the nineteenth century there was some discussion of them in the press, including the New York Times, which in 1894 described two versions: a red silk example in good condition owned by Walter Aldrich of Providence, Rhode Island, and a worn white square with a blue border (much like the one at the top of the page) owned by Mrs. William Daingerfield Peachy of Washington, D.C. Lelia Russell Meem Peachy inherited it from her father Dr. Andrew Russell Meem. (See a picture of Lelia Peachy here: http://www.flickr.com/photos/27841557@N03/2594760859/

"About each of the vignettes is a wreath of finely executed cotton plants and fern leaves." The Times attributed the origins of these relics to two sets of twelve handkerchiefs ordered by Judah Benjamin when he was in England during the war."


The piece at the top recently sold at auction, and I've found references to a few other examples including one in a display (loaned by Miss Green) at the Confederate Museum in Richmond described in an 1898 catalog, which also mentioned the survivor in Providence, Rhode Island. An example in the Hall of History in North Carolina was described in a 1914 catalog and one in a Kenosha, Wisconsin public collection was described recently. The catalog of the 1888 Virginia Exposition listed a square loaned by Captain C.F. Johnston.

Questions
How many of these were printed?
Is that black and white photo really of a cotton bandana or were they all silk?
Did Benjamin actually order them when he was doing diplomatic work in London during our Civil War? The 1898 Confederate Museum catalog added to the romance with a story that Miss Green's piece was "One of twelve said to have been ordered from England by Judah P. Benjamin. Was rescued when on its way to this country from the Alabama when she sunk. Only one other [the Providence example] is said to have been saved.... 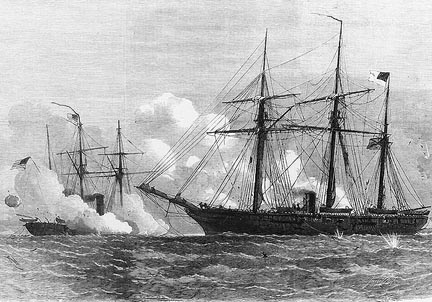 Rafael Semmes is pictured on the bandana. He was the commander of the CSS Alabama, another Confederate commission built in England in 1862 to harry Union shipping and run the blockade. The Alabama was sunk by a Union boat in French waters in 1864.

The CSS Alabama had it's own romance. Combining the story of the bandana with the boat seems to go a little too far in the mythmaking department. It's enough to know these were printed in small runs in various colors, that they made it through the blockades to the Confederacy and that so many survived. Now all we have to do is find a scrap of one in a crazy quilt.

Another question---since one has to be skeptical:  Benjamin escaped to England after the Civil War. Did he order these as post-War souvenirs?

Thank you for sharing--with the textile mills located in the northern states explains why there were so few southern textiles printed.

These would be wonderful worked into a quilt.
There are a lot of mills in our area and the surrounding states.

The block you posted by "Honas52" was actually made by "Patchwork Princess"!