THANK YOU VERY MUCH! 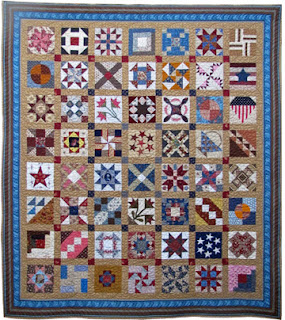 Circle of Friends
Somehow you all know about this surprise quilt made for me from blocks sent in by subscribers to this blog. 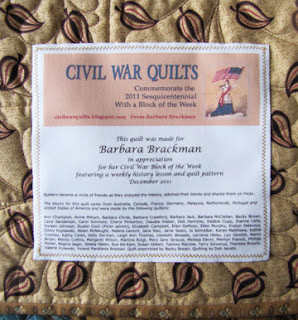 "This quilt was made for Barbara Brackman in appreciation for her Civil War Block of the Week...." 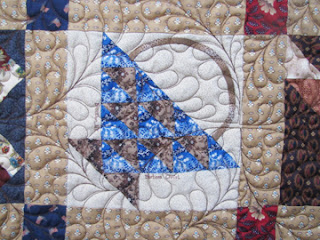 Dustin and Becky and others of you coordinated 49 [Becky says 56 not 49!!!] blocks from around the world. 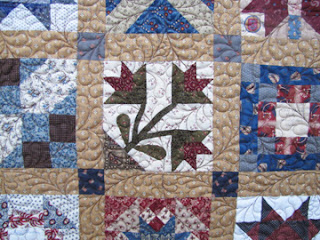 Becky set it and asked Deb Jacobs to machine quilt it. 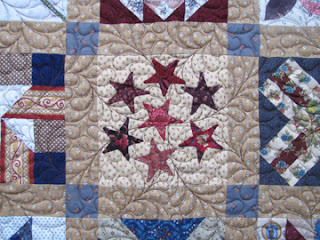 Both did a lovely job. 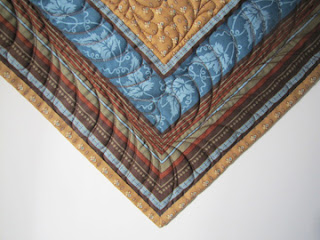 Becky bordered it with a stripe from the Civil War Reunion collection.
That's a heck of a miter. 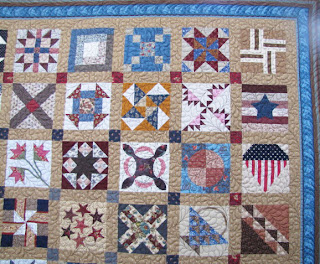 Becky used the sashing and cornerstones set for a 7 x 7 grid. 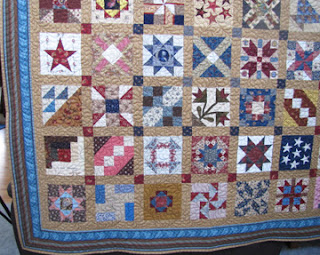 It's already off to the publisher for official photography for the book. 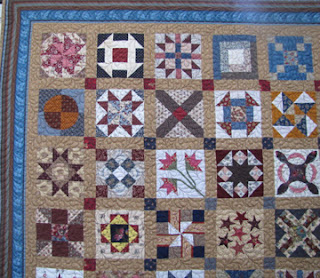 Here's what the label says:
Then it has all your names.


> This quilt was made for Barbara Brackman in appreciation of her Civil
> War Block of the Week featuring a weekly history lesson and quilt
> pattern December 2011 Quilters became a circle of friends as they
> enjoyed the history, stitched their blocks and shared them on Flickr
> The blocks for this quilt came from Australia, Canada, France,
> Germany, Malaysia, Netherlands, Portugal and the United States of America.
> Assembled by Becky Brown, Quilting by Deb Jacobs.

Thank you each and everyone. 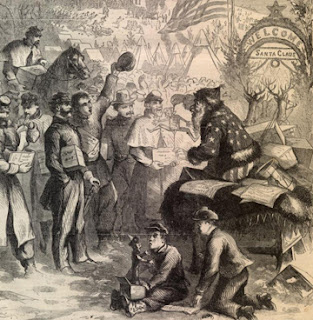 Christmas 1862 by Thomas Nast in Harper's Weekly
Posted by Barbara Brackman at 6:00 AM

You are most welcome Barbara! I am the one from Malaysia :)

I am still working on the blocks, some ways behind but I'll get there!

How lovely to see the finished quilt, I feel so honoured to be a small part of it. I so enjoyed the weekly blog. Thank you for both the history and the blocks. I have still to decide on my corner blocks,and am thinking of something like a friendship star, to remember what wonderful friendships were made through the year. (quilting Gammy, Australia)

Merry Christmas, Barbara, and thank you for the Civil War BOW Quilt blog. It has brought so many of us joy and excitement, weekly, and for the meaningful history lessons and photos from the past. Your sense of humor shines forth as well. The blog has developed friendship (cyper-style) for quilters all over the world, young and older. I treasure the friendships that have developed and look forward to more of your reproduction fabric lines! Go MODA! Warmly Susan, enjoy your quilt and what it symbolizes.

Barbara, congratulations! You so much deserve this treat! I have not been at the group, but I have read your blog regularly. I love the histories and the blocks. I do hope the patterns will be found at this blog in the future, and I do look forward to the book!
Merry Christmas to you from Elin in a very windy Western Norway.

awesome-what a fabulous gift, I loved this blog so much, and am reading your other books now on the civil war-thank you so much for all your hard work in researching this for us. Merry Christmas Kathy

Thank you Barbara for being able to have a wonderful opportunity to share with people from around the world and my family a little bit of history. It was a honor to be able to a part of such a wonderful thank you gift. Merry Christmas and a Happy New Year.

What an awesome gift! Merry Christmas to you.

Your blog is simply beautiful! It is a great tool for quilters and history buffs alike! I only found you recently and am a new quilter, but I am going to go to the begining and start pluggin away! Thank you so much!!

What wonderful readers you have! Your quilt is lovely.

Thank you so much Barbara for this wonderful year long quilting adventure. A block for your quilt was a small token of appreciation of the enjoyment you have given us this year.

Merry Christmas Barbara !
Thanks for this year 2011 with you
and CWQ . Friendship . Mamifleur

Lovely quilt; I'm sure you will enjoy it.
Hmmmm....I'm thinking that Thomas Nast illustration would be a great Christmas toile idea that would work for many styles of Christmas quilts!
Have a wonderful Christmas week!

It was an honour to be able to contribute a block for your quilt Barbara, I hope you have many hours of snuggle time under it over the coming years LOL!!!!
I have been a keen follower of yours for several years, have many of your books, and was really excited when you started this project! It has been a wonderful journey, Becky and Deb did an awesome constructing and finishing the quilt! Thankyou for your time and efforts, I look forward to the book when it is published!! All the very best for 2012!!!

You are very welcome, Barbara! I am Barbara from Texas and it has been a pleasure each week to see what surprises and challenges you have in store for us. Thank you so much and have a wonderful Christmas!
Barbara

Barbara-
Merry Christmas and thank you for a memorable year of friendship and quilting. I have loved being part of this adventure. I have learned so much and was thrilled to be able to make a block for you! I hope we all find a way to stay connected. I am the Barbara in Brooklyn aka beecee.

Merry Christmas Barbara, what a wonderful journey we have had these past twelve months...I have enjoyed all what was entailed with the Civil War Block of the Week....it was an honour to be part of your surprise quilt...I am one of the Australians who made a block....looking forward to the publishing of your book.....to think I failed history when I was at school....have loved reading your weekly blog posts that related to each block....thankyou Barbara for the opportunity to put together a quilt of our own...Warm Regards, Lyn...aka Bluebird Quilts..

This has been a wonderful and uplifting year thanks to all of you.

Hi Barbara,
You are most welcome. This is Ellen from American Homestead. I have carried my "Brackman Bag" literally around the world, faithfully stitching my blocks each week, even by hand when necessary. It has been a fun year with so many of us eagerly awaiting Saturdays at 7am. I have kept up each week and look forward to finishing my quilt.
It is amazing the friendships that have formed over this quilt, many that I think will carry on after the project concludes.
My question is...what am I going to do after next week?
Thanks again, Ellen

Such a gorgeous quilt, and such a nice surprise :o)
Hope you've been enjoying the Holidays, and still do :o)
Laila

SO happy for you! What a wonderful thank you present for all that you did for us all year long. Even though I didn't keep up with the blocks - I enjoyed them AND the stories that went along each week. Thank you for all your hard work - we really did appreciate it! Hope 2012 is a wonderful year for you and your family :)

Happy holidays to you and a happy new years as well. Richard

This CWQ has been a very important step into the world of patchwork for my friends who have followed this adventure in France, thank you so much Barbara! And Martine is very proud to take part to this Circle of Friends.
Have a happy and creative New Year!

Now I have no reason to race from bed to my computer and then to my sewing machine on Saturday mornings :-( Thanks for a wonderful series!

A hearty thank you for the joy you have given me and so many other quilters around the world!! Enjoy your beatiful quilt, you deserve it!! Looking forward to seeing your future projects :)) cheers, Marian in sunny Australia