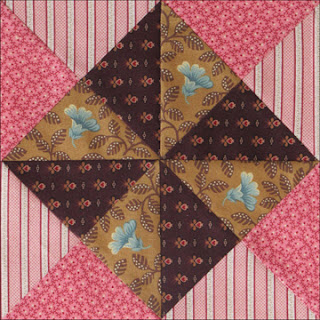 Yankee Puzzle by Becky Brown
Yankee Puzzle can recall the basic problem in Lincoln's war philosophy. Liberty and Union. Was it possible to have both? 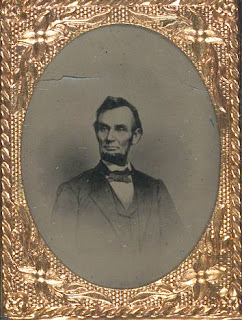 President Lincoln from the Library of Congress collection

On December 3, 1861 Lincoln gave his first State of the Union address to Congress. He discussed a variety of administrative details but danced around a major policy decision---how to end slavery.

"Under and by virtue of the act of Congress entitled 'An act to confiscate
property used for insurrectionary purposes,' approved August 6, 1861, the
legal claims of certain persons to the labor and service of certain other
persons have become forfeited, and numbers of the latter thus liberated are
already dependent on the United States and must be provided for in some
way." 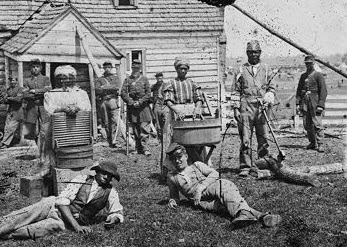 Freed people working in a Union camp in Yorktown, Virginia, 1862
Photo by James Gibson. Library of Congress.
In other words: General Butler's policy of declaring slaves as contraband of war was now law. What of the thousands of Contraband camping on the edges of the free/slave map that was being rewritten every day? How to care for them? Where to care for them? 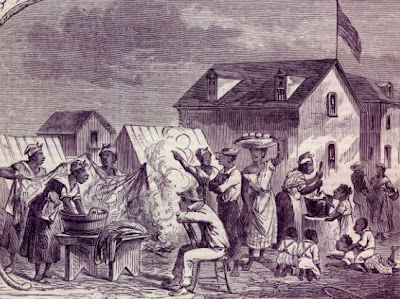 Harper's Weekly, December 21, 1861.
This sketch of the refugee community in Beaufort, South Carolina,  is full of stereotyped imagery,
particularly in that it is titled "Work's Over."  You may notice this detail shows the women still working.
Nothing new. Is that a quilt or bedspread they are washing?
Lincoln's tentative solution in 1861: colonization---
" at some place or places in a climate congenial to them. It might be well to consider, too, whether the free colored people already in the United States could not, so far as individuals may desire, be included in such colonization."
The federal government might budget funds to acquire a new territory:
"If it be said that the only legitimate object of acquiring territory is to furnish homes for white men, this measure effects that object, for the emigration of colored men leaves additional room for white men remaining or coming [to the new territory]."
This speech with its idea of a separate home for free blacks and freed blacks was just one small step in a solving a confounding puzzle: How to untangle the complex knot of slavery and save the Union at the same time. 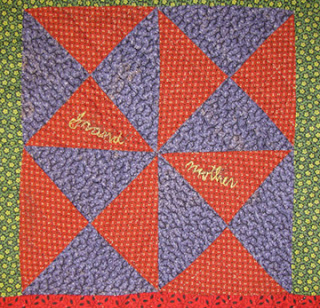 Block from about 1900
Recall the State of the Union in 1861 with an old block called Yankee Puzzle by Ruth Finley in her 1929 quilt book. Other names for the design are Big Dipper, Electric Fan, Hour Glass and Pork and Beans.
(BlockBase #1195b) 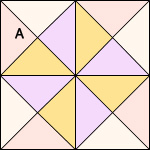 Cutting an 8" Finished Block
There's only one piece, triangle A.
A - Cut  1 square 5-1/4" each of light pink, dark pink, tan and brown Cut each into 4 triangles with 2 diagonal lines. 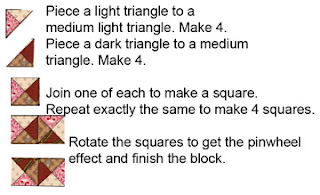 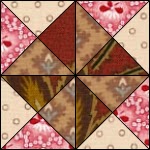 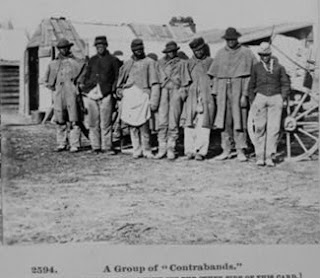 Thank you for this new block, and the reasoning behind it's inclusion. I was wondering if this was the time that the country of Liberia was "founded" in Africa, and the ships took those who wanted to leave. Or if I have that story completely wrong.

Wonderful block. Thank you for the stories to go with the blocks. What a different time that was!! Joined late so still working on catching up. Have made 20 so far.

Have all 49 completed and have enjoyed this project so much! Hope there is another to follow when this one is completed. Great quilt with so much history!

Lovely quilt blocks. Enjoy reading the history of the quilts.

This was a nice easy block. I have completed my block and posted it on my blog along with a how-to.
http://lillianscupboard.wordpress.com/2011/12/04/civil-war-quilt-block-49-yankee-puzzle/

Thank you Barbara for keeping me busy for a whole year. I really enjoyed making these blocks very much. Only I have this little problem, that some blocks are a littlebit smaller than others. What can you recommend as being the best way to put the blocks together without the difference being very visible? Elizabeth from Holland.

As always I really enjoy the blocks you've chosen to include in this project. I'm going to be very sorry indeed to see the end of the year and the end to this wonderful blog. I hope you have plans to produce a similar Civil War related project in the near future. I've bought so much reproduction fabric for this one I have enough for 3+ more quilts!
McKenna
textilediva.blogspot.com

I would like to know how this block got the name "Pork and Beans" as well as Yankee Puzzle. I searched the internet and found no reference to a quilt block called "Pork and Beans." However, I did find several references to a block called "Corn and Beans" which looks nothing like our current block. Could you please explain this reference or tell me where I can learn more about it. Thanks.

I can see you need a copy of the Encyclopedia of Pieced Qult Patterns or BlockBase in which you could look up this block #1195a. ?The Canadian Maritime Farmer newspaper gave the old block this name in the 1920s or '30s. Why? No way to know. Maybe:Pork and Beans is a two-part dish and so is this.
Barbara