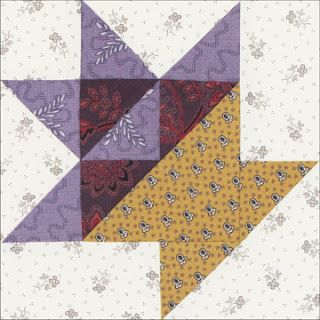 Grapes of Wrath is a modification of a traditional pattern called Grape Basket. The block can remind us of a new version of the "John Brown Song," written in late fall, 1861. 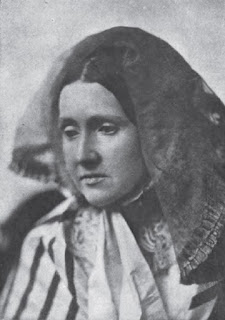 Julia Ward Howe's biography tells the story of how she came to write the "Battle Hymn of the Republic" on a visit to Washington City.
"Returning from a review of troops ..., her carriage was surrounded and delayed by the marching regiments: she and her companions sang, to beguile the tedium of the way, the war songs which everyone was singing in those days; among them – 'John Brown's body lies a-moulding in the grave. His soul is marching on!'

The soldiers liked this, cried, 'Good for you!' and took up the chorus with its rhythmic swing. 'Mrs. Howe,' said [a friend] 'Why do you not write some good words for that stirring tune?'
'I have often wished to do so!' she replied.
Waking in the gray of the next morning, as she lay waiting for the dawn, the word came to her.

'Mine eyes have seen the glory of the coming of the Lord – '
She lay perfectly still. Line by line, stanza by stanza, the words came sweeping on with the rhythm of marching feet, pauseless, resistless. She saw the long lines swinging into place before her eyes, heard the voice of the nation speaking through her lips. She waited till the voice was silent, till the last line was ended; then sprang from bed, and groping for pen and paper, scrawled in the gray twilight the 'Battle Hymn of the Republic.'

The first draft, pictured in her biography.
She was used to writing thus; verses often came to her at night, and must be scribbled in the dark for fear of waking the baby; she crept back to bed, and as she fell asleep she said to herself, 'I like this better than most things I have written.' In the morning, while recalling the incident, she found she had forgotten the words. 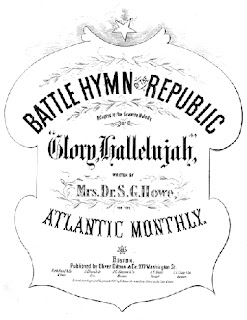 The poem was published in the Atlantic Monthly for February, 1862. 'It was somewhat praised,.... I knew and was content to know, that the poem soon found its way to the camps, as I heard from time to time of its being sung in chorus by the soldiers.'

Julia Ward Howe in 1861
She did not, however, realize how rapidly the hymn made its way, nor how strong a hold it took upon the people. It was 'sung, chanted, recited, and used in exhortation and prayer on the eve of battle.' It was printed in newspapers, in army hymn-books, on broadsides; it was the word of the hour, and the Union armies marched to its swing.


Her song still has a strong hold upon Americans.
Mine eyes have seen the glory of the coming of the Lord:
He is trampling out the vintage where the grapes of wrath are stored;
He hath loosed the fateful lightning of His terrible swift sword:
His truth is marching on.
Glory, glory, hallelujah!
Glory, glory, hallelujah!
Glory, glory, hallelujah!
His truth is marching on.
Her poetic phrases, many drawn from her knowledge of the Bible, have become icons in the American language. The Grapes of Wrath (borrowed by John Steinbeck for his book about the Great Depression) comes from a description in the Book of Revelations of fruit pressed into "the great winepress of the wrath of God." 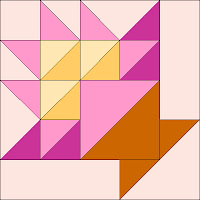 The Ladies' Art Company pattern business sold this design as Grape Basket (BlockBase #712) beginning in the late 19th century. Similar patterns date back to the time of the Civil War. This week's block has a similar look with fewer pieces. 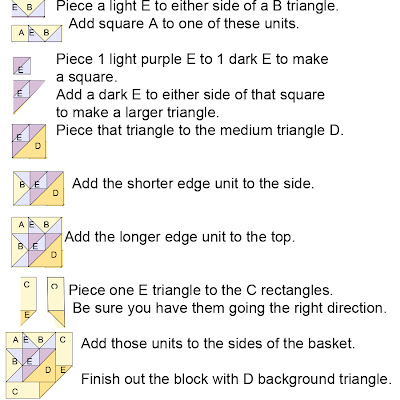 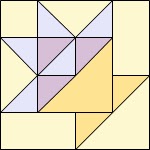 Hear a version of the "Battle Hymn of the Republic" by a chorus on YouTube by clicking here:
http://www.youtube.com/watch?v=p5mmFPyDK_8
You can compare it to "John Brown's Body" by clicking here:
http://www.youtube.com/watch?v=g74t-eNWEro&feature=related
Read a bioigraphy of Julia Ward Howe:
Julia Ward Howe, 1819-1910 by Laura E. Richards & Maud Howe Elliott. Boston and New York: Houghton Mifflin Company, 1915. It's online at this University of Pennsylvania website:
http://digital.library.upenn.edu/women/richards/howe/howe-I.html#VIII
Posted by Barbara Brackman at 6:00 AM

Thank you fro sharing the blocks.

That was such an interesting story....I've always loved that song, but didn't know the history of it. Thanks!

Can't begin to tell you how much I am enjoying your blog and the patterns and history your sharing with us. Will you make this into a book someday? Hope so-it would be a great book on Civil War history alone. Thank you so much!

Thank you. I have been enjoying all the blocks. I have fond memories of teaching a beginning quilter years ago to make a baby quilt out of this block.

A pretty block and I love the song. I have completed my block and posted it on my blog along with a how-to.

Thank you for sharing your time, talent and knowledge by providing these blocks each week. I'll be watching for the book.