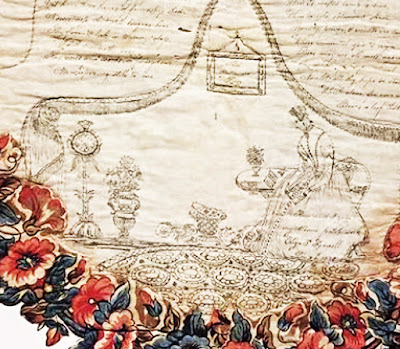 The center of an antebellum album quilt features an inked self-portrait. I thought you inkers might be inspired to make a label for your Antebellum Album. 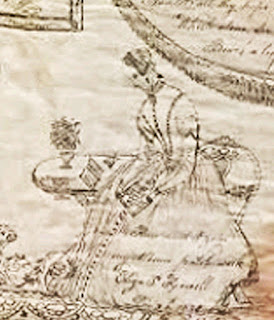 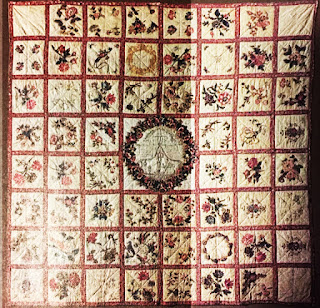 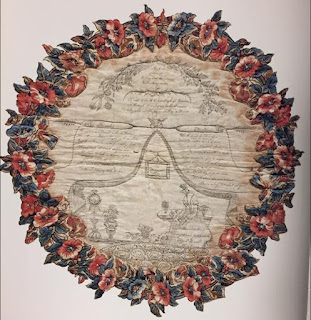 The large center block is framed with a wreath of what look to be morning glories,
cut from a panel, the Trophy of Arms. 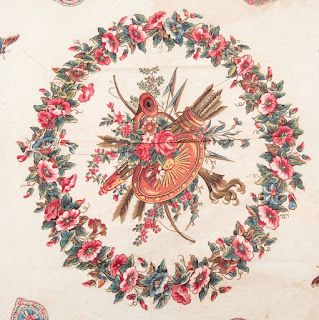 Trophy of Arms panel
She's cut parts of the circle, which is about 21" across,
and made her wreath more compact.

The family who donated this quilt to LACMA bought it for $3 many years ago in western Washington state. They thought it might be from New York, but I see the LACMA caption now also suggests New Jersey, which makes more sense. These albums were quite popular in the New Jersey/Pennsylvania Delaware River valley. 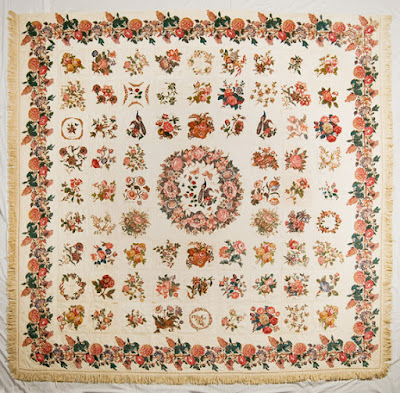 In format it is much like the larger Fish/Perrine family quilts. The album above has
several Howell signature blocks. 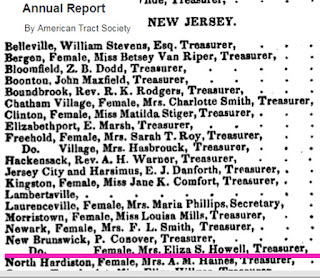 There was an Eliza S. Howell in New Brunswick, New Jersey
active in the American Tract Society about the time the quilt was made. The American
Tract Society funded religious literature.

Thank you for this suggestion Barbara. The penmanship and ability to draw in ink on fabric shown in these examples impress me greatly. While my label may very likely be inked I doubt it will be an inked extravaganza.

That's a beautiful example of 'inking'.
I like using fabric with writing, postal marks, maps printed
on it.
And the album quilts with signatures in each block
are fascinating.

This is an amazing work of art. I love how the room is shown decorated, with flowers in a vase on the table, framed piece on wall and maybe a hooked rug underneath! I which I could read all the inked details. Thanks so much for sharing this.

what talent the maker had to do this! Hopefully BEFORE appliqueing the flowers on!