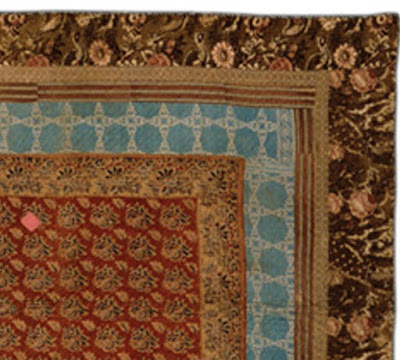 An unusual quilt with a Civil War tale. According to museum notes:


"This pieced quilt has been passed through four generations of Susannah Johnson Justice's family....[She] fashioned the quilt in 1875 to commemorate her country's centennial and as a memorial to her late husband Jeremiah Justice.....Susannah had a large handkerchief, reported to have been carried by her husband in the Civil War. In 1875 she decided to use it to make a centennial quilt in honor of the centennial which would be celebrated the following year."

The 1876 Centennial inspired a resurgence in quiltmaking and many quilts have links to the celebration. This framed center style in this one looks older, however. 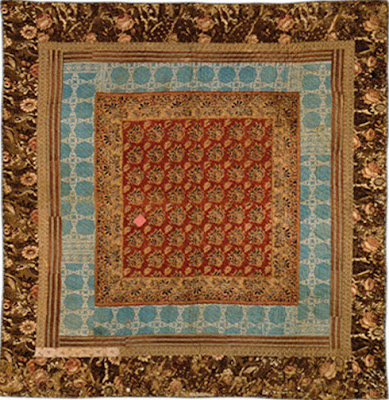 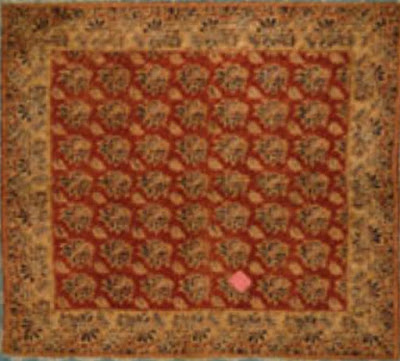 I calculated that the center piece is about 36" square.
It certainly looks like a bandana or kerchief.

The quilt's style and fabric look earlier than 1876 or even 1856. The center square is
really no help in dating as they were produced over such a long period
and so popular. 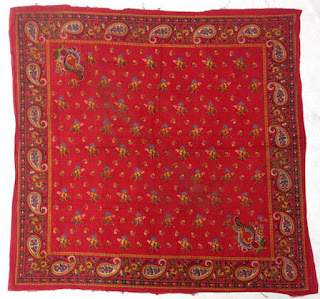 Kerchief, about 1820, England, about 29"
Collection of the Victoria & Albert Museum

Two printed in England in the early 19th century. 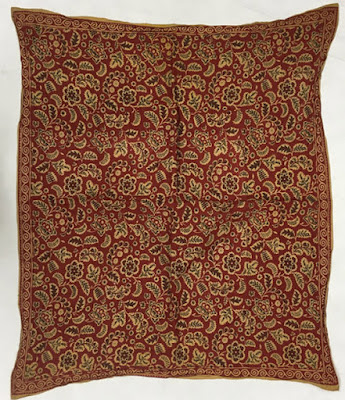 Kerchief, about 1810, England
Collection of the Victoria & Albert Museum
about 35 inches

A soldier might well have carried a similar red handkerchief with him during the war but
the frame style and the other fabrics look to be decades earlier than the Civil War. 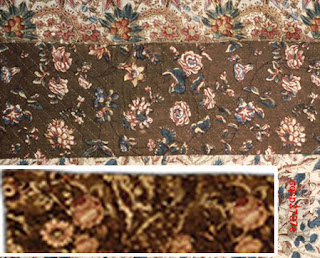 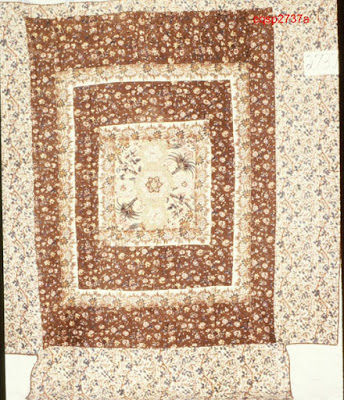 The Justice quilt may well have been a family heirloom passed down from the Justices or the Johnsons. And somehow a Civil War/Centennial story became linked with it. 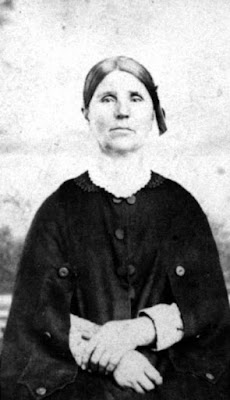 More from the museum notes:

"Susannah Johnson was born somewhere in Pennsylvania ca. 1813. Before 1820 her parents had moved to Tuscarawas County, OH. She was married in Holmes County, OH, March 6, 1834 to John Justice, who died January 11, 1849 in Wood County, OH. She then married his younger brother, Jeremiah, who was several years younger than she, and moved to Fulton County, OH. There Jeremiah enlisted in the Civil War along with his nephews/stepsons.

"None of the families today know what happened to Jeremiah after he was mustered out at Louisville, KY, in August 1865, exactly 3 years after he entered service, but he had been in ill health much of that time and it is assumed that he soon died.

Veteran's ribbon from the 111th O.V. I.
Ohio Volunteer Infantry

"About 1867 Susannah and all her children, married and unmarried, moved to Campbell Township, Ionia County, MI."

An 1872 county directory lists Mrs. Susan Justice on Campbell Street. Thomas Jefferson Justice her son, born in 1843. He and brother Wesley, born in 1839, were veterans of the 67th Regiment OVI. Both are listed on the bronze tablets on Fulton County, Ohio Soldiers Monument completed in 1918. 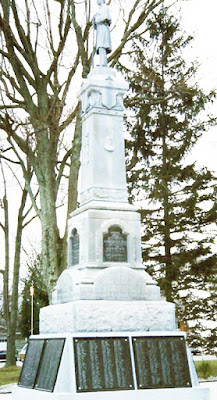 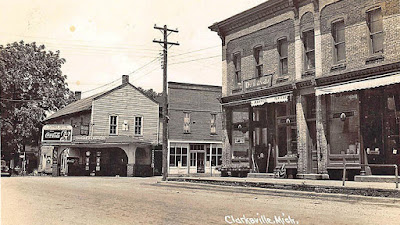 Clarksville, Michigan was the closest town to rural Campbell Township.
It just seems unlikely the quilt was made in Michigan in the 1870s.

There's some good history, thanks for sharing.
I like the idea of a kerchief medallion quilt. The prints in
your photos are beautiful.

While I'd not like to have lived in those days, I do sort of envy the availability of handkerchiefs large and quality enough to use in a quilt. Today's handkerchiefs, at least those I find, are too small and flimsy. Or maybe I'm not looking in the right places?

There is nothing to say it was NEW when he carried it in the war. He could have had it for years. I like the story.

It does seem clear that the Justice family was in Clarksville in the 1870s, according to the family records, and that the quilt was probably made there. My niece is married to Thomas Jefferson Justice's great-great-grandson, and they live in Clarksville. Though I knew nothing about the quilt till today!