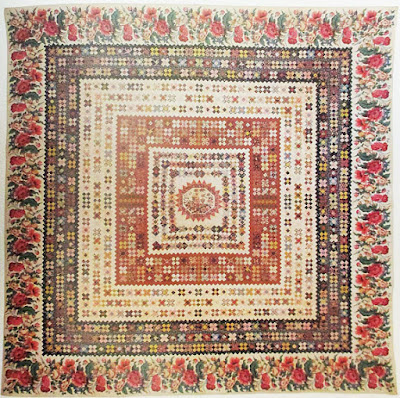 An elegant quilt from Patricia Smith's collection, pictured in the catalog Calico & Chintz.


"One chilly night it was taken from a plantation mansion by a Union officer---a Captain Tory from Foxboro, Massachusetts. Along with the story of its wartime acquisition, the spread was handed down for generations within the same family."

Another quilt that should have been buried with the silver but wasn't, appropriated during the Civil War. Can we find out more about Captain Tory?

Tory is not a common name but what if it was Torrey? I quickly found a Captain William H. Torrey from Foxboro/Foxborough (you can spell it either way) who had a distinguished Civil War record, particularly with the 55th Massachusetts Infantry, also known as the 55th Massachusetts Colored. He was later promoted to Major for "gallant and meritorious services." The 55th Massachusetts Colored Infantry was photographed soon after the outfit was formed in 1863. Torrey may be one of the white officers. 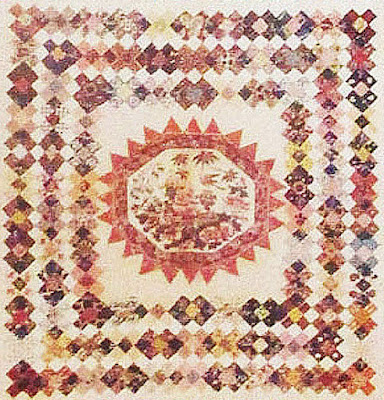 In five years of Civil War Torrey saw a good deal of the South, but this quilt with its medallion center and chintz border has the look of South Carolina, a location that matches the family tale. The 55th Massachusetts was in South Carolina from 1863 to the end of the War. 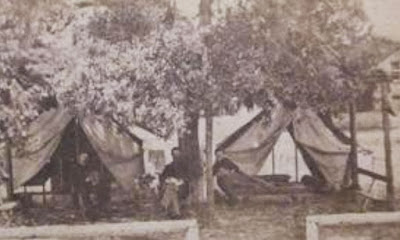 Captain Torrey's camp on Morris Island, South Carolina.
His family held onto this photograph until 1938.
It was recently sold on eBay.

In the war's last weeks they marched from the coastal islands towards Charleston and into South Carolina, capturing local partisans and punishing residents of the state who'd advocated war over any discussion about slavery's abolition. It may be that this quilt in such good condition was a souvenir captured in that last march---too nice to let it burn in one of the torched plantations. 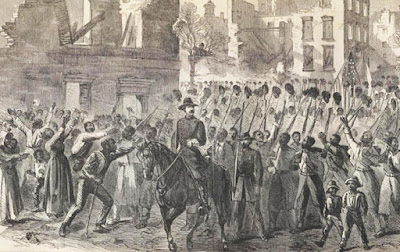 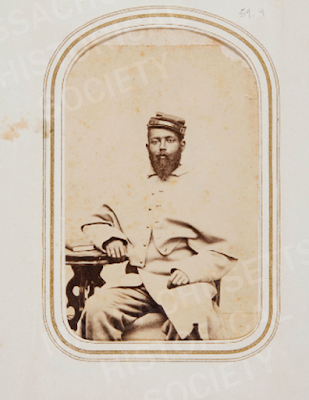 
The album has no photo of Torrey. 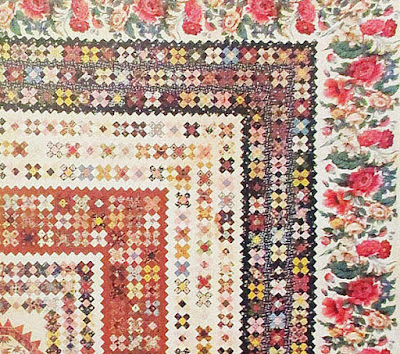 When he joined the Union Army William Haviland Torrey (1840-1916) was a 21-year-old mechanic from Foxboro. After the war he married Azelia Frances Sweetser  (1847-1941) who must have cared for the quilt until her death in her nineties in 1941. Their only daughter Helen died in 1924. The Torrey home at 75 Carpenter Street still stands.

Azelia was described as a milliner and hat designer in a town famous for its straw hat manufactories. Major Torrey was a respected citizen, postmaster and selectman in Foxborough and honored as Deputy Parade Marshal during the the city's Centennial Parade in 1878. 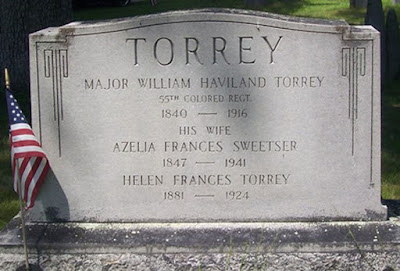 Did he steal the quilt or rescue it?

What a great story about a great quilt - love the border. I believe he rescued the quilt.

I'm not familiar with the Calico & Chintz book (the cheapest Amazon price is $51!) -- where did Patricia Smith get the quilt? It looks as though Torrey and his wife had one child and she did not marry.

Unless it was freely given, it was looted or stolen. I am happy that it was not destroyed and I understand that war time is stressful, but if you take something that is not yours, it is not a rescue.

The floral final border gives the quilt an unexpected exuberance. Fun and interesting post, thanks.

So sad for the southern family that lost this treasure to war theft. Hope they survived the war.

Great story and a beautiful quilt. Rescued or stolen...I am glad it survived.

Is there a closeup of the border chintz anywhere? Looks similar to a border I have on a huge mosaic quilt circa 1830. The corners of the border appear to be mitered ......do you know if they are?

Great story! I'm from Foxboro and my friend lives in William Torrey's house. William, Azelia and their 43 year old daughter, Helen, are all buried in Rock Hill Cemetery in Foxboro. We are all very proud of Major Torrey and the bravery of the Black soldiers under his command. If captured in the South, Black soldiers would be killed, never taken as prisoners of war. The possible theft of a quilt does not compared to such atrocities against other human beings.