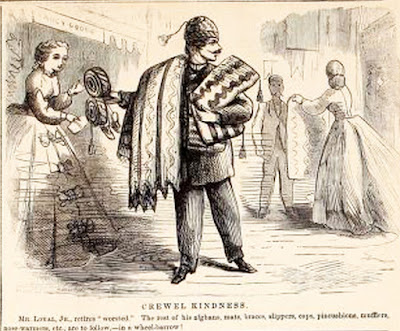 Fair-goer suffering from "Crewel Kindness" loaded down
with afghans, slippers, caps and pincushions---homemade items
sold for the cause.

In January, 1865 the women of Columbia held a fundraising fair for Confederate soldiers' aid in the capitol of South Carolina.

They filled the statehouse with tables and booths set up in the Senate and Hall of Representatives. The tables contained European manufactured goods that had made it through the Union blockades, edibles and, of course, homemade crafts. Thousands of people attended, entering under a banner "A Tribute to Our Sick and Wounded Soldiers." 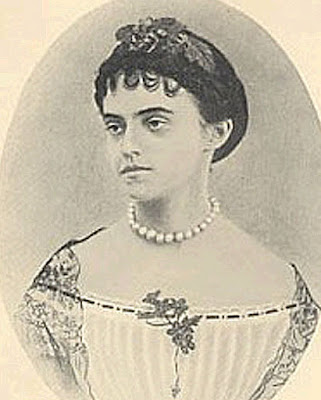 Eighteen-year-old Emma LeConte worked before and during the Bazaar. In the week before, she and her cousin wrote "kiss verses" to sell in exchange for a kiss from the girls at the tables.


"Well, our great bazaar opened last night, and such a jam! I was at the State house helping to arrange the tables until four o'clock so I was thoroughly tired.... The tables or booths are tastefully draped with damask and lace curtains, and elaborately decorated with evergreens. To go in there one would scarce believe it was war times. The tables are loaded with fancy articles - brought through the blockade, or manufactured by the ladies."

In early January, 24-year-old Grace Brown Elmore's home was "Bazaar mad...so many letters to be written, so many tobacco pouches to be made."

A reporter from Edgefield traveled to Columbia for the event, using many column inches in the Advertiser to discuss the women he saw.

"If you saw a lady with a little cap or diamond shaped piece of lace on her head, she was an adorable and wily vendeuse [vendor]; if you saw one without this badge, she was an unofficial member of the wriggling and whirling audience."

Among the unofficial audience was Sallie Lawton in Columbia as a refugee from Sherman's Union Army.  "You would never imagine there was a war in our land, could you have seen, the delicacies of every description on the tables, but the prices were very high." 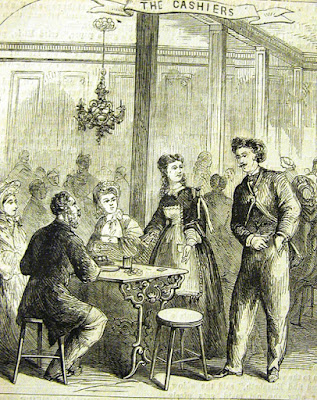 It is indeed strange that festivities continued as Sherman's Army threatened the town. While optimistic Columbians should have been fortifying the city and pessimists packing their belongings, 3,800 people jammed the building on the fair's first day. 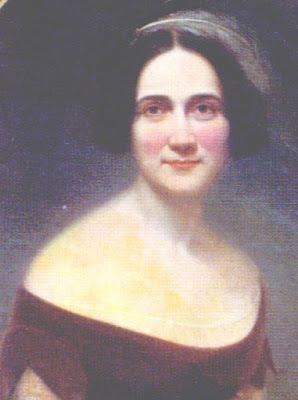 Among the vendeuses at the Bazaar was Mary Chesnut who, as always, saw the irony. The night before the opening she recalled the legend of the Babylonian king who found his doom predicted in an inscription. "The bazaar will be a Belshazzar affair. The handwriting is on the wall. Bad news everywhere." The next day: "The last bazaar lags superfluous."

Emma LeConte soon realized its superfluity. "I had expected to take great interest in the Soldiers' Bazaar but I cannot. It seems like the dance of death.....Who knows what may become of us in ten days!...Yet all this does not rouse us. We seem sunk in an apathy."
"

The Bazaar, scheduled to run for two weeks, closed after four days due to rumors of imminent invasion. A month later Sherman's troops raised a Union flag over the State House. 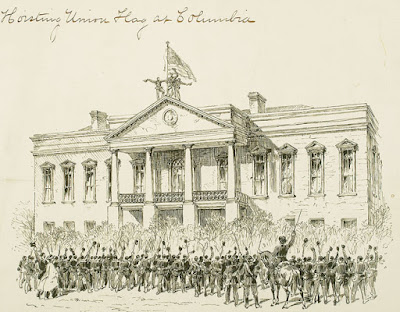 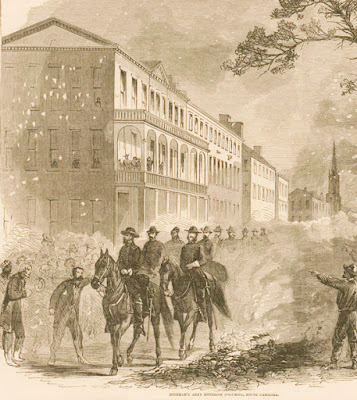 Sherman's troops marching through the city 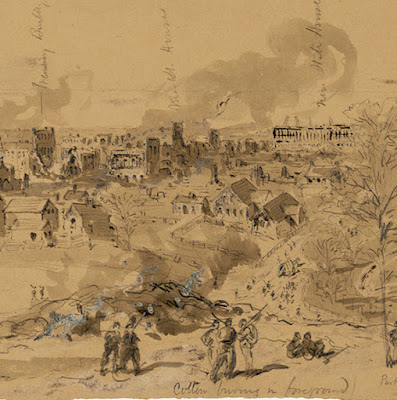 The next day Columbia was in ruins.
Detail of a Waud watercolor.
That night the city burned. The State House is on the right in the photo below of the destruction.

I haven't found any mention of quilts among the "articles rich, rare, tasteful, and endless in variety" for sale at the fair but I did notice that yard goods from England were for sale. European fabrics were also a feature at the pre-war fairs for abolition, temperance and other causes, one more source for the imported prints we see in mid-19th century quilts.

Beverly Gordon in her book Bazaars & Fair Ladies notes that Great Bazaar did raise a good deal of money, but what happened to it is a mystery.

Read the news from the Edgefield Advertiser at Chronicling America from the Library of Congress:

it causes me to wonder what happened to all the stuff that did not sell as well. Only four days for a two week anticipated bazar?

Can you imagine being there at that time?
'The handwriting on the wall', knowing your town was going to be probably
burned to the ground, but trying not to think about it.

Every blocks is so cute, I like how everybody solve the problems along this journey in different ways. My block #3 is still in progress due to many guests I have this month. Hope to finish it before you’ll post next block ; )
ไพ่ออนไลน์