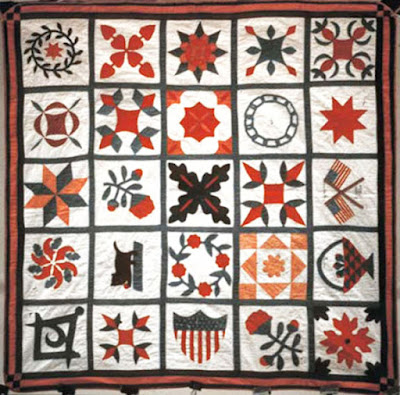 Here's a patriotic sampler I found in the records of the Tennessee
project and the Quilt Index.
I betcha there's a New York connection.

It has at least three blocks that you often see in New York Samplers:

Cats, a single blooming floral and a double hearts block.

Sure enough, as you scroll down in the record you will see one of the blocks is signed
by Anna Eastsche Ithaca

Why so many cats on New York sampler quilts? 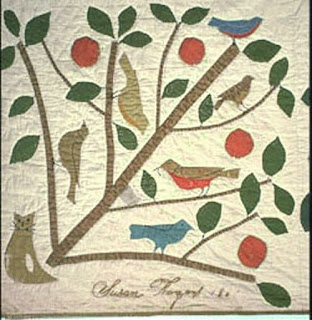 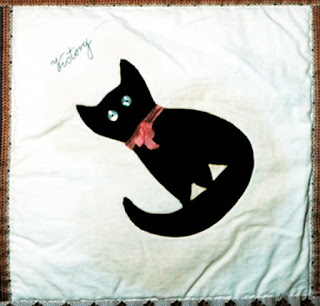 Cat with the word Victory on a quilt from
Tarrytown, New York, associated with an 1864 Sanitary Fair there.

Did the cat stand for the Union?

Perhaps there is a relationship to a common image at the time. Many people were familiar with the Kilkenny Cats, an Irish limerick that was a metaphor for what we'd call a no-win situation. 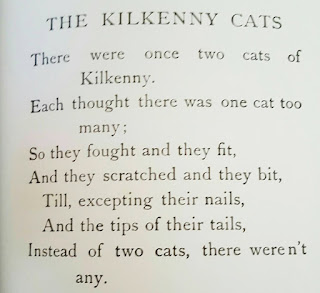 There were once two cats of Kilkenny.
Each thought there was one cat too many;
So they fought...
Instead of two cats there weren't any.

In 1867 General Phil Sheridan wrote General U.S. Grant about his trials in reconstruction Louisiana where the Union party and former secessionists were at odds. "They are now like the Kilkenny Cats, destroying each other," implying that the cats would leave only the tips of each other's tails. 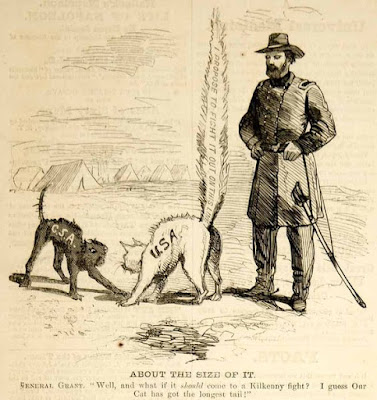 Harper's Weekly cartoon in 1864 with Grant and a long-tailed cat labeled USA.
The larger cat's tail says, "I propose to fight it out on this line."

General Grant was warned by General George Meade that the Confederate Army preparing for battle "would make a Kilkenny cat fight of the affair." Grant, according to Lincoln's secretary John Hay, assured Mead, "Our cat has the longer tail." 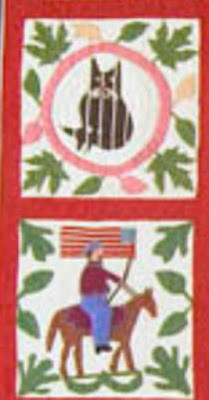 International Quilt Study Center & Museum collection
#2001_011_0001
Striped cat on an 1867 quilt made in Brooklyn by Lucinda Honstain.
Many of the blocks have a war theme.

I don't want to read too much into all these cats in quilts. 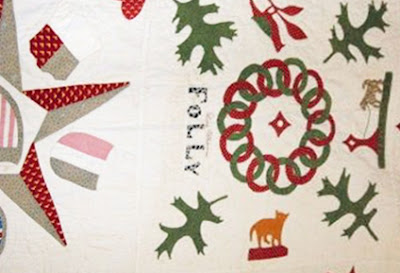 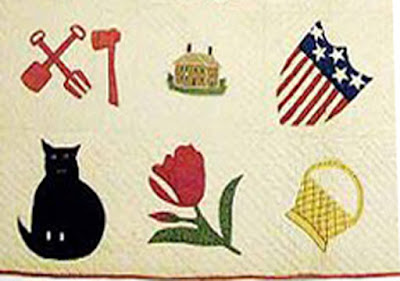 New Yorkers weren't the only quilters who included cats on their
patriotic samplers. This one dated 1867 is attributed to spiritualists in
Willimantic, Connecticut.

Maybe it's just that cats are cute. 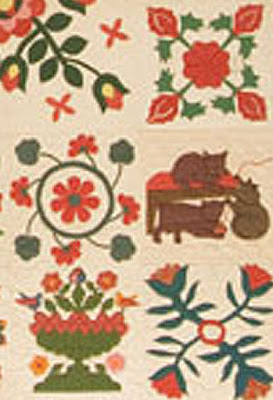 UPDATE: Merikay looked up the records on the sampler at the top of the page, which is in the Tennessee State Museum---purchased at a New York auction because the crossed flags block has the words:

I love the thought of including a cat image on a quilt. I would never have thought of looking for one, but I may just have to place one on the quilts that I make. Interesting read!

This is an interesting post, as always. I learned so much about the history of USA through the quilts you pick. Always so nice to read. Thanks for sharing. ;^)

I may be "out there" but wonder if the fascination with cats has continued with all the cat postings on facebook. They just are so cute.

How interesting. 'Did not know that cats were popular quilt appliques. As always, a very informative post. Thank you so much.

Hope you will find more cats on quilts for us...really enjoyed this entry.

So interesting! I love the Kilkenny cats story.

Love this post! Cat appliques on old quilts, and finding them in old prints, is fun! Wish more fabric designers reproduced the cat/kitten conversationals prints. There is a tiger print used in an antique quilt that I am drooling over but no one has reproduced it in a fabric line yet.