Post War Party in Boston: Quilts from the Freedmen's Schools 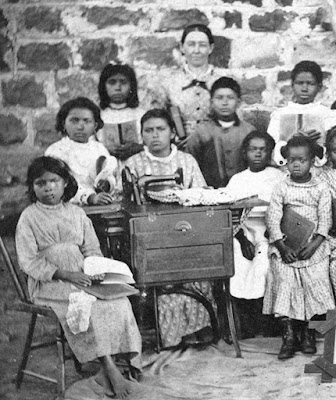 Students and teacher at a Freedmen's School,
late-19th century

"While a grateful nation is welcoming back its soldiers from their victorious battle-fields, it seemed fitting that we should make some thank-offering to our noble veterans returning from their honorable toil in the cause of the freedman." 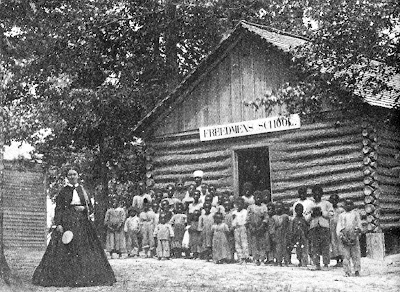 One of the speakers was Harriet Carter of Cambridge:


"The production of a bedquilt made by the little children in a sewing-school at Washington induces Miss Harriet Carter to come forward...The bedquilt was then put up for sale for the benefit of the sewing school. Thirty dollars was bid on the spot; but the purchaser will yield to higher bid and the quilt will remain at our office a short time for inspection and sale." 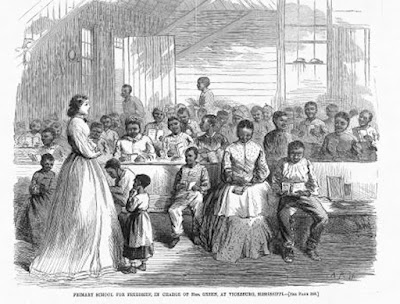 Mrs. Green's class at a Freedmen's School in Vicksburg, Mississippi,
Harper's Weekly.
Dr. John Rapier, Jr., an African-American doctor working at the Freedmen's camps in Washington, described 24-year-old Harriet Carter in one of his letters, noting she was attractive and "as full of learning as an Episcopal minister."

Teachers at the Washington school

It would be nice to know more about Harriet and her pupils' quilt. Records of the various branches of the Freedmen's Bureaus include several references to quilts made by students as part of the sewing curriculum. The finished pieces could be sold as fundraisers, given as gifts or kept as bedding.

The following year Abby S. Simmons at the Washington school sent this account:


"In a barrel of goods sent me from Hartford, there were several small pieces of calico, and I thought it would be a good idea to teach the little girls to sew...The Society [in Poughkeepsie, New York] sent us a large bundle of pieces. I told the children about them, and about the kind ladies who had sent them ...and asked them if they would not like to piece a whole bed-quilt and send it to the ladies. They had already several blocks pieced. I asked them which they would rather do, piece a bed-quilt, and sell it, and buy something for the school, or present it to the ladies. At the last proposal every had was raised..." 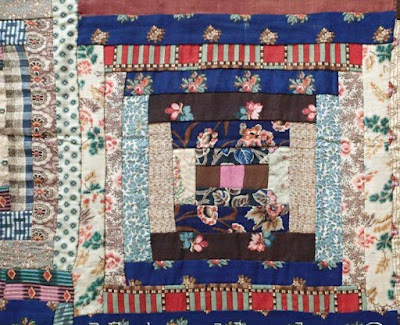 One teacher in Camp Rucker, Virginia, wrote to a newspaper in 1866:


"I should be very thankful for Chintz or Mousline de Laine pieces, that will do to make into patch work, not only to teach the children to sew, but they need quilts badly."

Perhaps she was thinking about using the delaine to make log cabin quilts.

Photo of a school on St. Helena Island,
Georgia and an illustration drawn from it 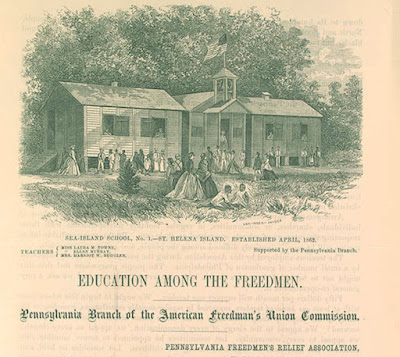 In 1864, the Women's Association of Philadelphia for the Relief of the Freedmen reported receiving "A box containing material for several bed quilts from Ruth A. Shaw, Avoca, Illinois." 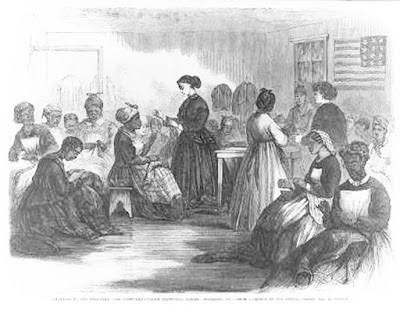 Sewing was also part of the adult curriculum

See a post on another quilt made by the children at a school on Hilton Head Island:
https://civilwarquilts.blogspot.com/2017/12/nine-patch-quilt-on-hilton-head-island.html