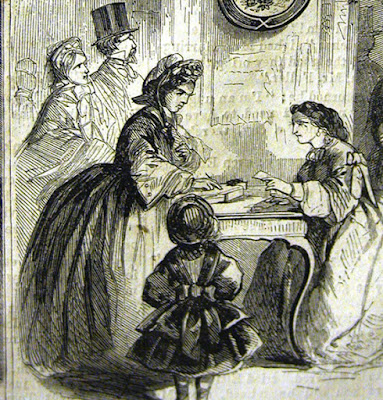 Ladies's fairs were similar in England and the U.S.

A rather odd footnote to the role of women in the American Civil War is the Grand Southern Bazaar in Liverpool, England, held in October, 1864, about six months before war's end. 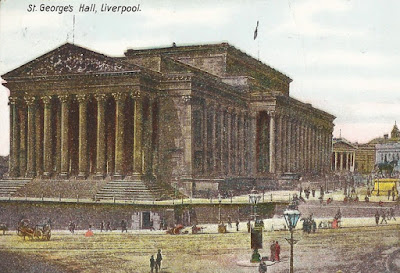 The four-day fundraiser was held in the magnificent St. George's Hall,
which still stands. 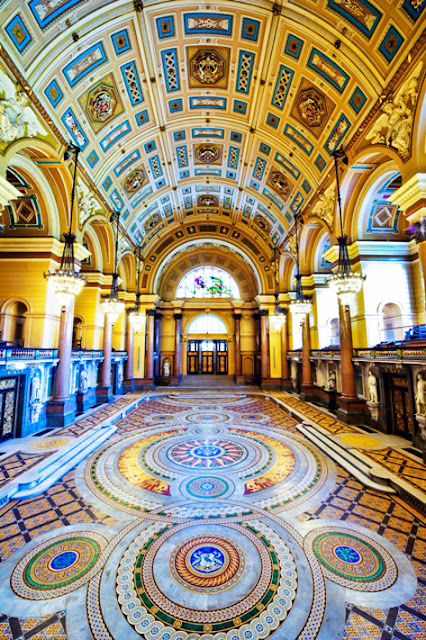 The mosaic floor was lined with booths representing
each of the Confederate states overseen by Southern women
and British friends of the South.

England was officially neutral during our Civil War, but economics dictated the loyalties of many Liverpool capitalists. Cotton linked the Confederacy and the English port. English mills were dependent on American cotton; the Confederate treasury upon English cotton purchases. 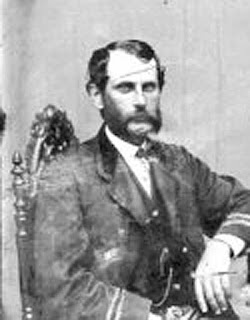 James Dunwoody Bulloch, unofficial
ambassador between the Confederacy and England.

Among the Southern families who relocated to Liverpool during the war: James and Harriott Cross Bulloch (he from Georgia; she from Maryland) and John and Mathilde Deslonde Slidell from Louisiana. 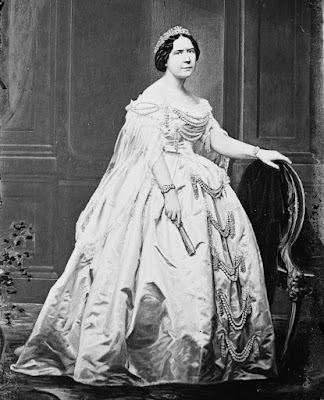 Mathilde Slidell presided at the Mississippi booth with the Countess of Chesterfield; Harriott Bulloch at the Georgia table.

The New York Times reprinted a review of the event:

"The ladies in charge of the different stalls were attired in elegant costumes, each had on a silken scarf on which was inscribed in gilt letters the name of the Southern State within which...the wearer's jurisdiction lay." Also presiding were members of the Southern Club. "The stalls were absolutely crowded, not only with rich and costly articles, but with those of a cheaper and more unpretentious character...." The visitor lauded "the exquisite taste with which the hall was decorated and the fine proportions of the structure itself." 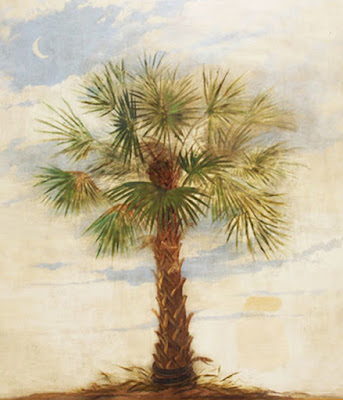 The Southern Club was a Liverpool group that lobbied for the Confederate cause. Leaders were Americans James Spence and Charles Kuhn Prioleau who with their wives were the organizers of  the Grand Southern Fair. American Mary Anne leSerre Spence was in charge of the North Carolina table and  Liverpool native Mary Wright Prioleau worked in the South Carolina booth with Lady Wharncliffe. 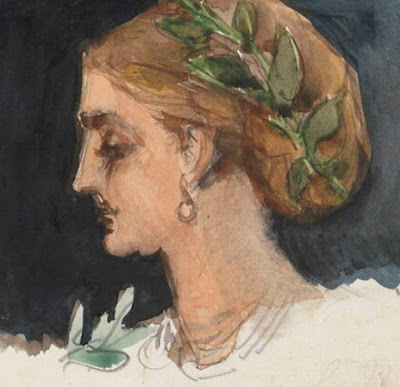 
I was hoping to find mention of patchwork in the booths but the goods seem to have been less homely than conventional women's work. Once you get the aristocracy involved the stakes go up. The reviewer wrote:


"Commencing at the south end of the hall, the first stall on the right hand side is devoted to Florida, and is presided over by Mrs. Cassin and Mrs. Patrick. There is here a very beautiful piece of needlework, consisting of a female figure surrounded by a floral border, the colours being blended with great art. A more elaborate piece of feminine handiwork is the representation of our Saviour paying tribute; and there are several handsome screens and cushions, besides many choice specimens of cutlery from Sheffield and of china from Birmingham."

Most money was raised through auctions rather than direct sales; among the items auctioned: a Shetland pony and a Manx cat. 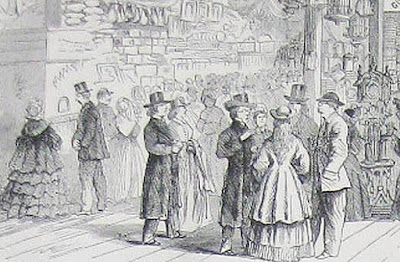 Holding a bazaar to benefit the South was unpopular, considered by many to be Confederate meddling in English politics, but the stated purpose was to raise funds for Confederate Prisoners of War. Who could criticize such a humanitarian undertaking? In just those few days £20,000 in British money was raised for the cause (worth over ten times that today.)

The whole concept posed many problems. How would such a fortune benefit Southerners held in Northern prisons? Were funds to go to the North for food and medicine? The North refused the donation. Britain refused to transfer it. How was the money to be spent? The £20,000 remained in British hands until after the war when it was transferred to New York and then sent to aid former prisoners. 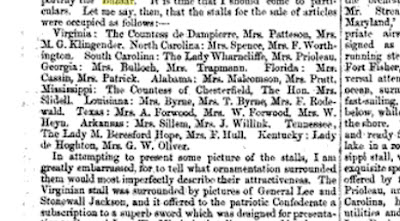 Here is a list of the women and their state booths

And here's another even odder footnote.

Matilde Slidell's daughter Matilde Erlanger, married to a French
confederate sympathizer, proposed a Parisian bazaar selling perfumed
soaps. My French isn't good enough to follow up on this,
but it's fun to imagine.

Read about Liverpool and the American Civil War at the Liverpool Museums website:
http://www.liverpoolmuseums.org.uk/maritime/archive/displays/americancivilwar/index.aspx

Fascinating! An African American friend recently visited the Liverpool museum and she felt they admirably confessed and truthfully illustrated their city and region's activities in support of the Confederacy, slavery in the Southern United States and the slave trade throughout centuries.

The local economy near Liverpool included all the textile industries in and around Manchester where a great deal of cotton had been processed into fabric and printed for export and domestic use before the Civil War embargo significantly diminished the supply of that fiber. Liverpool itself was a shipbuilding center where the ships ordered by the Confederate Navy were constructed, as well as swift blockade runners. This shipbuilding was also a major contributor to the Liverpool economy.

During the era of the international slave trade, Liverpool also had built many of the infamous ships designed to transport slaves chained together below deck from their point of purchase in Africa to their sale in South America, the West Indies and the US. This work continued even after Britain banned the participation of its citizens in the international slave trade and later abolished slavery in all of its colonies.

Throughout the War Britain was courted by the South through diplomacy and trade to enter the War officially on the Confederate side and it nearly succeeded because of these strong economic ties. Lincoln and Secretary of State Seward prevented Britain from doing so near the end of the War by threatening that if that was Britain's choice the North would deem it an Act of War and with its international allies would undertake reprisals at sea. At that point, momentum on the battlefield was turning to favor the North and Britain also had to weigh the eventual, post-War cost of siding against the victor in War if, as seemed more and more likely, the North prevailed.

As we know, Britain ultimately refrained from officially joining with the Confederacy. It would be very interesting to read the history of British-Confederate relations during the Civil War from the British point of view.

This is so interesting to read as I sit here in Liverpool!

19 Abercromby Square is now part of the University of Liverpool and the painting was still there when I was last in the building a few years ago.