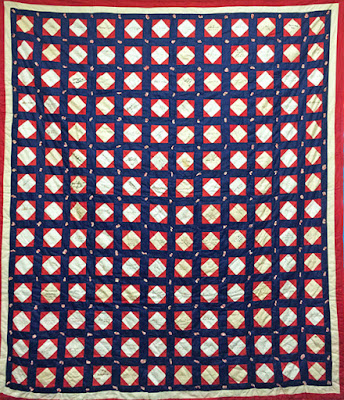 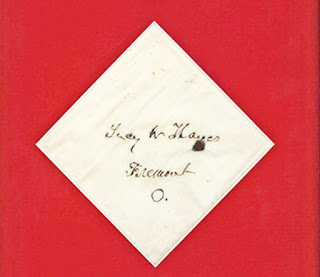 Lucy Hayes's signature and her husband's are framed
in an accompanying piece. 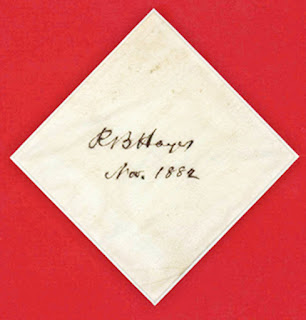 Rutherford B. Hayes was President from 1877 to 1881, so when the Hayeses signed the squares
he was former President Hayes. He was followed by Chester Arthur, who served from 1881-1885 and died in 1886. Arthur also signed a square. 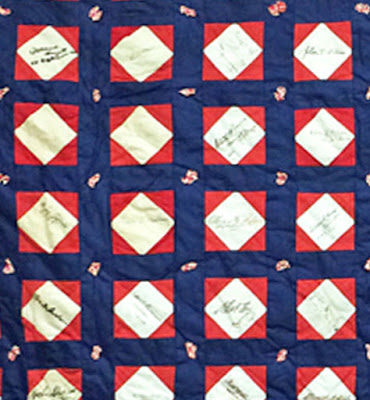 This quilt was documented in the Wisconsin project, when it was noted: "The quilt was found in an attic in Boston, and was purchased from an antique dealer in Connecticut. The signatures on the quilt are autographs of prominent persons in the Boston area and includes Presidents Arthur and Hayes."

Three signatures that may have
arrived too late???

The celebrity quilt was a fashion in the last part of the 19th-century. It appears the autograph collector sent white silk squares to famous people and then framed each with red triangles, set the blocks with blue sashing and tied the silk quilt with red and white yarn. 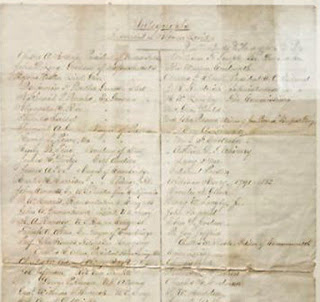 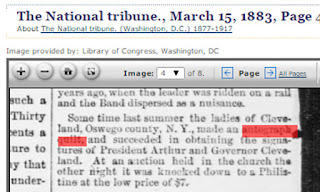 In 1883, the ladies of Cleveland, New York "succeeded in obtaining the signature of President
Arthur and Governor [Grover] Cleveland. At an auction held in the church the other night it was knocked down to a Philistine at the low price of $7."

This is not the same quilt, Celebrity quilts and soldiers' quilts were a trend in the 1870s and '80s.

The quilt is now for sale at Lion Heart Autographs for about $65 per signature.

If you are looking for a New England Civil War veteran you might find his name on the list.
Posted by Barbara Brackman at 6:00 AM


Wow! That's an impressive amount of signatures! That must have taken a lot of autograph hunting - even if it was done by post!