A Silk Quilt for President Lincoln 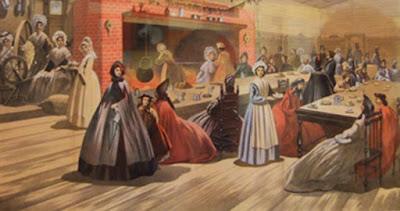 New England Kitchen at the Brooklyn Sanitary Fair in 1864

Right before the last Christmas of the Civil War the women of Chicago put on a fundraising fair for the Union cause. "The New England Farm House Festival" was a three-day event with an old-fashioned theme. Nostalgia for Colonial days was a feature of several fairs that raised money for the Sanitary Commission. 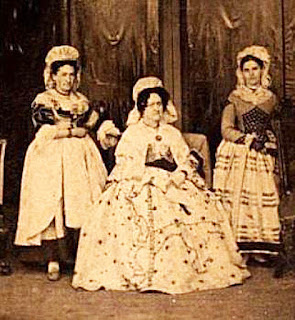 The Chicago Tribune gave the fair much attention:

"One would hardly have supposed that such a variety of  'ye ancient household goods' which graced the persons, the parlors and kitchens of the generations which have gone before, could have been found in this far of Western city." (or whatever it was they were trying to say.)

The Fair was held in Bryan Hall on Clark between
Randolph & Washington, destroyed in the fire of 1871.

The Tribune mentioned a "silk quilt presented to President Lincoln" 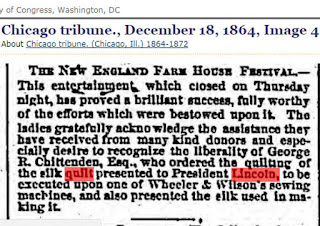 "The New England Farm House Festival---This entertainment...has proved a brilliant success...The ladies gratefully acknowledge the assistance they have received... especially...of George R. Chittenden, Esq., who ordered the quilting of the silk quilt presented to President Lincoln, to be executed upon one of Wheeler & Wilson's sewing machines, and also presented the silk used in making it.
December 18, 1864.

George Redfield Chittenden (1833-1881) was Chicago's dealer in Wheeler & Wilson sewing machines. We can imagine that the gift for the President was a good marketing tool. 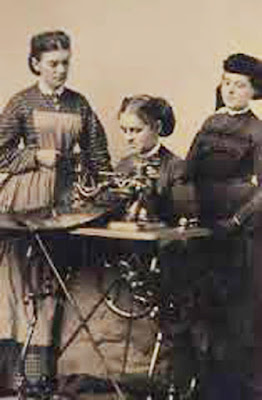 Fairs of all kinds had operators demonstrating
modern technology. 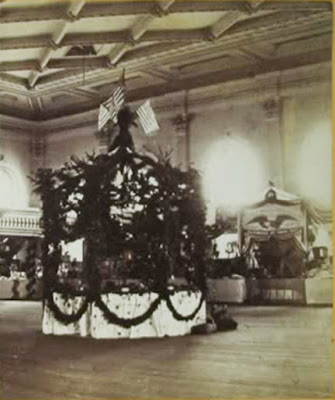 On the back wall under the eagle: a Wheeler & Wilson fair booth

One more Lincoln quilt to find.

Where to begin? Perhaps a presentation ceremony would describe it. But Lincoln did not actually visit the fair. He spent December in Washington so if the silk quilt ever reached him (he was shot 5 months later) it would have been delivered to the White House without much fanfare or newspaper coverage.

Poking around the web looking for "Lincoln silk quilt" made me re-think my idea of what I was looking for. The newspaper called it a silk quilt, not a silk bedquilt. 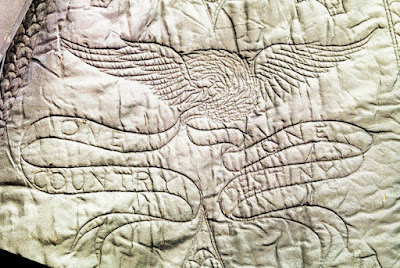 What if they were talking about a quilted garment?

The Ford's Theatre National Historic Site is a National Park Service museum in the building where Lincoln was shot. In the collection is a coat, which tradition says Lincoln wore on the fateful night. A caption for the photo: 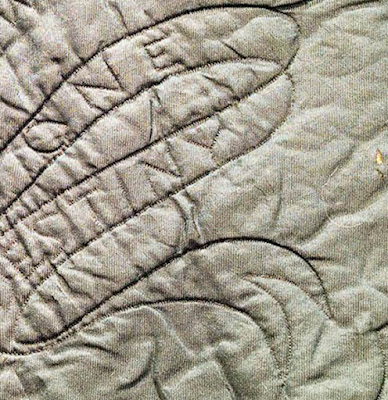 "The hand-embroidered lapel featured an eagle carrying a banner reading 'One Country, One Destiny.' The phrase comes from an 1837 speech given by one of Lincoln’s role models, Senator Daniel Webster."

It is immediately obvious that the caption is wrong. We are looking not at the coat's lapel but at its lining. The silk is not embroidered it's quilted. And it looks to be machine quilted on a chain stitch machine. 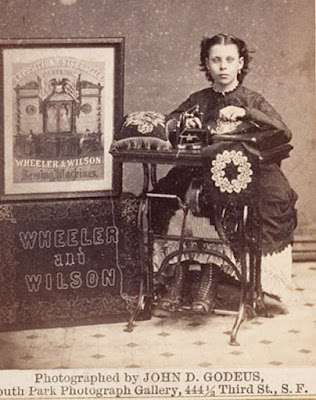 So easy, a child can sew on a Wheeler & Wilson

Denise Winter's web page has a better description, photos and history of the coat at Ford's Theatre. The coat and silk lining are black. The coat was a gift [or purchased] for Lincoln's second inauguration in March, 1865 from Brooks Brothers, the men's clothing manufacturer in New York City.

"The original overcoat is a double-breasted coat made of the fine wool with silk edging around the outside of the collar, cuffs and pockets. Almost the entire inside of the coat is hand-quilted. The right and left interior front panels feature the design of an eagle symbol holding two streamers with the words 'One Country, One Destiny'. This amazingly detailed coat also resides at the Ford Theatre Museum but is in poor condition having been ravaged over the years by souvenir collectors who have removed a section of the upper shoulder area bit by bit." 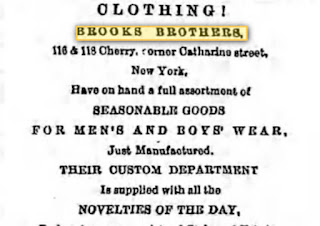 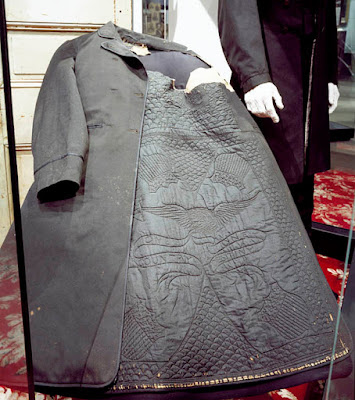 The original on display. The museum now displays a
copy.

Although all the captions indicate the quilting was done by hand I am guessing they are wrong.
I found several secondary references to the quilter who did the work for Brooks Brothers. Her name was Agnes Breckenridge and supposedly a story appeared in the New York Times, in which she said  the quilting took her 2 days (10 hours of work). That time frame is suspect--- That much quilting in ten hours? Even on a machine. Certainly not by hand. [I couldn't find the reference to Agnes in the Times archives.]


So I am wondering if George Chittenden made a similar garment to display at the New England Farm House Festival? There's one less bedquilt to track.

Hooray - I was so happy to read about Lincolns coat. I have known about it for some time and not seen a really photo of it.
Thank you for link to web page to see the original.
I agree with your observations. I have to chuckle at the "don't attempt to save a copy....." it's on the web......anyone, even I can save it and did.

thank you for a most interesting article!