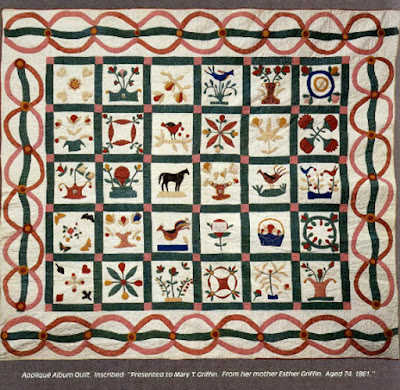 1861, Esther Griffin for her daughter Mary

It's time to think about next year's Block of the Month with a Civil War theme. I think it should be pieced as I wanted the piecers to have their year without the A word. So my first thought was: 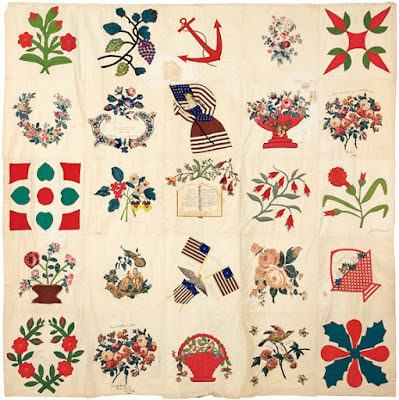 1862, From the collection of the American Museum in Britain

That sounds like a good idea but it wasn't.  I had to recalculate. 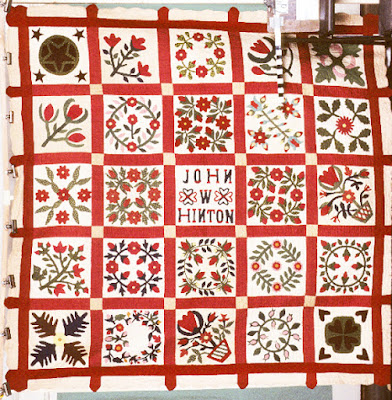 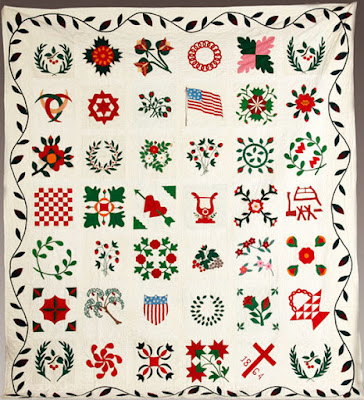 Above the pieced blocks---a checkerboard, a basket & a Cleveland tulip variation---and the last two have applique.

Quilters apparently did not contribute many pieced blocks to album/samplers dated 1855-1865.
This in itself is a style discovery.

By the late 1850s album samplers were composed primarily of applique blocks. 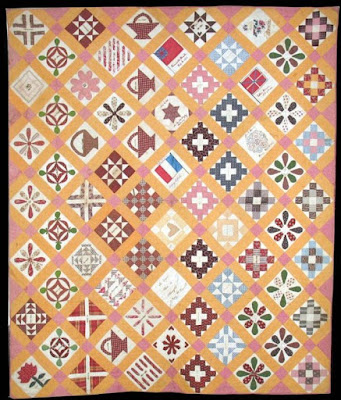 And even those that had quite a few pieced blocks showed little variety in the pieced blocks: album blocks like chimney sweeps, stars and baskets, It would be a dull year.

I'll think of some other source for pieced blocks for 2018. And we'll do applique in 2019. At least now I know it would be historically accurate. 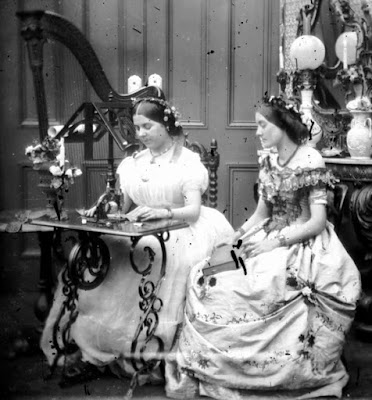 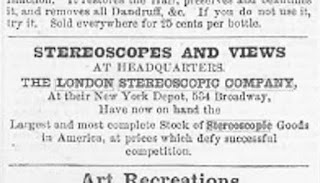 I love the Esther Griffin quilt. There is so much variety. I'd love to replicate that one. The picture of the two sisters sewing looks like the most elegant sewing duo ever. I hope they had someone to pull off all the loose threads from those pristine dresses - ha!

My theory about applique samplers: you see a beautiful applique pattern and you want to make a quilt of it. You do the first block, and that's so difficult and time-consuming, you don't want to make another one. This process results in lots of one-off applique blocks for samplers and the center of crib quilts. Applique is easier for some folks than others.

Have you considered the Jane A Stickle quilt? I has lots of pieced blocks.

I love the Esther Griffin quilt! I hope it can be a choice some year. The blocks are so wonderfully folky, it would be great fun.

Chris. I have never considered the Jane Stickle quilt. My attention span is too short!!!
There must be a thousand blocks in that. But you are right. It is pieced.

Some of the blocks in the quilt for Robert Wilson remind me of blocks in the 1857 quilt that Sentimental Stitches is offering free each month. That has been a fun and challenging journey that began Jan 2016. Would love to participate in another one like that.

I am surprised! I wonder if sitting around waiting for letters from the war affected that at all. Of course, 1855 was before the war, but I wonder - probably no way to do a sociological study now! Or maybe only smaller pieces of fabric were accessible, so appliqué worked best?

Fashion most likely to be the driving factor.

Looking forward to next year ... applique is a challenge for me. Sigh.