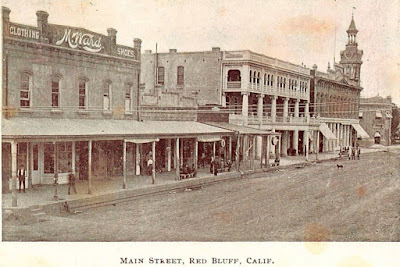 In 1915 the town of Red Bluff, in northern California, celebrated April 10th as the "Anniversary of Lee's Surrender" the end of the Civil War. 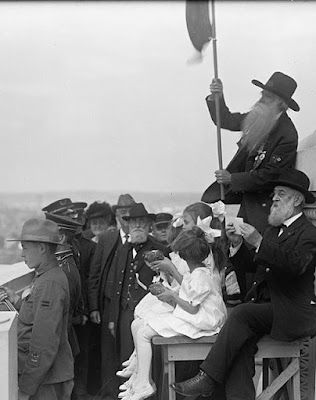 An elaborate 1915 veteran's ceremony in Washington, D.C.
The children are releasing doves of peace.
Library of Congress photo.
In Red Bluff:

"Some relics were presented, the most interesting being a Jeff Davis quilt which was captured during Sherman’s march and was given by the captor to Mrs. Jonathan Stark of  this city. The quilt, or rather a cover for a quilt, Is in the shape of the Stars and Bars. In every blue field is a circle of stars inside which are sewn letters making the word 'South.' On all the white stripes are letters sewn making the word, 'Jeff D'.  It is quite an interesting relic."

Mrs. Stark was probably Sarah Catherine Dudderer Stark,  born in Missouri on November 1, 1839,
died in Red Bluff April 7, 1921. We'd probably recognize that quilt if we came across it. The description is quite clear.

Here's the rest of the newspaper story:

"CELEBRATE THE ANNIVERSARY OF LEE’S SURRENDER
As arranged the old soldiers and the Ladies of the Westlake Circle were present yesterday at the city schools commemorating the fiftieth anniversary of the surrender of General Lee. At the Monroe school a delegation of the veterans spoke to the children. About the same time the ladies met at Mrs. B. C. Foster’s and marched in a body to the Lincoln school with their colors carried by Mrs. Hickman and Mrs Smart. The four lower grades were visited first and short talks given by the visitors. After the upper grades assembled in front of the school and gave the flag salute, then preceded by the veterans they marched to the hall. The school band played several selections during the program, the school under the direction of Miss White sang patriotic songs, and several of the visitors spoke. Among these were Messrs Nealey, Smart, Christian, Burnett and Knapp; Mrs. Hickman and Mrs. Milburn. The addresses were well received by the younger generation. Rev. Rufus Keyser closed the program by a strong appeal for peace." 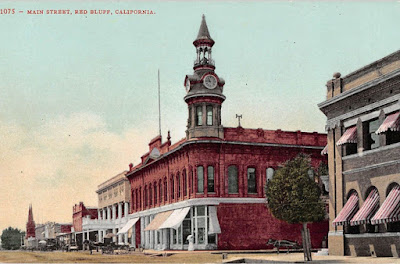 And a little genealogy on the Stark family from FindAGrave

There is only one white Bar on the Stars and Bars So it would have had the letters JEFF D positioned on it and the only blue was the left upper square and it had a circle of Stars and the word SOUTH would have been positioned within the Circle of Stars??
There is one short Red Bar and the bottom Red long bar.
I am thinking of trying to get a hold of relatives still living to see if they still have the quilt top so I am just trying to verify what you know for sure before I ask others.