Sheriff Jones Loses a Quilt in the Kansas Troubles 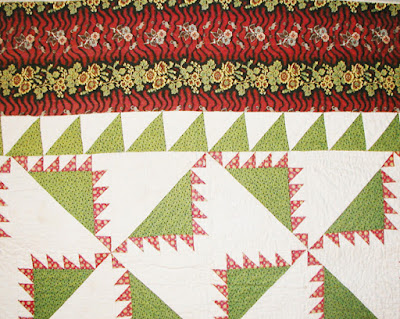 A "Kansas Troubles" pattern from the 1840s or '50s.
Collection of the Helen F. Spencer Museum of Art
Could that name for this pattern be as old as the mid 1850s when
the Kansas Territory was full of troubles. 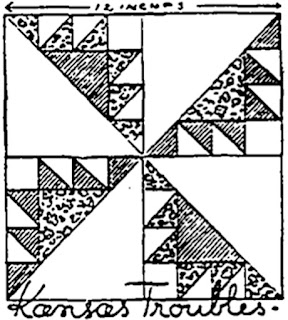 Kansas Troubles: Name from the
Nancy Page syndicated newspaper column in the 1930s 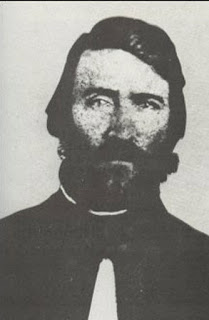 Samuel Jones was the Sheriff of Douglas County, Kansas, from mid-1855 to early 1857. He's one of our hometown villains in Lawrence, a Border Ruffian who lived in Missouri but established a bogus residence in the Kansas Territory to influence the question of whether we'd become a slave state or a free state. Jones, born in Virginia, was heavily invested in the concept of a slave state.

Samuel Jones established a pig farm in Douglas County and was appointed Sheriff by the pro-slavery territorial governor. While Sheriff he helped Missourians burn several businesses in the town of Lawrence, including the newspaper.

In the fall of 1855, while he was "on military duty in Lawrence," his livestock disappeared, "stolen, lost, and wholly destroyed to him by parties to him unknown." The thieves also stripped his cabin of household goods, his sacks of beans, a coffee mill and quilt "worth $5 or $6," according to neighbor Elizabeth Parks. Also missing: "one piece calico worth $1.25."

Four years later Sam Jones petitioned the territorial government to reimburse him for claims of $179.10 for his losses during what was called the Wakarusa War. By 1859 free-state men were in the ascendancy and Jones had resigned as Sheriff and moved to New Mexico where he'd been appointed collector of customs. He and his wife lived near Mesilla where he practiced law and land speculation.

Jones was awarded $139.15, less than he'd requested. "The proof of the existence or loss of portions of the property claimed as lost is meagre and unsatisfactory."

Soon after Fort Sumter Jones was among a group of Confederate sympathizers who established a short-lived Confederate Territory of Arizona with Mesilla as it's capital. He was Marshall of the seceding area made up of parts of the New Mexico and Arizona territories. He died sometime after the 1880 census in Mesilla, probably about 1885. 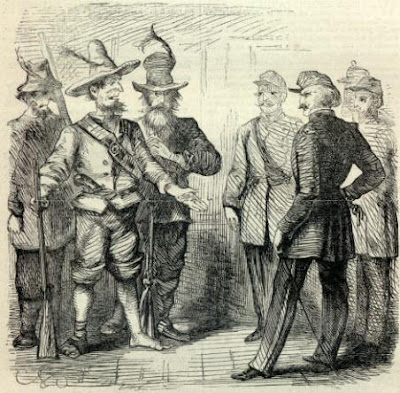 How we view the Border Ruffians in Lawrence

It's hard for a resident of Larryville to sympathize with Sam Jones over the loss of his shoats or his quilt, but I bet his wife Mary C. Jones, living in Westport, Missouri during the Kansas Troubles, was not pleased when she heard about her Virginia keepsake. 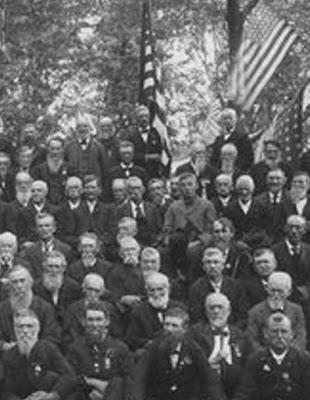 Don't even get these guys at a GAR Union reunion in Lawrence
started about Sheriff Jones.

Many tales survive of quilts stolen by raiding soldiers during the Civil War. In Kansas we think of the Wakarusa War in which Jones lost a quilt as the first battle in the Civil War. Jones's claim for reimbursement is evidence of how wide spread the quilt-napping was. 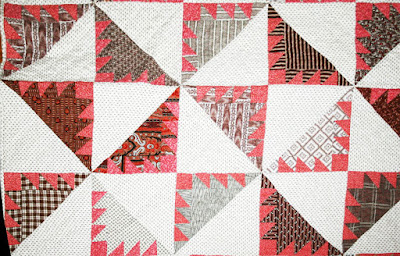 Kansas Troubles variation from about 1890

Next time you see a quilt in the pattern Kansas Troubles, remember that period of civil unrest, which was national news in the 1850s but is now forgotten by most (except for us residents of Lawrence, Kansas.)

See more about the Kansas Troubles with a pattern here:
http://civilwarquilts.blogspot.com/2011/01/5-kansas-troubles.html

To see more of the Spencer Museum's quilt go to this link and search for the words Kansas Troubles.
https://www.spencerart.ku.edu/collection 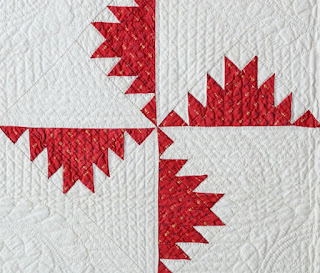 Stella Rubin has a Pennsylvania antique for sale.
https://www.1stdibs.com/furniture/folk-art/quilts/kansas-troubles-quilt/id-f_629907/

Great post! I never heard of the Wakarusa War. Maybe my ancestors were involved. . . . I'll have to look into it.

It's always sad to hear of a nice quilt that was a victim of warfare;-)

That Stella Rubin quilt is kind of a funky one, isn't it? But I love this block, it's been on my to do list since I started quilting! Great story.

I did know that Kansas was 'key', but did not know the name of the War. I'm very much enjoying all your history lessons. I've checked one of your books out of the library too. I've spent my entire life on the West Coast. My next trip (who knows when that will be) to the East Coast will be much more interesting!

He aounded like a misreable person.. and thankfully his quilt was stolen!!! Services him right.
We have the Appalachian Hisotry Museum in Norris TN... on display is a MURDER quilt!!!!

Interesting bit of history. Always so many different adventures and personalities involved in any event.