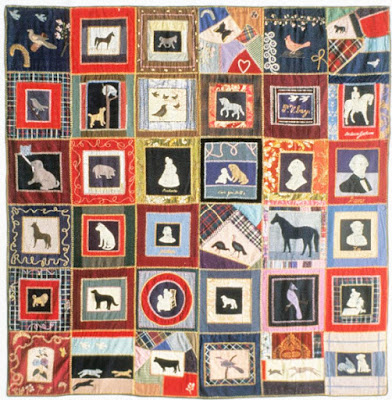 Embroidered wool quilt by Pocahontas Virginia Gay,
(1831-1922) Virginia.
Estimated date after 1901-before 1922
Collection of the National Museum of American History, the Smithsonian

Last week I showed a Union Crazy Quilt. This week one with Southern sympathies. It's a little bit crazy but probably could better be defined as an embroidered and appliqued quilt.

Ms. Gay was descended from Pocahontas of Virginia's Powhattan tribe (1595?-1616) who famously married English colonist John Rolfe. "Aunt Poco" and her parents must have been proud of that Virginia heritage. She also left no doubt of her loyalty to the Lost Cause of the Confederacy with her portrait of Confederate President Jefferson Davis in her early-20th-century quilt.. 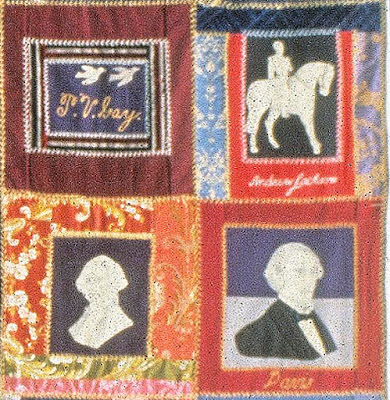 
"Pocahontas based her motifs on popular illustrations of sentimental vignettes and Southern heroes, as well as the Victor dog trademark adopted in 1901 by the Victor Talking Machine Company. Proud to be a seventh-generation descendant of Pocahontas and John Rolfe, she included a likeness of the Indian princess as she appears in a 17th-century engraving frequently reproduced in genealogies.Pocahontas Gay, or “Aunt Poca” as she was known to family, was born in Virginia on September 5, 1831. She was the daughter of Neil Buchanan Gay and his wife Martha Talley. She never married and lived at Mill Farm in Fluvanna County, Va. She died on October 14,1922." 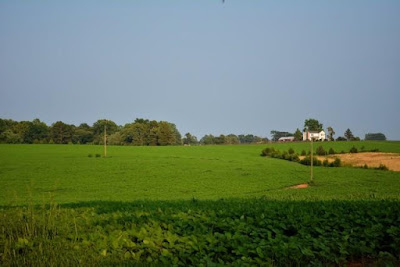 A farm in Fluvanna County.

Pocahontas Gay left a little bit of a paper trail, indicating she did not spend all her life at the family farm. In 1897 a Richmond newspaper printed an article about a board meeting of the Virginia State Hospital for the Deaf and Blind at Staunton. 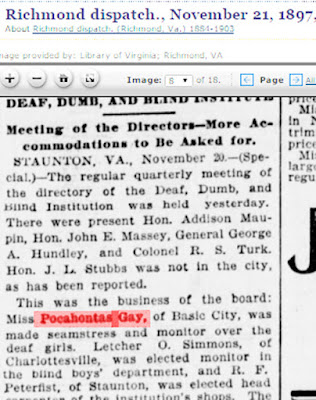 "Miss Pocahontas Gay, of Basic City, was made seamstress and monitor over the deaf girls." 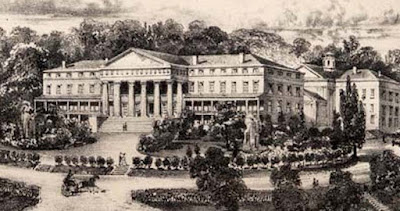 We can assume she was living in the Staunton area while she taught sewing at the school. She would have been in her late sixties then. The story indicates she resided in Basic City, part of Waynesboro/Staunton. 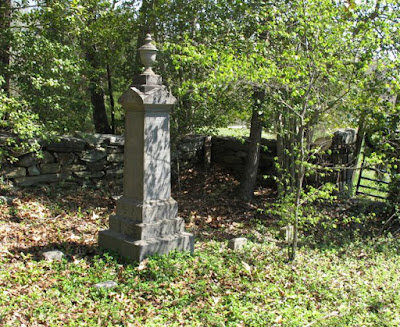 When she died in 1922 at the age of 92 her obituary said she'd been living in Richmond and was buried at the Gay Cemetery on the family's Mill Farm near Fork Union. 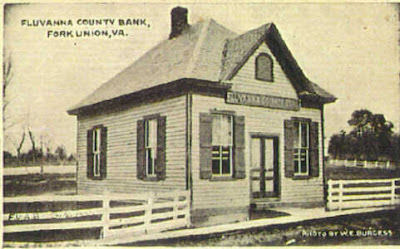 The Fork Union Bank in the early 20th century. 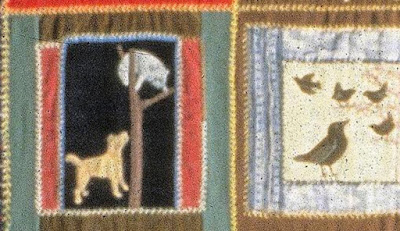 Another detail of the quilt shows a dog treeing a raccoon.
Political imagery or just local sport?
Posted by Barbara Brackman at 6:00 AM

Perfect! I love being a very gay aunt myself to a worthless nephew and his two horrid little sisters. Family is always such fun. Husband Wonderful agrees with me.

Thank you for sharing this. All these locations are near and dear to my heart and child and early adult life. I'm fairly certain the treed racoon is a local staple occurrence and not a political sentiment.