Quilts Buried with the Silver 1 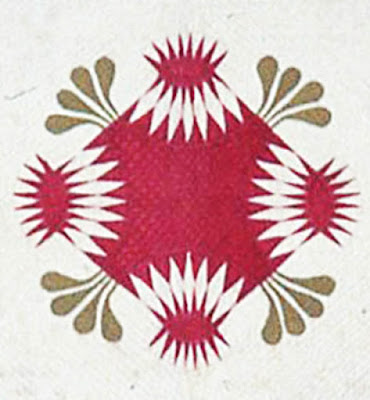 Whig's Defeat or Missouri Beauty.
The Arizona Quilt Project recorded this quilt's family names and story.
It was kept in a tree during Civil War battles to keep marauding soldiers from
stealing it. 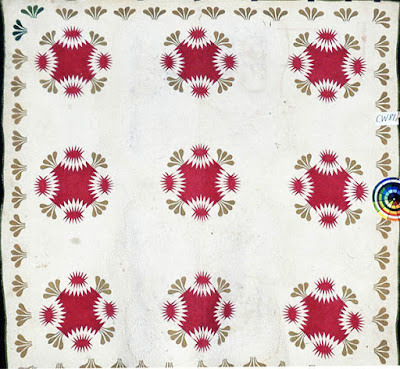 Quilt books have told us stories about quilts being buried, hidden and
stashed away during the Civil War ever since people have been writing quilt books. 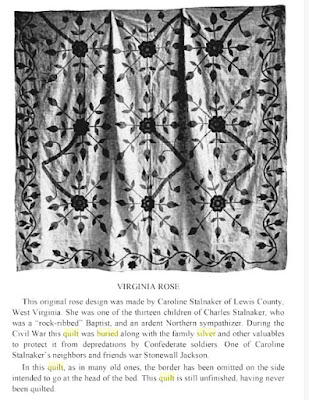 Marie Webster's 1915 book showed an applique Virginia Rose "buried along with family silver and other valuables to protect it from depredations by...soldiers." 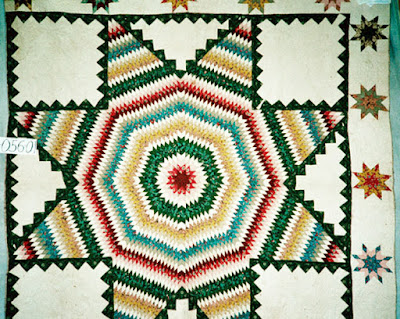 The New Jersey project saw a quilt from Georgia
that came with the story that it had been buried there.
Most of these quilt pictures are from the Quilt Index.
I did a search for words like "buried", "hidden" and "Civil War." 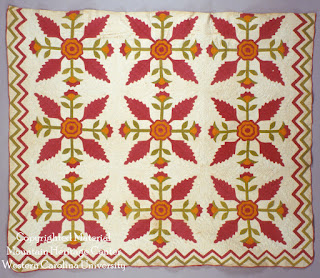 "Some of the information is family lore through our grandmother and some is from histories developed by various family members. The quilt supposedly was buried during the Civil War to keep it safe from Federal troops, probably stationed in east Tennessee. Another version has it that the family silver was wrapped in the quilt and buried to protect it from theft by the troops."

Often these are exceptional quilts, the family's best quilt. 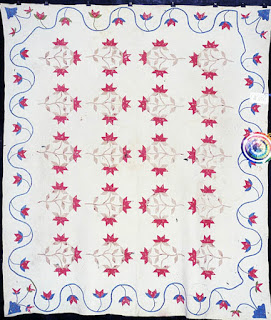 Quilt by Adaline Green, the Arizona Project:
Hidden in a hollow log.

And often the quilts are damaged---with holes, fading
or stains. 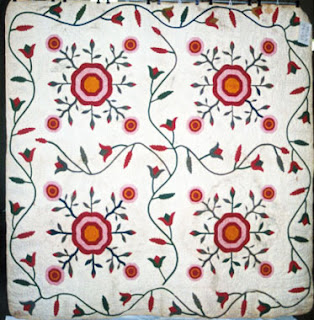 Quilt by Mary Caroline Markett from the Michigan project.
The silver was wrapped in the quilt and all were buried in an iron pot. 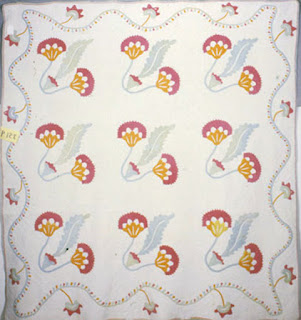 The Kentucky project documented this faded quilt, called Missouri Belle by the family, with the story that it was hidden in a haystack. 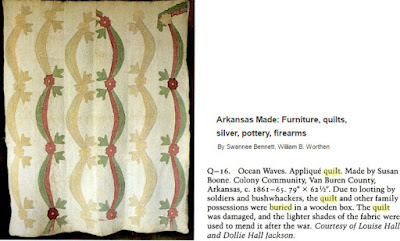 An unusual Arkansas quilt made of six swag borders looks to have been stitched of the end-of-the-19th-century solid colors that were so prone to fading to a dun-colored tan. The family story was more elaborate:

"Due to looting by soldiers and bushwhackers, the quilt and other family possessions were buried in a wooden box. The quilt was damaged, and the lighter shades of the fabric were used to mend it after the war."

That family myth is unlikely. A more accurate caption for the quilt above might be:

This post-Civil-War quilt was made from both fugitive and color-fast reds and greens. The applique colored with natural dyes like Turkey red retained a good deal of their color. The reds and greens derived from the new and experimental synthetic dyes lost most of their color and faded to tan.

But we are dealing with myth here. The stories of the quilts being buried and damaged tell us a lot about how families passed on stories of the Civil War. Sometimes accurate history is not the point.

I've always wondered how they kept the soil, rain and ground water from staining those buried quilts in the days without plastic and silicon caulk, especially if they were buried for years. Even if they had a wooden box handy, it doesn't seem like much protection. This makes me very skeptical of these stories. The quilts might have been hidden, but were they really buried in the ground?

That top quilt with what looks like 4 cockleburs around a center shape is really something!

Suzanne, they had oiled cloth back then they used for water-proofing. I doubt the quilts were wrapped directly in it, but perhaps it they were wrapped first in sheeting, then something like a box and/or a large oiled cloth that had been cured so it didn't seep oil then tied tightly with rope, it could have survived in fairly decent condition. My guess the top was folded inward, so who knows what the backing looks like.

I find it interesting that many families felt they had a quilt worth hiding, either for sentimental reasons or otherwise. Even if it was for wrapping the silver, they still picked a good quilt to wrap in, not a utility version.

There are many tales of women watching while their mothers and grandmothers best quilts were carried off by soldiers, or torn apart to use as packing, bandages, groundcloths. I'd rather hide my best quilt than watch it suffer that fate.

if it was for wrapping the silver, they still picked a good quilt to wrap in, not a utility version.We have a great collection of African fabrics. Good quality at lowest price. For whole sell price Visit us hope you guys love them.
Sequin Fabrics, Whole sell Sequin
Meba Wo Abrokyere