Quaker Community and a Kidnapped Family 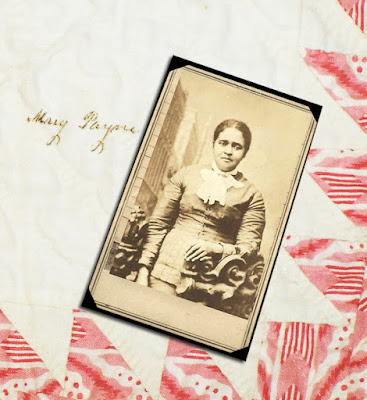 Quilts are significant in their link to the past. They engage families with their own history. They also draw an audience to a historical narrative that might otherwise be ignored. One surviving Pennsylvania quilt has those qualities, telling the story of a family of freed slaves kidnapped by ruffians, returned to slavery in Virginia and freed again through the court of law. 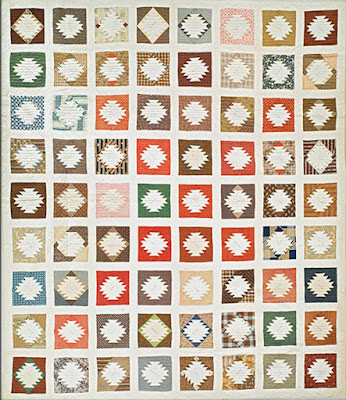 The quilt has links to the Payne family's ordeal and the Quakers who offered them aid.

In 1843 Catherine (Kitty) Payne (1816 - about 1850), a 27-year-old slave in Virginia owned by the Maddox family, was the widow of free man Robert Payne. Mary Maddox, her owner, moved to Pennsylvania with several of her slaves, freeing Mary and her four children (Eliza, Mary, James Arthur and George) that year. Kitty and her family settled on Bear Mountain in Adams County. 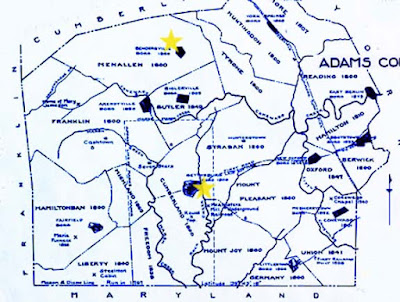 Kitty lived in northern Adams County, Pennsylvania,
the yellow star at the top. Gettysburg (center star)
is the largest city. Maryland along the southern border
was a slave state.

Samuel Maddox Jr. objected to his Aunt Mary's actions in depriving him of what he saw as an inheritance. He and a group of men headed by professional slave-napper Thomas Finnegan of Maryland captured Kitty on July 24, 1845, and returned them to Virginia. The family of four (the baby had died) was jailed---or kept under house arrest for protection--- for a year, depending on the story.

Finnegan's ventures into Pennsylvania to capture free blacks and runaways infuriated the antislavery Quakers who assisted the family with legal help and other aid before and after their Virginia trial. 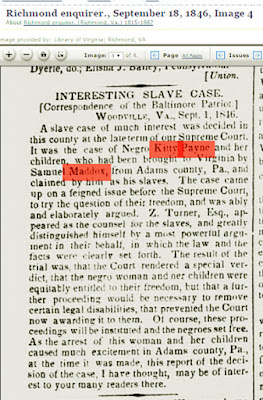 The Baltimore Patriot printed an account of the Payne case resolution, which was copied by
several other newspapers in September, 1846. Surprisingly the Virginia court ruled that Kitty and "her children were equitably entitled to their freedom...the negroes were set free.....the arrest of this woman and her children caused much excitement in Adams county, Pa., at the time it was made...."

The family returned to Menallen Township in Adams County and the children were placed with Quaker families. Mary Payne, by that time about 6 years old, was raised in the John Wright home.

The tale of Kitty Payne and her children being beaten, bound, gagged and dragged back to Virginia resonated in Adams County. The story has been told many times by the family and the neighbors over the years. At some point quilt blocks were stitched and inked. Mary Payne signed one as did Jane Wright, her foster sister, and several other of the Quakers who helped the family.

The quilt has been linked to the Payne kidnapping only recently - in the past decade, I believe, by Kitty's great-granddaughter Sandy Kasabuske. I haven't noticed any dates inscribed on the blocks but I would guess the blocks were made in the years 1840-1860 by the fabrics. 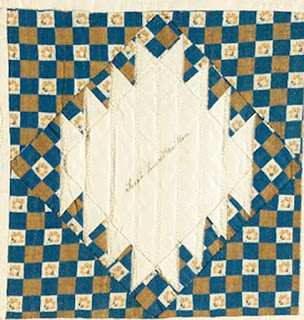 Several of them are done in the fashionable blue
and buff color scheme of the 1840-1860 years. 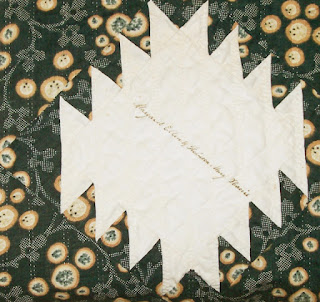 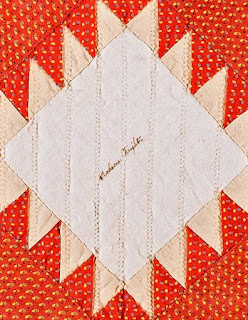 Rebecca Wright's block
Others are pieced of Turkey red prints, another album fad in the 1840s and '50s. 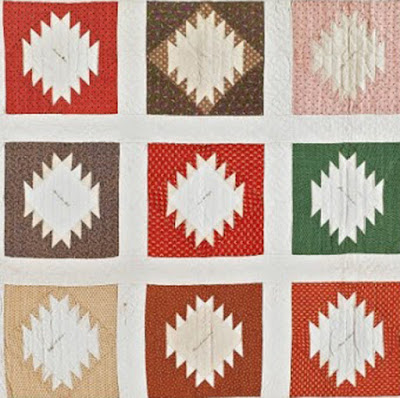 It's difficult to determine from the photos when the blocks were set together as
the setting fabric is a plain white cotton---offering only minimal clues to the
Quilt Detective. The horizontal grid of setting strips is also no clue. 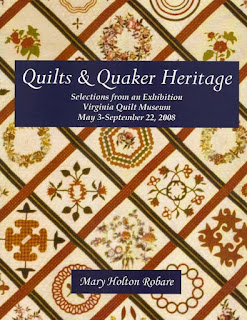 This may be the family with whom Mary Payne lived: 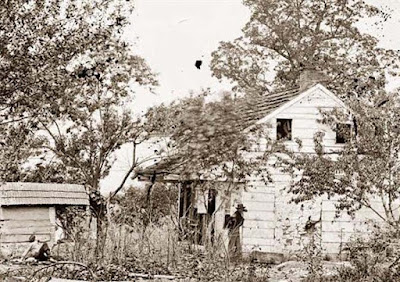 A soldier examines bullet holes in the Brian (Bryan) house
following the Battle of Gettysburg.

After their return to Pennsylvania Kitty married Abraham Brian (1804-1879) and had two more children. Soon after Kitty died Abraham bought a farm on the Emmetsburg Road near Gettysburg. Pennsylvania, site of a future battle. Kitty Payne Brian's early death spared her that horrifying episode of American Civil War history. 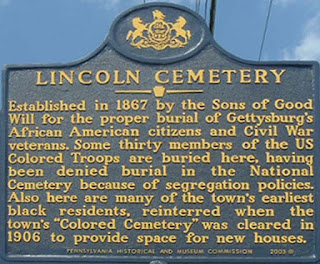 Kitty is now interred with second husband Abraham Brian and another of Brian's wives
at the Lincoln Cemetery at Gettysburg.

Mary Payne (1840 - 1928) married William Jackson. I believe her descendant Mary Jackson Goins Gandy is one of the family members who has kept the story alive.

On the Edge of Freedom: The Fugitive Slave Issue in South Central Pennsylvania By David G. Smith. Read about the Paynes in a preview here:
https://books.google.com/books?id=LRLwBwAAQBAJ&pg=PA99&lpg=PA99&dq=kitty+payne+bendersville+slave&source=bl&ots=V4SpOMBsWO&sig=qmIzam-XoHMcI8TIqiUVd7rp39E&hl=en&sa=X&ved=0ahUKEwii-KXFt-nOAhXHOSYKHQdNAcsQ6AEISTAI#v=onepage&q=kitty%20payne%20bendersville%20slave&f=false 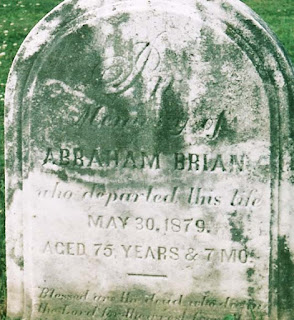 Kitty is buried with Abraham.

Each time I read about the Quaker community is one step more towards my entire admiration to these persons.