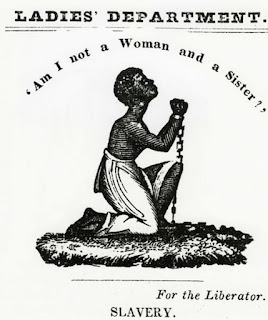 "Hannah S. P. Cotton [Whitney]...was one of the constructors of the remarkable patch-work quilt, sent by the Anti Slavery women of Boylston to Mrs. Chapman's great Fair of more than a half century ago and bought by Anti-Slavery women of Boston and presented to Mr. Garrison. It had a kneeling slave as a central figure and an Anti-Slavery sentiment written in every square."

This tantalizing line about Mrs. Daniel Whitney and the "remarkable patch-work quilt" is in a publication called Old Anti Slavery Days chronicling a Commemorative Meeting Held by the Danvers [Massachusetts] Historical Society in 1893. 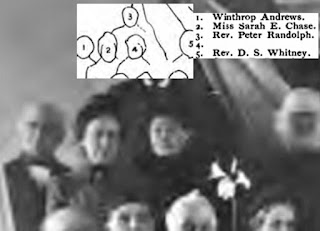 Perhaps the woman numbered 4 to the top left of the flower is Hannah Whitney.
Number 4 is unidentified in the 1893 reunion photo.
Number 5, the man with white hair and beard on the
right, is Rev. D.S. Whitney, her husband. 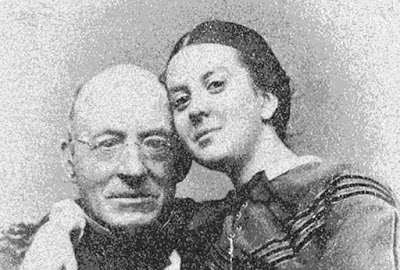 William Lloyd Garrison, editor of the radical abolitionist newspaper, the Liberator, seems to have been involved with more than one quilt, none of which survive with any links to such a story. 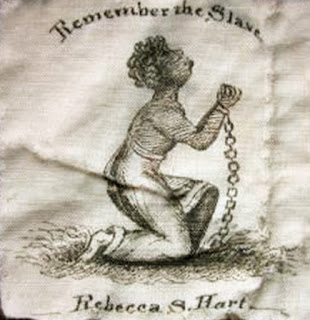 Image from the Wistar quilt in the collection of the
International Quilt Study Group and Museum,
made in Philadelphia.
2005.059.0001

We'd hope to recognize the value of a quilt with a central picture of a kneeling slave, the logo of the antislavery movement. At least two Pennsylvania quilts with that image survive but they aren't the Boylston quilt. 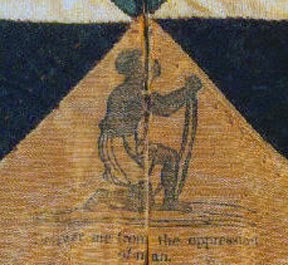 The Deborah Coates quilt,
also made in Pennsylvania
http://civilwarquilts.blogspot.com/2014_09_01_archive.html

Hannah Whitney's quilt is probably the same quilt that Mary Babson Fuhrer described in her book A Crisis of Community: Trials and Transformation of a New England Town, 1815-1848. The crisis over the churches and the reform movement resulted in a quilt donated by Boylston residents going to a "Garrisonian" antislavery fair in Boston where it was said to have been purchased by William Lloyd Garrison. a slight variation of the story. It was made in 1839, which coordinates with the story of the quilt made more than fifty years ago in 1893.
http://civilwarquilts.blogspot.com/2015/03/quilt-causing-crisis-of-community.html 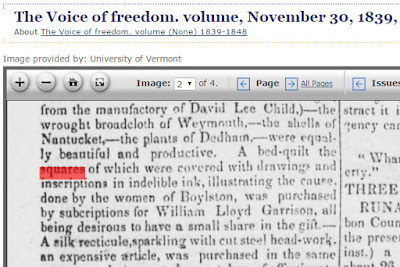 Here's another reference to the Boylston quilt from the
Voice of Freedom in 1839:

"A bedquilt the squares of which were covered with drawings and inscriptions in indelible ink, illustrating the cause, done by the women of Boylston, was purchased by subscriptions for William Lloyd Garrison, all be desirous to have a small share in the gift."

A second quilt with a Garrison connection was described in the Ohio Anti-Slavery Bugle on September 20, 1851. At an anti-slavery fair in Leesburg, Virginia (conducted, it seems, by some very bold people in a slave-holding state):


"On the background hung a most beautiful quilt, for which sixteen dollars was paid, and the quilt dedicated to the great pioneer, W.L. Garrison, as a token of the attachment of the friends to him personally, for his unwavering fidelity in the slaves cause." 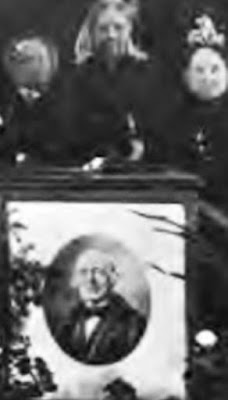 Lucy Stone stands behind a portrait of Garrison
at that 1893 reunion. 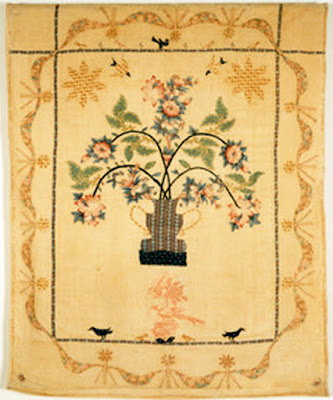 See a post on this quilt made by Garrison's mother:
http://quilt1812warandpiecing.blogspot.com/2012/08/a-new-england-applique-fanny-lloyd.html

Suggestions for further research:
Whitney family papers are in Santa Barbara at UCSB's Davidson Library. Perhaps there is mention of the quilt made in Boylston.

Advertisement for an 1857 Antislavery Fair
in North Abington, Massachusetts
at which Garrison was a speaker.
Posted by Barbara Brackman at 6:00 AM

Interesting story!
This reminds me of a new kind of slavery: all these poor refugees arriving everyday on the coasts of Sicily, running away from persecution and civil war, hoping to find freedom and a new life, but often they find unscrupulous people who submit them to slavery, forcing them to sell themselves or washing car windows at traffic lights.
All this makes me very sad and makes me see that everything in this life is repeated in a cycle that never seems to have an end.
We must be united and stand before the evil to defend the freedom of mankind.
Thanks Mrs. Barbara for this amazing post.

Very interesting ♥ Have a great week ♥