Knit Yourself a Sontag 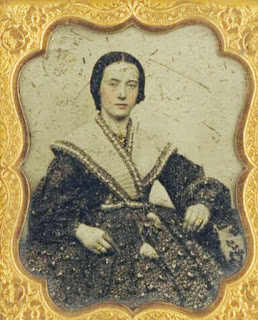 If you're looking for an authentic Civil War craft project to fill those evening hours in re-enactment camp after you've done the dishes you can knit yourself a small triangular shawl or a sontag. 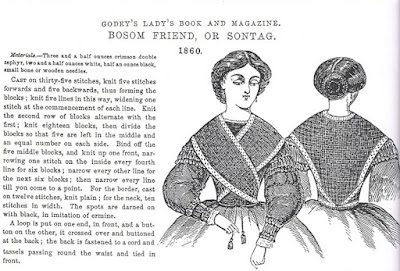 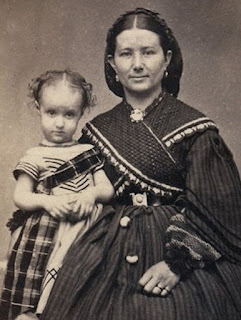 Several patterns were published during the Civil War. 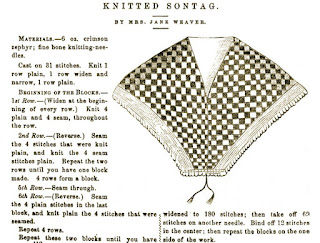 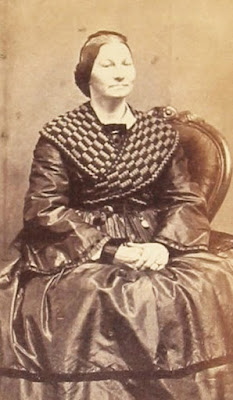 And you get the feeling that people followed the patterns
(approximately). 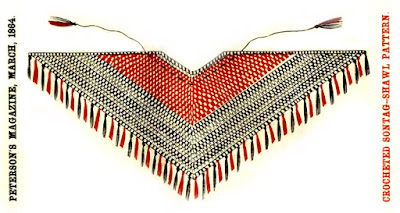 Peterson's
There were crocheted and knotted versions. 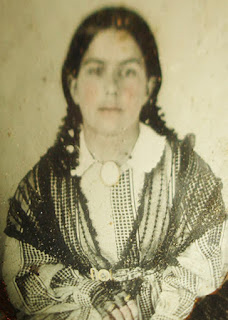 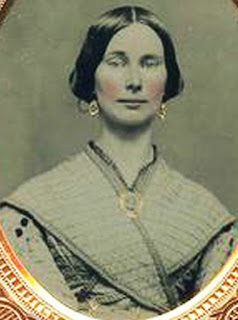 Doesn't this one look like tucked fabric
or quilted fabric but most knitters think it is knit.

The name? An early reference: In 1843 Miss Lambert in My Knitting Book gave directions for a sontag or Cephaline, a cap. 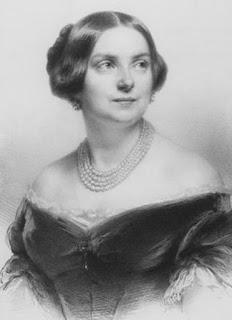 The shawl seems to have been named for Henriette Sontag (1806-1854) a German opera star.
(Perhaps her shoulders looked cold.) 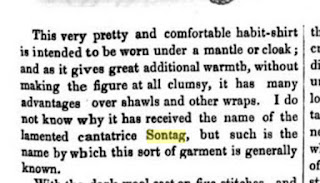 The Illustrated Magazine gave a pattern for a
"habit shirt".
"I do not know why it has received the name of the lamented cantatrice Sontag,
but such is the name by which this sort of garment is generally known."

Vocabulary Lesson
Cantatrice - a singer
Sontag, Habit Shirt and Bosom Friend----- a small shawl
Cephaline - something to wear on your head???

http://www.masshist.org/blog/574
Posted by Barbara Brackman at 6:00 AM

The pattern for the top Sontag from Godey's is available free and updated to modern terminology on www.ravelry.com

A patten for the other "Sontag Cape" like the second black and white pattern you show is available on Ravelry for $5.

Sign into Ravelry (almost every serious knitter in the US and UK uses it, no problems) and search for Sontag or try this link:

Another free updated pattern of the Godey's sontag is posted here:

A reenactor has blogged about knitting this and her photos are helpful to understanding its construction:

Photos from all angles:

Barbara, I'm not sure the lovely silk shawl you include would be considered by most to be a Sontag. The Textile Museum cataloged it as a large shawl. The difference between a Sontag and a shawl or a shawlet is that the Sontag has the ends buttoned or tied down so that the garment can warm the wearer and stay in place handsfree while the wearer goes abut her busy life. Anyone who has worn a triangular shawl knows that they are the devil to keep in place, even if a pin or knitter's stickpin is used.

Although "Sontag" is as you say a 19th C name and there are said to be many Civil War era photos of the garment, most likely the garment (like a lot of quilt patterns) is older than its name. Possibly it originated in Eastern or Western Europe as an everyday wrap to warm the bodice area while performing household tasks. Many cultures in cold climates had other versions of knitted outer garments designed to warm the back and chest while enabling the wearer to work. Perhaps they went well with the quilted petticoats.

Thanks for posting this. If I still had a waistline, I would make one;-)

You always share such fascinating information. I could use a Sontag today, as the weather has turned chilly.

This was really neat to read. I often wondered about that shawl I saw so many times in pictures. Way cool!

I too wondered about this shawl. Wonderful info. Thanks, LJ

So very interesting. So that is what those shawls were called. They do appear in many photographs/etchings from that time era. Thank you for the information.

My grandmother used to wore a shawl like the Peterson's, and she tied it in the back with a ribbon. When I was 4 years old a great aunt made me a crocheted shawl in two color layers. Thanks for the beautiful post!