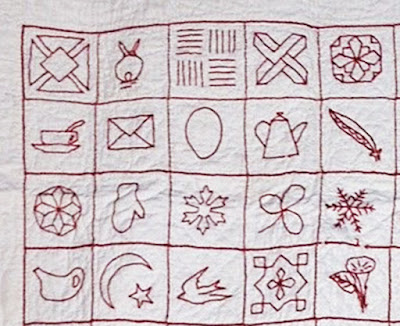 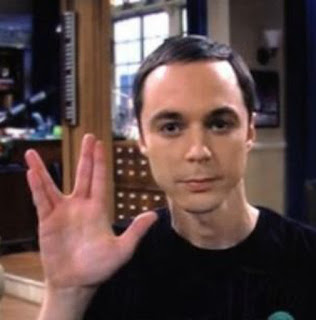 What's it all mean?

Symbolism is so dependent on the context of culture and time. 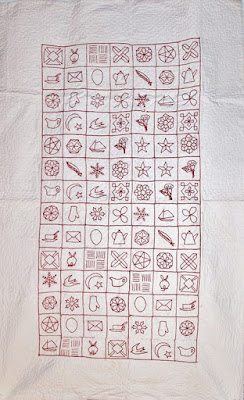 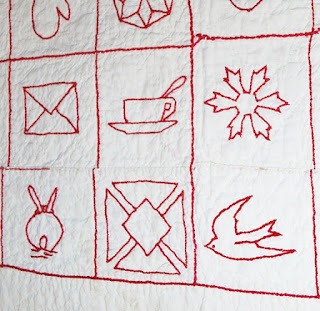 The back-end view of the rabbit is cute.
Does it have any meaning besides "cute'? 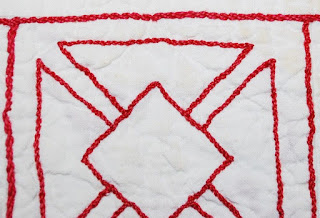 The Maltese Cross next to it is repeated four times. 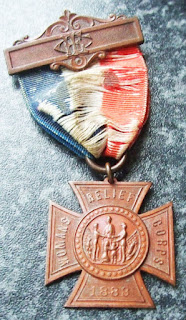 Could there be some reference to the Women's Relief Corps
veteran's auxiliary? 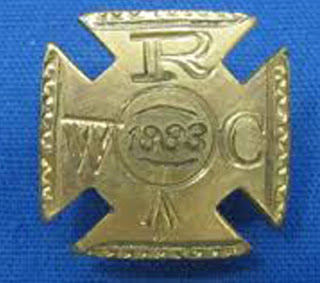 WRC pin
The date in the center 1883 refers to the organization's birthdate.
The WRC was an arm of the Grand Army of the Republic,
the largest Union veteran soldier's organization after the Civil War. 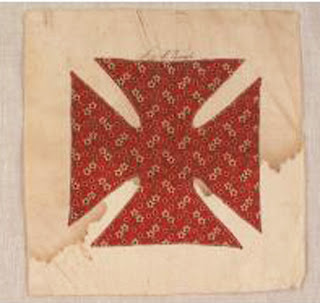 Quilt block in the collection of the New York Historical Society

Or is it just a geometric shape? 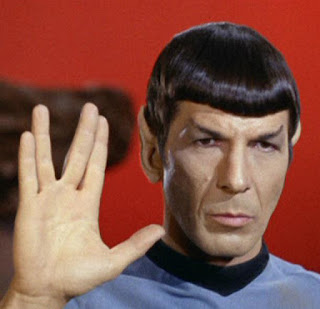 EVERYBODY knows the Vulcan hand sign today.
Did everybody know what a Maltese Cross meant a century ago? 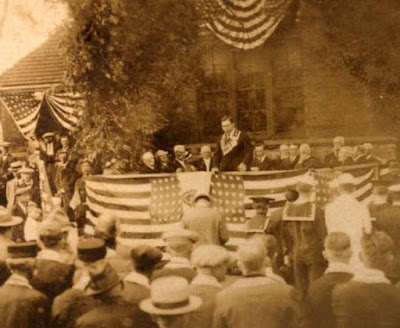 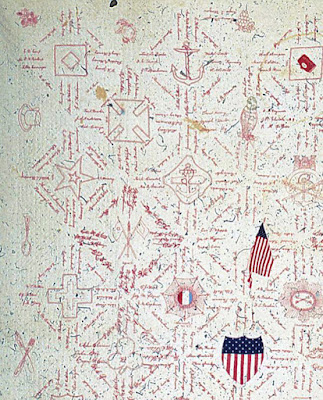 Detail of the Grand Army Quilt by Anna Morgan
From the Arizona project and the Quilt Index
http://www.quiltindex.org/fulldisplay.php?kid=67-EC-884 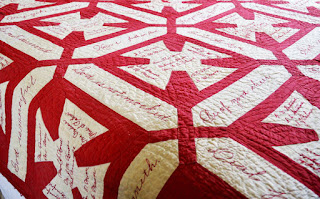 A pieced and embroidered redwork quilt dated 1901
from a recent online auction. 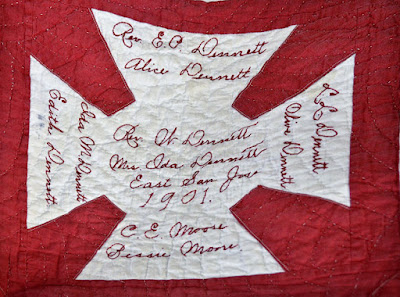 Most of the quotes are Bibilical
but why the Maltese Cross? 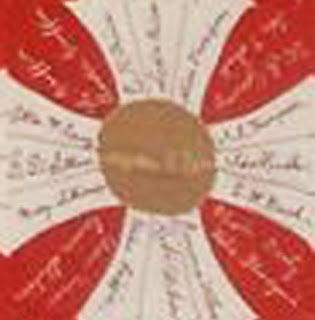 See two other posts on quilts with Maltese Cross blocks 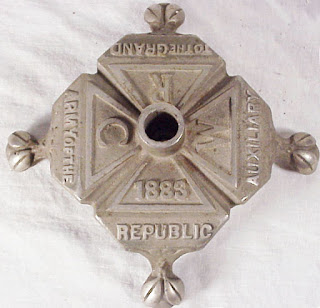 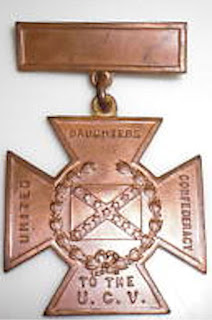 But just so I don't get too confident that I know
what's going on---I notice the United Daughters of the Confederacy
use the same emblem. 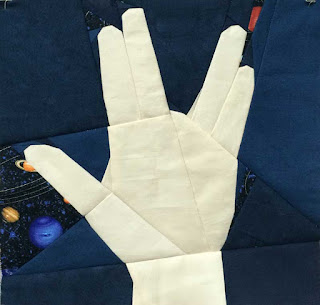 I think if you click on Spock you get the hand and vice versa.
Posted by Barbara Brackman at 6:00 AM

I'm so glad you showed the Daughters of the Confederacy symbol as well. I was familiar with the WRC symbol and then was shocked to see a medal in the shape of a Maltese Cross pinned on a Confederate veteran in a friend's genealogy. Ironically, this man, very old when the photo was taken in the late 19th Century, was a veteran but one who had resisted conscription as long as possible and who had deserted at his first opportnity and spent the remainder of the War behind Union lines. The medal of the Daughters of the Confederacy was presented to him by a descendant who had joined that organization. Did she know his true history? Was he still mentally competent when she pinned this on him? Did he just not wish to pass along his true story in an age when it was fashionable in Texas to be proud of a Confederate heritage? They did not have service records of the Confederate soldiers immediately at hand to do research at this time. I suspect this same scenario occurred frequently in the Confederacy as the reality of the War was forgotten and the Confederacy took on a more romantic aura.

I have read an interview with Leonard Nimoy about The Vulcan Hand Signal. Nimoy was Jewish. He said he used an olden Jewish hand signal (part of a Jewish rite?) when they needed something for Spock to do that was unique.

Thank you for an always interesting look into our quilting past.

Always here the fine questions -and answers! Signs, symbols in different ages are so interesting.
A special sign to mention too is the svastika, a multi-cultural ancient symbol for goodness and luck until the 1930s. That is why many quilters used to piece such a beautiful sign, many embroiderers used to stitch it too, until it became a symbol of atrocity.

What an eclectic group of symbols! Why peas in a pod? A coffee pot? Vertical and horizontal lines? Of all of them, the Maltese Cross is the easiest to associate. I can imagine a similar piece of embroidery as the key to a mystery -- a treasure hunt!

Thanks for sharing. You write about things I didn't know and show case great old master piece quilts.