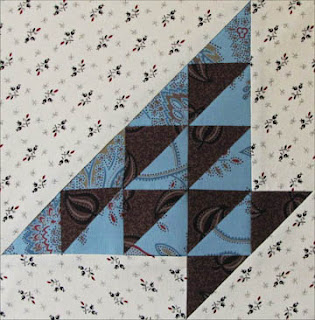 Little Blue Basket
The name has two meanings. The pattern is literally a little blue basket and it also can recall the Little Blue, a river in western . The Little Blue formed valleys and caves along the Kansas/Missouri border, a landscape that provided hiding places and refuge for Confederate guerillas during the Civil War. 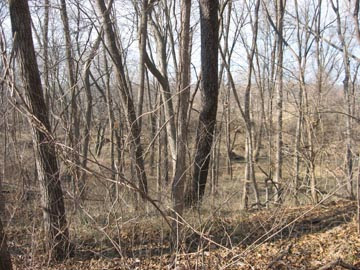 The word river for the Little Blue seems a little uppity.
It might better be called a creek.
In the spring of 1861, 22-year-old John McCorkle from , , joined the Confederate Army in . The regulars soon retreated to and points south as the Union Army quickly took control of the state.
remained a Union state despite a good deal of secessionist sympathy in rural areas. When Southern troops retreated, McCorkle deserted rather than travel south with the regular Confederate Army. His intention to live peacefully at home was interrupted, he wrote, when the Federals attempted to impress him into the State Militia by threatening his cousin Millie with imprisonment if he refused to join. Women were not often jailed, but conditions in quickly deteriorated to the point where revenge, recrimination and murder of civilians, both men and women, became too common. McCorkle attended this 1914 reunion of the Bushwhackers.
Their bloodiest guerilla attack was led by
William Quantrell (in the framed portrait) whom they revered.
The guerrillas along the border between free-state and slave-state were known as Bushwhackers. McCorkle and his family and friends survived in the bush through aid from their sisters, mothers and sweethearts who carried baskets full of food to their camps, washed their laundry and sewed their clothing. The Little Blue Basket recalls the women who set out after dusk in the evenings, carrying baskets of food into the woods near the Little Blue River. 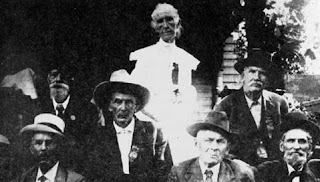 Lizzie Wallace was photographed
with the men at the 1920 reunion
The basket pattern was popular at the time of the Civil War. This one was published as Pieced Baskets in Marie Webster's 1915 book Quilts: Their Story and How to Make Them. It's #664 in my Encyclopedia of Pieced Quilt Patterns and the digital version BlockBase. The basket in Webster's book had a curved, appliqued handle.
Cutting an 8" Finished Block
A - Cut 1 light square 7-1/4". Cut in half with a diagonal cut to make 2 triangles. You need 1 light triangle A. 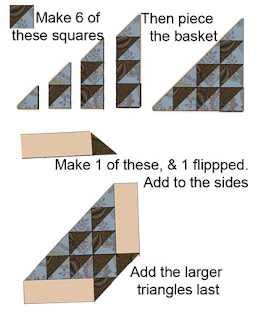 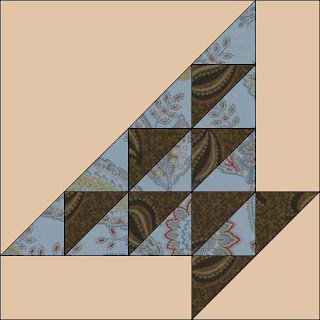 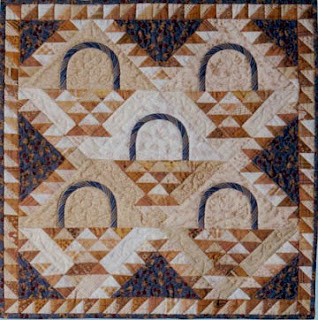 Little Blue Basket by Karla Menaugh, 2003
Karla added a bias strip handle and a lot of sawtooth triangles to the edge of this quilt patterned in our 2003 book Butternut and Blue. Click here for more information about the book:
http://www.quilterswarehouse.com/p-6533-butternut-blue-by-sunflower-co-op.aspx 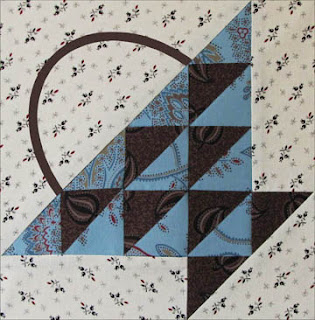 And Becky did a version with an appliqued handle.
Through his memoirs, John McCorkle did something towards shaping our view of the Civil War in western

His war story was inspiration for the fictional Woe to Live On by Daniel Woodrell, which in turn inspired the 1999 Ang Lee film Ride With the Devil. 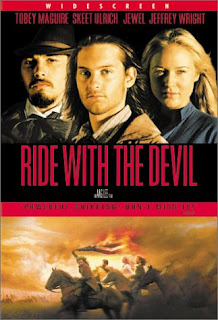 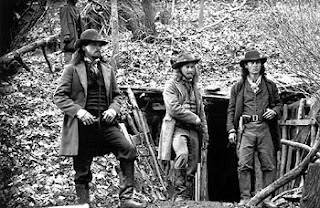 The boys out in a hut built into the banks
of the Little Blue in Ride With the Devil.
Read Woodrell's novel and see the film Ride with the Devil, starring Tobey McGuire as the fictional Jake. Jewel's character represents the women with the baskets along the Little Blue. (Disclosure: I worked as a researcher on that movie but I had nothing to do with that pink and blue baby blanket in the last part of the movie.)
Watch the Criterion edition, a new cut. Read more here:
http://www.criterion.com/films/17282-ride-with-the-devil
Read McCorkle's side of the Civil War in his 1914 book on line by clicking here:
http://openlibrary.org/authors/OL841275A/John_McCorkle
Three Years with Quantrell: A True Story Told by His Scout John McCorkle, by O.S. Barton, 1914.
Posted by Barbara Brackman at 6:00 AM

I particularly love this post because I am from Savannah and now live in Lee's Summit...not far from the Little Blue River. Thanks!

a wonderful block. I love it...but it needs experience, especially for a 4" block.
but I love to do this.

love the block and the wonderful history. I will be listening to the book too. Thanks

Great post I so look forward to your lessons! Thanks

Thank you for another wonderful block. Baskets are my favorites, and the Butternut and Blue is my favorite of your books. I'll have fun making this one later this week.

Another movie loosely based on Quantrell's Raiders was Dark Command, 1940 starring John Wayne, Claire Trevor and Walter Pigeon. You can see it on Turner Classic Movies from time to time.
http://en.wikipedia.org/wiki/Dark_Command

These civil war gals really loved their little triangles didn't they ;)
Thanks for another block!

Thanks Barbara, I love basket block and love the triangles as well. Appreciate it, thanks - Hugs Nat

Thanks a lot fot this new block and the story !
Hugs from France,
Sylvie

Thanks for the informative posts. I look forward to reading about another segment of the era. The blocks add so much to the story. Thanks again, Alexis

Another great example of the courageous women at that time. I've watched the movie a few years ago and it was quite memorable.
Thanks for the block. We should all be good at triangles by the end of the year.

Very interesting post and pattern. I have completed my block and posted it on my blog along with a short how-to.
http://lillianscupboard.wordpress.com/2011/03/27/civil-war-quilt-block-13-little-blue-basket/

I love this blog, Barbara! I do not have time to start this now, so I am saving the blocks in EQ, for hopefully later this year. My only "complaint" is those "Seven Sisters!" Oh, no!! LOL
Thanks for all of your great work, especially your encyclopedia.

I recently watched the movie but was so engrosed in it I didn't even notice the pick and blue blanket at the end. ;-)

Thanks , Like the story and working on my block today, thanks again!!