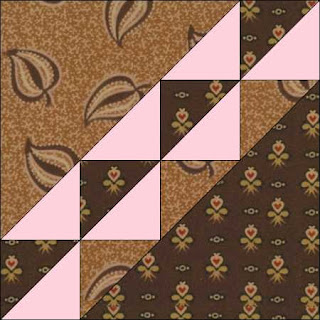 London Square
London Square recalls Great Britain's role in the American Civil War. England was our greatest trading partner and cotton was the currency. Many in England supported the emerging Confederacy with its crop that was so vital to the English economy. 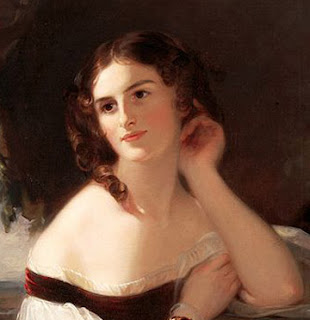 Fanny Kemble
painted by Thomas Sully
Among the English who were horrified by the thought of a new independent slave-based nation was actress Fanny Kemble. Through her writing she changed attitudes and the course of the American Civil War. 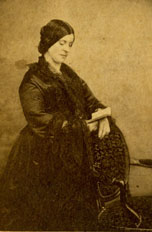 Fanny about the time of the Civil War
Frances Anne Kemble was born into a prominent theatrical family in and became an American celebrity during a tour in the 1830s. Beautiful, bright and spirited, she fell in love with Pierce Butler, a member of a powerful and wealthy Southern family, temporarily living in . 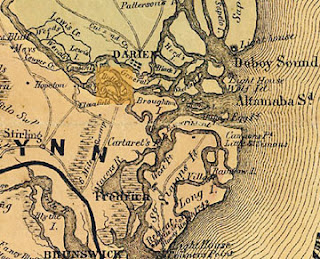 The Butler rice plantations were in the Georgia delta
of the Altamaha River on St. Simon's Island and nearby islands.
See the darker yellow square for Butler's Island south of Darien.
After their marriage, she accompanied him home to his rice plantations where she discovered the enormous fortune was based on slavery, a system she could not accept. While there, she kept a detailed journal in the form of letters, recording slavery's horrible human toll. 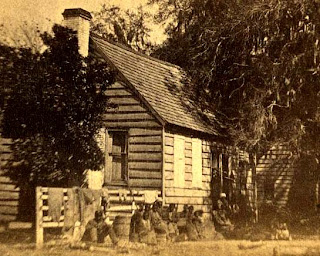 "The Nursery" on Hilton Head Island in 1862 or 63.
Library of Congress
Fanny's accounts include much about motherhood in slavery.
The marriage suffered from Fanny's attitudes about slavery and a woman's place, as well as from Pierce's neglect and bullying. In 1849 they obtained a very public divorce in which Fanny lost custody of her daughters and gained a national reputation as a scandalous woman. 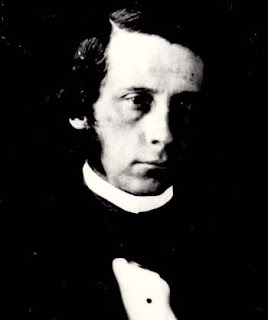 Pierce Butler at the time of the divorce, 1849
When the Civil War broke out she was back in , distressed to find British politicians favoring the South. The Confederacy hoped to win British recognition, a diplomatic gesture that would go a long way to establishing its legitimacy as a nation rather than as a mere rebellious region. 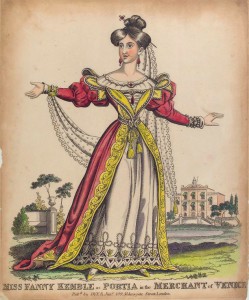 Fanny realized she could use both her fame as an actress and her skill as a writer to convince the English that the Southern cause was wrong.

"I have sometimes been haunted with the idea that it was an imperative duty, knowing what I know, and having seen what I have seen, to do all that lies in my power to show the dangers and the evils of this frightful institution."

She published her Journal of a Residence on a Georgia Plantation in London in 1863. The shocking book changed public opinion, influencing England to remain neutral during the War. 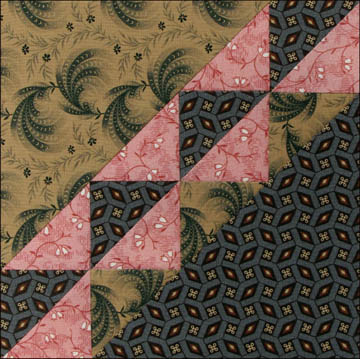 London Square by Becky Brown
London Square is a variation of the popular late-19th-century design also called Ocean Waves. (See #3163 in BlockBase.) The name was published by the Famous Features syndicate in the mid 20th century. We can use it to recall Fanny Kemble's courageous and clever move to shape public opinion. 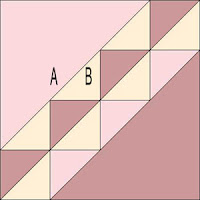 Cutting an 8" Finished Block
A - Cut a dark square and a medium square 6-7/8". Cut each in half with a single diagonal cut. You need one dark and one medium triangle. 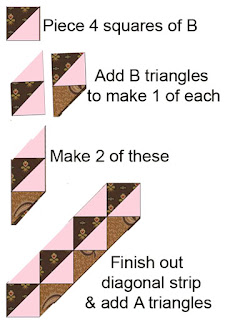 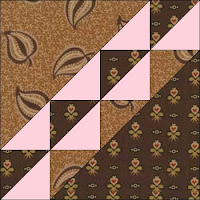 While you sew you can watch a dramatization of Fanny Kemble's marriage. Enslavement: The True Story of Fanny Kemble was released in 2000 starring Jane Seymour as Fanny and Keith Carradine as one of the top ten bad husbands ever. Click here to read more:
http://www.imdb.com/title/tt0236195/ 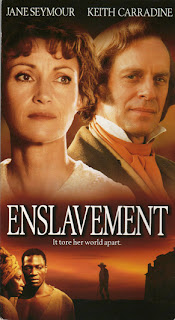 Read  Journal of a Residence on a Georgia Plantation in London at Google Books.
Click here:
http://books.google.com/books?id=K3ZCAAAAcAAJ&printsec=frontcover&dq=journal+residence+georgia+plantation&hl=en&ei=5x0yTbC5GYb3gAfZ4Pm2Cw&sa=X&oi=book_result&ct=result&resnum=1&ved=0CCcQ6AEwAA#v=onepage&q&f=false

But beware: Fanny did not pull any punches in describing the horrors of slavery in these letters. It is not a pleasant read.

Thanks again Barbara for releasing another beautifull block and a great story of a strong woman with it. Greetings from the Netherlands

Shouldn't have checked my blogs before bed tonight... I haven't done last weeks block yet!! Better catch up this week, don't want to get too far behind.

As always, thanks for the wonderful insight into the American Civil War. Being from the other side of the world, I actually don't know much about the war other than it involved slavery and women wore lovely dresses (I studied costume). It's nice to actually find out some real facts about your history, and what women of the time were doing.

I miss seeing that movie. Will have to do that. Or find that book! Love the block and great story!

I just love the strong women from the Civil War era - thank you for sharing her story and the block is very beautiful! Jane Seymour is a wonderful actress - always have enjoyed her work.

Thank you for the block this morning, I have never heard the story about Fanny, I would really like to see the movie.

Very interesting that Fanny lost her children in the divorce. I am inspired by your post to learn more about her and her life. I will be looking for the book or movie! Thank you!

I would guess that Fanny was a feminist and social activist before it was politically correct to be one! good for her!!! Wonderful story, thankyou for such wonderful insights into the lives of these strong women! Love the block, wonderful design!!!

Loved the story about Fanny and her influence on the British people during the war. I have completed my block and posted it along with a how-to on my blog.

Thanks Barbara for the wonderful block and such a great story. I hope I can find the book as it sounds like a good read.

Read the book by Fanny while living in the south, have visited one of the old rice plantations on the Altmaha River, and explored St. Simons Island a few times. Interesting, to read how Fanny lived while in the south. Any fiction fans out there I highly recommend books written by Eugenia Price, originally published as fiction, I would say historically based fiction, now found in the romance section. Most based on real people, places and events in the Savannah and the Sea Islands of Georgia from the Revolution to Civil War life in the south.

Thank you for this blog. As an Aussie I don't know this history very well. Thank you for the stories, the history, the quilts the links and the sewing! Kathy

Thanks for this weeks block . I was born in London and live in the UK. I really now feel part of the Civil War Quilt.

Thanks Barbara, another great block. Love the variation of color in this block. It will be a fun block to make - Hugs Nat

I love that women, thanks to her, we are here. I'm afraid that after I have a beautiful quilt, I will have a big list of books to read... thank you so much for you're blocks and stories.

Thanks a lot, Barbara, for sharing with us these beautiful blocks and all the stories !
I'm French and I don't know Civil War history very well. So, this blog is very interesting for me !
Thanks again !

Again you deliver a wonderful insight into 'real' history ....a brilliant read.One day I may need your patterns ...I really want to have a go at patchwork

Thank you for all the work you're putting into this blog! I'm really enjoying the blocks.
Can't wait to try this one!
Penny
ChezPlatypus.blogspot.com

Another book that has Fanny Kemble in it is "Where Shadows Go" by Eugenia Price. The book is a historical novel, but is true to the history of the time. Eugenia Price has written several books about the south that are fascinating.

Very nice those blocks, and the explications behind it . Greetings from Bruges Carine

Many thank you for sharing a brave women's story and the blog is very beautiful.
linkbuilding software