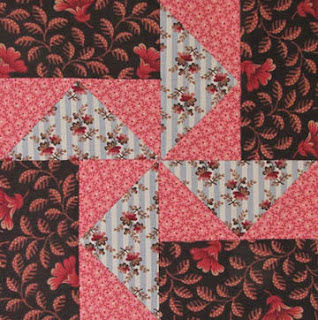 Louisiana can represent the Morgan family and all the Southern soldiers.

Love what you are doing here with the block and giving readers the CW history.
Our country's history is so precious. It breaks my heart when I run into people everyday that don't know it and don't seem to even care to learn. God Bless you Barbara and all your readers.

Love all of the old pictures. I have completed my block and posted it on my blog along with a how-to.
http://lillianscupboard.wordpress.com/2011/03/19/civil-war-quilt-block-12-louisiana/

Thank you for the story of Sarah, and for the wonderful pictures. The block is a favorite of mine, but I haven't made it in 8" size before.

great colors on the quilt block pink seems to be my color right now.
marilyn

Such heartbreaking stories. Thank you for posting, Barbara. I'll post my block in the flickr group as soon as I'm finished.

Just found out about this blog and am so excited. I am a fan - of Barbara and her quilts and now this blog. I made the Lincoln quilt this past year (although out of civil war fabrics - not homespuns) and it turned out great. Thanks for this great blog. Now you have given me one more project for my UFO bin!!!

I would love to make these but I
d like a 12.5" block. Are there any online options for converting the block size?

I have your civil war sampler book and am trying to make this Louisiana block 12x12 and using the measurements on pg. 7 doesn't come out right. The rectangle is too small. If I increase it to 71/2 the other dimensions will fit but the block is too big. Is there a change in measurements for this block. Also any other blocks in this book??? I am on #12 Louisiana block. Thank you. Sharon at rsmart@metrocast.net

I am bold enough among many others to state that there is now a potent cure to this sickness but many are unaware of it. I discovered that I was infected with the virus 3 months ago, after a medical check-up. My doctor told me and I was shocked, confused and felt like my world had crumbled. I was dying slowly due to the announcement of my medical practitioner but he assured me that I could leave a normal life if I took my medications (as there was no medically known cure to Herpes). I went from churches to churches but soon found that my case needed urgent attention as I was growing lean due to fear of dying anytime soon. In a bid to look for a lasting solution to my predicament, I sought for solutions from the herbal world. I went online and searched for every powerful trado-medical practitioner that I could severe, cos I heard that the African Herbs had a cure for Herpes syndrome. It was after a little time searching the web that I came across one Dr God hands herbal treatment (A powerful African Herbal Doctor), who offered to help me at a monetary fee. I had to comply as this was my final bus-stop to receiving a perfect healing. My last resolve was to take my life by myself, should this plan fail. At last it worked out well. He gave me some steps to follow and I meticulously carried out all his instructions. Last month, to be precise, I went back to the hospital to conduct another test and to my amazement, the results showed that negative,Dr God hands Can As Well Cure The Following Desease…Cancer,Hiv,Herpes,Shingles, Hepatitis B,Liver Inflammatory,Diabetes,Fibroid,Parkinson's,Alzheimer’s disease,You can free yourself of this Herpes virus by consulting this great African Herbal Doctor via this email: doctorgodhands@gmail.com  He will help you and his herb medication is sure. he has the cure on all disease .You can talk to me on INSTAGRAM..tashamoore219.